Inventories grew at a $115.9 billion annual rate in the third quarter, the highest rate of increase since a $117.2 billion rise in the first quarter of 1998.  This increase added 1.44 percentage points to growth for the quarter, bringing the rate to 2.0 percent.

Final demand growth, which excludes fluctuations in inventories, was just 0.6 percent in the quarter.  Final demand growth has averaged just 1.0 percent in the five quarters since the recession officially ended in the 2nd quarter of 2009.  This is noteworthy since it is unlikely that the rate of inventory accumulation will accelerate still further in future quarters.  In fact, it is likely to slow to a more normal pace, especially if some of the accumulation in the third quarter was involuntary.  This means that GDP growth in future quarters will more closely track final demand growth.

The biggest contributor to GDP growth was consumption, which grew at a 2.6 percent annual rate and added 1.79 percentage points to growth.  The category housing and utilities added 0.42 percentage points to growth, almost a quarter of the contribution from consumption.  This was likely the erratic utilities side, as households used more energy than is typical due to unusually hot summer weather.

Equipment and software investment grew at a healthy 12.0 percent annual rate.  This is down somewhat from the 19.8 percent average annual rate of growth in this component over the prior three quarters.  Uncertainty about taxes, regulations, or other matters has not prevented businesses from expanding investment rapidly over the last year. 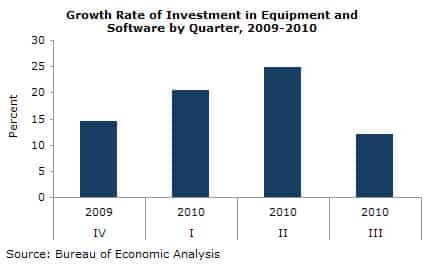 Investment in non-residential structures rose at a 3.9 percent rate in the quarter, reversing eight straight quarters of decline.  The overbuilding in this sector is likely to lead to declines in future quarters.

Residential investment fell at a 29.1 percent annual rate, subtracting 0.8 percentage points from growth in the quarter.  This more than reversed the 25.7 percent increase in the second quarter.  The story here is the ending of the homebuyer tax credit.  The fees associated with house sales appear as residential investment.  With the plunge in sales in the third quarter, the drop in investment in this sector was expected.

Trade was a big negative in the quarter, subtracting 2.01 percentage points from growth.  The 17.4 percent growth in imports swamped the 5.0 percent growth rate of exports.  The deficit is likely to expand somewhat less rapidly in future quarters if the pace of inventory accumulation slows, since a substantial portion of inventories is imported.

The government continued to contribute positively to growth in the quarter, adding 0.68 percentage points to growth.  An 8.8 percent rise in federal spending more than offset the impact of a 0.2 percent fall in spending at the state and local level.  With the stimulus winding down rapidly in the next two quarters, and state and local governments facing large shortfalls, this sector is likely to be a drag on growth in the quarters ahead.

This report suggests a picture of an economy that may be skirting zero growth in the next two quarters primarily because of the extraordinary inventory jump.  The rate of final demand growth has averaged just 1.0 percent over the last five quarters.  The stimulus is winding down over the next two quarters, which will be a substantial drag on growth over this period.

In addition, house prices have resumed their fall, which is likely to further depress consumption.  The savings rate, at 5.5 percent, is still below the long-term trend of 8.0 percent.  As homeowners increasingly recognize that their home equity is not going to return, they will likely adjust their consumption rate downward.  This adjustment will occur more quickly if homeowners become concerned over the plans of many in Washington to cut Social Security benefits.  Given their current wealth, at this point, baby boomers will have little other than their Social Security to rely on in retirement.

Dean Baker is co-director of the Center for Economic and Policy Research (CEPR).  He is the author of False Profits: Recovering from the Bubble Economy.  He also has a blog Beat the Press, where he discusses the media’s coverage of economic issues.  This article was first published by CEPR on 29 October 2010 under a Creative Commons license.