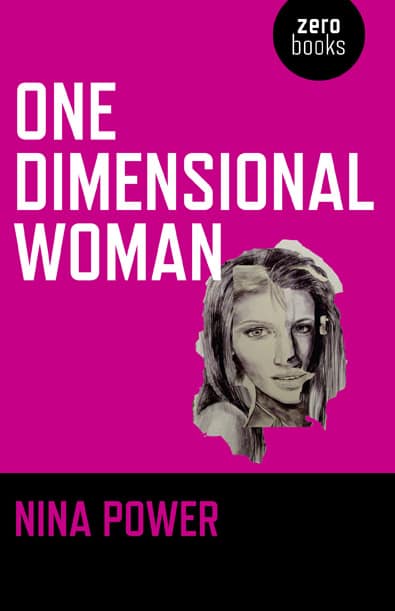 Nina Power’s One Dimensional Woman is a slim but muscular volume, whose pithy prose goes straight to the heart of the challenges currently facing contemporary feminism.  Constructed as a series of short, cut-to-the-chase essays on a diverse range of ‘raw-nerve’ topics, from Sarah Palin and the War on Iraq to the veil and pornography, the chapters of this book are nonetheless tightly connected by their consistent critique of capitalism’s unnerving ability to co-opt and paralyse radical thought and action.

Rather than simply accept that feminism has been hijacked by conservative agendas, Power takes this state of affairs as her starting point, and she thus succeeds in moving the arguments forward considerably.  While some feminists are still grappling with young women’s rejection of the term (“I’m not a feminist but. . .”) Power is several steps ahead.  She rightly argues that feminism is very much in vogue again — it describes everything from Sarah Palin’s pro-life campaign to the confidence-building powers of pole-dancing — and she then proceeds to deftly deconstruct its linguistic, political, cultural and economic co-option by various agendas for which equality is hardly a priority.

Power argues that feminism has been invoked and repackaged in the service of three major forces, namely imperialism, the labour market and consumerism.  Like Judith Butler, who argues that gay politics are now being mobilised to garner support for more stringent immigration laws and, in some cases, blatant Islamophobia1, Power points out major contradictions in the logic of secular liberalism, whereby feminism is called upon to justify war (in order to liberate oppressed Muslim women) by politicians otherwise oblivious to issues of gender equality.  Her analysis reveals the disturbing malleability of a liberal politics of gender and sexuality, which can be used to swing “fence-sitting, morally-minded voters” as easily as it can to sell more vibrators or entice women into poorly paid, unstable employment.

Given this ideological elasticity, Power wonders whether feminism is now too damaged and devalued a concept to service the advancement of gender equality.  Like Steven Poole, whose 2005 book Unspeak exposed the ideological deviousness behind neoliberal spin-doctors’ euphemistic use of language, Power fully understands what is at stake in the corporate rebranding of feminismTM and, by saying so, she effectively faces down the liberal marketeers of ‘choice’ and ‘freedom’.  “I know your game”, she shouts defiantly, “and I know how to operate outside it.”

This book is a serious wake-up call to anybody still deluded enough to accept the “sticking plaster pleasures” of the new feminism(s).  It exposes the deceptions of a non-movement which promises to make women feel better about themselves (by giving them handbags, shoes, vibrators and chocolate) but which never addresses why they might feel so bad about themselves in the first place.  Most importantly, it shows how imperialist, consumerist and managerialist forces have all co-opted a mantra of (pseudo)feminist liberation in the service of profoundly anti-equality agendas.  Power asks tough and, perhaps for some, shocking questions — why can’t a 15 year old have a child and become a brain surgeon?  Why can’t we live in constellations outside of the clearly dysfunctional nuclear family?  Why can’t we have pornography that is fun, emancipatory and celebratory of female pleasure? — but there is method to what some might consider to be her madness.  For, in order to answer any of these questions, we have to acknowledge the deep-rooted structural inequalities that continue to sustain both capitalism and patriarchy, and which the new feminisms have failed to disturb in any significant way.

While others, among them Natasha Walter, Rosalind Gill and Diane Negra, have paved the way towards debunking the great postfeminist myth of equality, Power drives the final nail into its coffin and sends it hurtling toward the flames.  Reading One Dimensional Woman reminded me of what it felt like when I first read The Female Eunuch 20 years ago.  Like Greer, Power combines a remarkably broad overview with razor-sharp focus, she is gleefully irreverent and she forces us to regard the world anew.  Most importantly, she revives the possibility of a transformative politics of gender in all its raw, un-airbrushed and angry beauty.  She thus represents an important new voice in contemporary feminism — for ultimately she decides to stick with and reclaim the term — which refuses to jettison questions of power, which insists on thinking still in global rather than western terms and which resists de-coupling itself from the politics of race, class and sexuality.

1  The online short film Fitna, made by Dutch parliamentarian Geert Wilders, is an excellent example of this.

Debbie Ging is a lecturer in the School of Communications and Director of the Research Centre for Society, Information and Media (SIM), Dublin City University.  This article was first published in Irish Left Review on 21 July 2010.  See, also, Johanna Brenner, “Free-Market Feminism” (Monthly Review, December 2010).