The Case-Shiller 20-City index showed a sharp decline in prices again in November, dropping by a full percentage point.  Nineteen of the twenty cities showed a decline in prices.  San Diego was the only city where prices rose, albeit by only 0.1 percent.  The 20-city index has fallen at an annual rate of 11.9 percent over the last three months and is down by 1.9 percent year over year.

The sharpest declines were in Atlanta, where prices fell by 2.5 percent in November, and the four Mid-western cities — Chicago, Cleveland, Detroit, and Minneapolis — all of which had price declines of at least 2.0 percent for the month.  The annual rate of price decline over the last three months in Atlanta has been 27.1 percent.  It was 23.3 percent in Cleveland, 21.8 percent in Minneapolis, and 21.7 in Detroit and Chicago.  These price declines are almost as sharp as the peak months of the housing bust in late 2008 and early 2009. 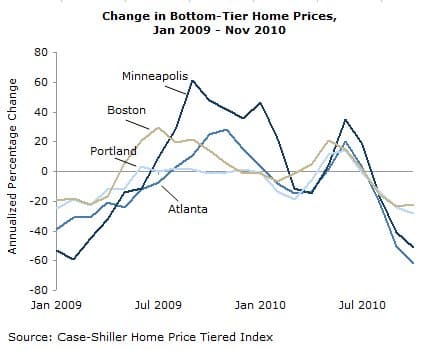 The sharp plunge in prices for homes in the bottom tier is consistent with the notion that the first-time buyers tax credit had been supporting the market.  The bottom segment of the market had substantial price increases in most cities in 2009 and held its own in the first half of 2010.  However, once the credit ended for homes contracted after April 30th and likely sold after July 1st, prices for this segment of the market went into reverse.

The price declines now showing up for the overall indexes in most cities indicate that the price drop for bottom-tier homes is now having an impact on the prices of more expensive homes.  This is predictable, since the sellers of bottom-tier homes are buyers of higher-end homes.

The sharp price declines in the Case-Shiller data appear to be somewhat out of line with the jump in existing home sales reported by the National Association of Realtors (NAR) last week.  The rise in sales was somewhat surprising since there was no notable rise in mortgage applications in the weeks at the end of October or the beginning of November that would be expected to be associated with this jump in sales.  This could suggest that investors are buying up blocks of homes and not relying on traditional mortgages for financing, or it may just be an anomaly in the data.

It is worth noting that the NAR data is still showing substantial price declines over this period.  Since the mix of homes sold would likely skew the NAR price index upward (fewer low-end homes are being sold, therefore the median and average price would be expected to rise, other things equal), its data is consistent with large price declines.

Dean Baker is an economist and Co-director of the Center for Economic and Policy Research, in Washington, D.C.  This article was first published by CEPR on 25 January 2011 under a Creative Commons license.