Since yesterday, and actually earlier, middle-class activists have been urging Egyptians to suspend the protests and return to work, in the name of patriotism, singing some of the most ridiculous lullabies about “let’s build new Egypt,” “let’s work harder than even before,” etc.  In case you didn’t know, actually Egyptians are among the hardest working people in the globe already.

Those activists want us to trust Mubarak’s generals with the transition to democracy — the same junta that has provided the backbone of his dictatorship over the past 30 years.  And while I believe the Supreme Council of the Armed Forces, who receive $1.3 billion annually from the US, will eventually engineer the transition to a “civilian” government, I have no doubt it will be a government that will guarantee the continuation of a system that will never touch the army’s privileges, keep the armed forces as the institution that will have the final say in politics (as for example in Turkey), guarantee Egypt will continue to follow the US foreign policy, whether it’s the undesired peace with the Apartheid State of Israel, safe passage for the US Navy in the Suez Canal, the continuation of the Gaza siege, or exports of natural gas to Israel at subsidized rates.  A civilian government is not about cabinet members who do not wear military uniforms.  A civilian government means a government that fully represents the Egyptian people’s demands and desires without any intervention from the brass.  And I see this as hard to be allowed, let alone accomplished, by the junta.

The military has been the ruling institution in this country since 1952.  Its leaders are part of the establishment.  And while the young officers and soldiers are our allies, we cannot for one second lend our trust and confidence to the generals.  Moreover, those army leaders need to be investigated.  I want to know more about their involvement in the business sector.

All classes in Egypt took part in the uprising.  In Tahrir Square you found sons and daughters of the Egyptian elite, together with workers, middle-class citizens, and the urban poor.  Mubarak has managed to alienate all social classes in society, including a wide section of the bourgeoisie.  But remember that it’s only when the mass strikes started three days ago that the regime started crumbling and the army had to force Mubarak to resign because the system was about to collapse.

Some have been surprised that workers started striking.  I really don’t know what to say.  This is completely idiotic.  The workers have been staging the longest and most sustained strike wave in Egypt’s history since 1946, triggered by the Mahalla strike in December 2006.  It’s not the workers’ fault that you were not paying attention to their news.  Every single day over the past three years there was a strike in some factory, whether it’s in Cairo or a province.  These strikes were not just economic — they were also political in nature.

From Day 1 of our uprising, the working class has been taking part in the protests.  Who do you think were the protesters in Mahalla, Suez, and Kafr el-Dawwar for example?  However, the workers were taking part as “demonstrators” and not necessarily as “workers” — meaning, they were not moving independently.  The government, not the protesters, had brought the economy to halt, by its curfew, shutting down banks and business.  It was a capitalist strike, aimed at terrorizing the Egyptian people.  Only when the government tried to bring the country back to “normal” on Sunday, workers returned to their factories, discussed the current situation, and started to organize en masse, moving as a bloc.

The strikes waged by the workers this week were both economic and political, fused together.  In some of the locations the workers did not list the regime’s fall among their demands, but they used the same slogans as those protesting in Tahrir, and in many cases — at least those I managed to learn about and I’m sure there are others — the workers put forward a list of political demands in solidarity with the revolution.

These workers are not going home anytime soon.  They have been emboldened by Mubarak’s overthrow.  They started strikes because they couldn’t feed their families anymore.  They cannot go back to their children and tell them the army has promised to bring them food and their rights in I don’t know how many months.  Many of the strikers have already started raising additional demands of establishing free trade unions, distinct from the corrupt, state-backed Egyptian Federation of Trade Unions.

Today, I’ve already started receiving news that thousands of Public Transport workers are staging protests in el-Gabal el-Ahmar.  The temporary workers at Helwan Steel Mills are also protesting.  The Railway technicians continue to bring trains to halt.  Thousands of el-Hawamdiya Sugar Factory are protesting, and oil workers will start a strike tomorrow over economic demands and also to impeach Minister Sameh Fahmy and halt gas exports to Israel.  And more reports are coming from other industrial centers.

At this point, the Tahrir Square occupation is likely to be suspended.  But we have to take Tahrir to the factories now.  As the revolution proceeds, an inevitable class polarization will happen.  We have to be vigilant.  We shouldn’t stop here.  We hold the keys to the liberation of the entire region, not just Egypt.  Onwards with a permanent revolution that will empower the people of this country with direct democracy from below. . . . 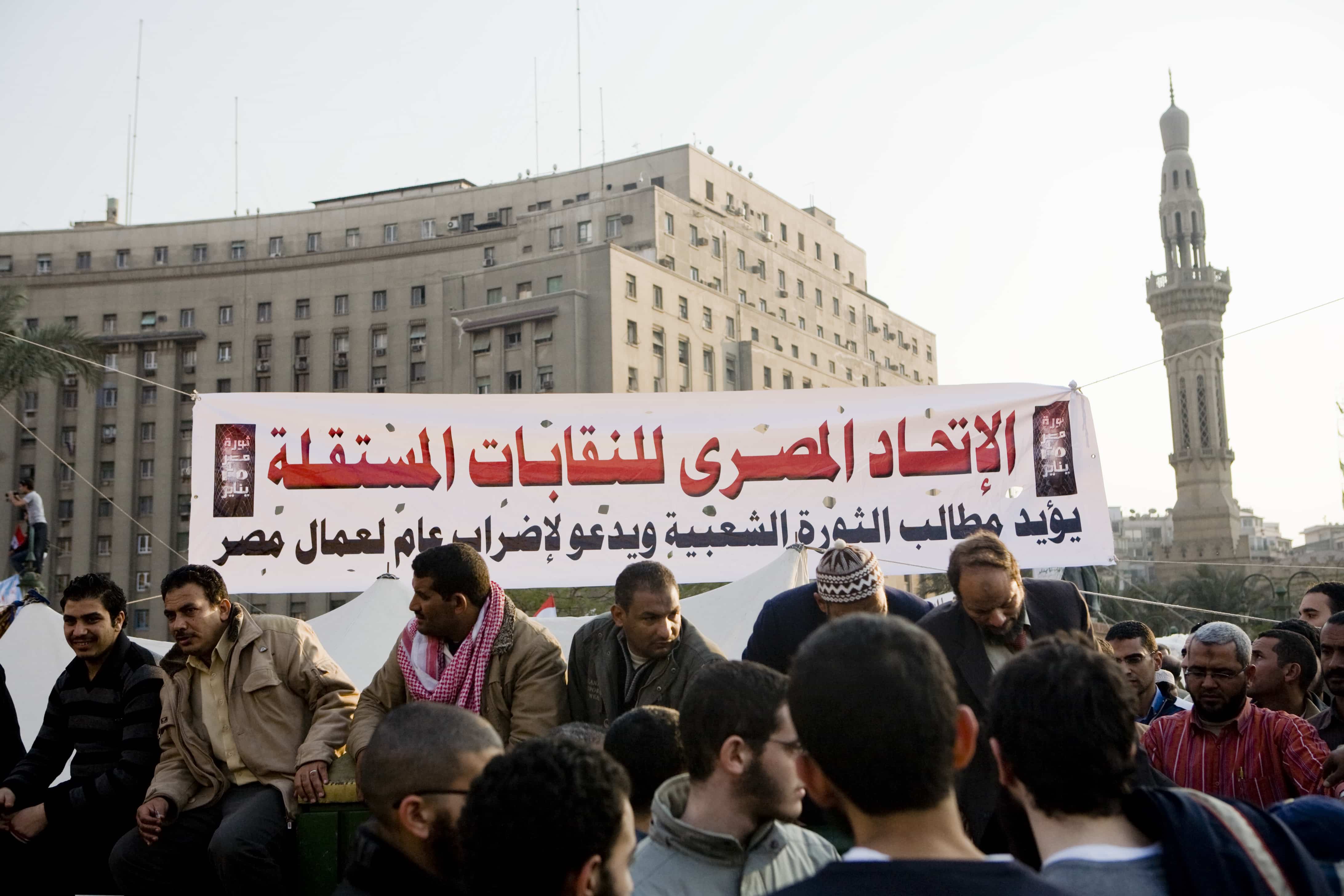 “The Egyptian Federation of Independent Trade Unions supports the demands of the people’s revolution and calls for a general strike of Egyptian workers,” reads a banner in Tahrir Square.   Photo by Hossam el-Hamalawy.

Hossam el-Hamalawy is an Egyptian socialist, journalist, and photographer.  Visit his blog: <www.arabawy.org>.  Follow Hossam el-Hamalawy at <twitter.com/3arabawy>.  This note was first published in his blog on 12 February 2011 under a Creative Commons license.