“[T]he aim of aid is to ‘corrupt’ the governing classes.  Apart from the financial appropriations (which, alas, are well known and for which we are led to believe that the donors are in no way responsible), aid has become ‘indispensable’ as it is an important source of financing budgets and fulfils a political function. . . .  Hence it is important that it is not reserved exclusively and wholly for the classes in power, for the ‘government.’  It must also give stakes to ‘oppositions’ that are capable of succeeding them.  The so-called civil society and certain non-governmental organizations (NGOs) have a role to play here.” — Samir Amin

“Yes, the Americans are trying to ride the wave.  They are trying to take advantage of this revolution.  They are trying to curb and absorb this revolution. . . .  This is the most serious danger, the greatest danger which our peoples in revolt, out resistance movements, must be aware of and be vigilant against. . . .  That does not mean that the US administration has plotted or is working to overthrow the regime which serves it.  However, it has been preparing itself for what could happen. . . .  It is trying to present itself in a different way — as defender of people and their choices — and trying to guarantee the kind of transition of power, authority, and leadership that would preserve all its relations and alliance, the American project and interests.” — Hassan Nasrallah 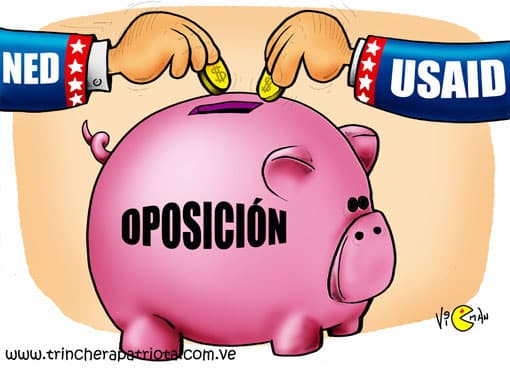 Victor Nieto is a cartoonist in Venezuela.  His cartoons frequently appear in Aporrea and Rebelión.  Cf. “In the aftermath of the US’s ‘democratic’ intervention in the Philippines there has been a vigorous debate about the significance of the US’s role in the process.  Yet as Robinson points out, ‘whether or not US intervention was itself the determining factor in the overthrow of Marcos obscured a much more significant issue: US intervention was decisive in shaping the contours of the anti-Marcos movement and in establishing the terms and conditions under which Philippine social and political struggles would unfold in the post-Marcos period‘” (Michael Barker, “A Warning for Egyptian Revolutionaries: Courtesy of People Power in the Philippines,” MRZine, 2011); “Affiliating themselves with the American organizations may have tainted leaders within their own groups.  According to one diplomatic cable, leaders of the April 6 Youth Movement in Egypt told the American Embassy in 2009 that some members of the group had accused Ahmed Maher, a leader of the January uprising, and other leaders of ‘treason’ in a mock trial related to their association with Freedom House, which more militant members of the movement described as a ‘Zionist organization.’  A prominent blogger, according to a cable, threatened to post the information about the movement leaders’ links to Freedom House on his blog.  There is no evidence that this ever happened, and a later cable shows that the group ousted the members who were complaining about Mr. Maher and other leaders” (Ron Nixon, “U.S. Groups Helped Nurture Arab Uprisings,” New York Times, 14 April 2011).