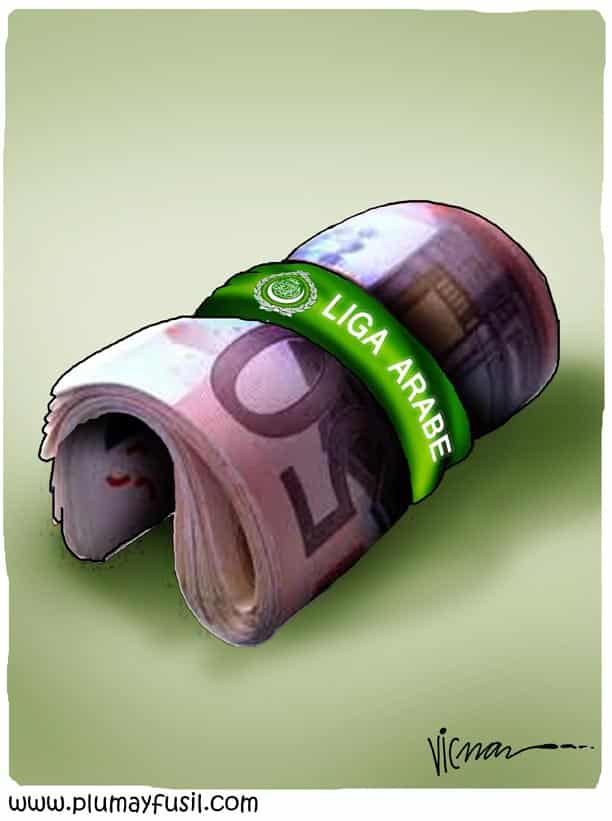 Victor Nieto is a cartoonist in Venezuela.  Cf. “Given the impossibility of obtaining UN approval for an attack on Syria or Iran, it’s clear as the Qatar sky what’s going on.  Arm and finance a group of revolutionaries and get them to start an uprising.  When the state cracks down, get the opposition to call for western intervention.  If the UN won’t authorise it, the corrupt dictators in the neighbourhood will do for a fig leaf” (George Galloway, 14 November 2011); “It is no longer enough, today, to condemn and reject foreign intervention in vague terms, or as an opening or closing line in a political statement.  For foreign intervention now has names and addresses that are clearly visible, audible, and legible too.  They include the US, the European Union, Turkey, the Gulf Cooperation Council, and all the Arab capitals that endorse this crime.  They also include the March 14 crew, with their Lebanese, Palestinian, and Syrian branches.  The Syrian National Council is among them, and all its factions and figureheads.  They also include a sizable portion of Syrian dissidents who believe that foreign intervention remains preferable to the present regime.  This places a heavy responsibility on the minority of prominent opposition figures who could never accept such intervention.  They must make their position heard, and make clear that it is categorical” (Ibrahim al-Amin, “The Great War of Intervention,” Al-Akhbar English, 15 November 2011).