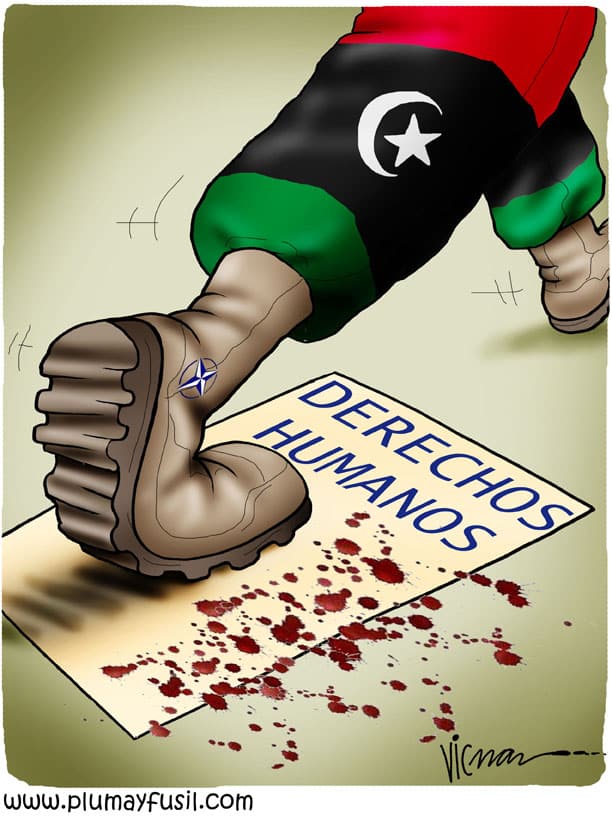 Victor Nieto is a cartoonist in Venezuela.  Cf. “A Libyan diplomat who served as ambassador to France for Muammar Gaddafi died from torture within a day of being detained by a militia from Zintan, Human Rights Watch said in a statement on Friday. . . .  On January 26, humanitarian group Medecins Sans Frontieres said it had stopped its work in detention centers in the city of Misrata because its medical staff were being asked to patch up detainees mid-way through torture sessions so they could go back for more abuse” (Oliver Holmes, “Libyan Diplomat Dies After Torture: Rights Group,” Reuters, 3 February 2012); Anthony Shadid, “Libya Struggles to Curb Militias as Chaos Grows” (New York Times, 8 February 2012); “When Gaddafi referred to the opposition as ‘scum,’ his diagnosis was perhaps a little too generous?  ( bit.ly/xFOkK4 ) #Libya” (Maximilian Forte, 18 February 2012); “Many fear at least some of the militias that fended off Gaddafi have devolved into marauding armed gangs or, worse, death squads using files recovered at offices and tips gleaned from abusive interrogations to hunt down suspected former regime figures” (Borzou Daragahi, “Misurata Embraces Normality But Traumas Linger,” Financial Times, 19 February 2012).