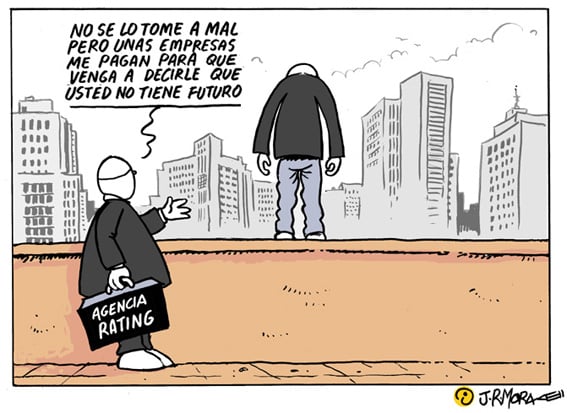 Rating Agency: “Don’t take it wrong, but some companies are paying me to come here to tell you that you have no future.”

Juan Ramón Mora is a cartoonist in Barcelona.  This cartoon was first published in his blog on 14 July 2011 under a Creative Commons license.  Translation by Yoshie Furuhashi (@yoshiefuruhashi | yoshie.furuhashi [at] gmail.com).  Cf. “In seeking to placate credit rating agencies (the very agencies whose triple-A ratings of bank-generated toxic debt drove the financial sector into insolvency), the governments of the eurozone are undermining Europe’s credibility with electorates, markets, and, ironically, the credit rating agencies themselves, which no longer believe that the European Union (EU) can resolve its sovereign debt crisis” (Yanis Varoufakis and Stuart Holland, “A Modest Proposal for Overcoming the Euro Crisis,” Levy Economics Institute Policy Note 2011/3, May 2011); Paul Krugman, “Euroblather” (The Conscience of a Liberal, 21 July 2011).