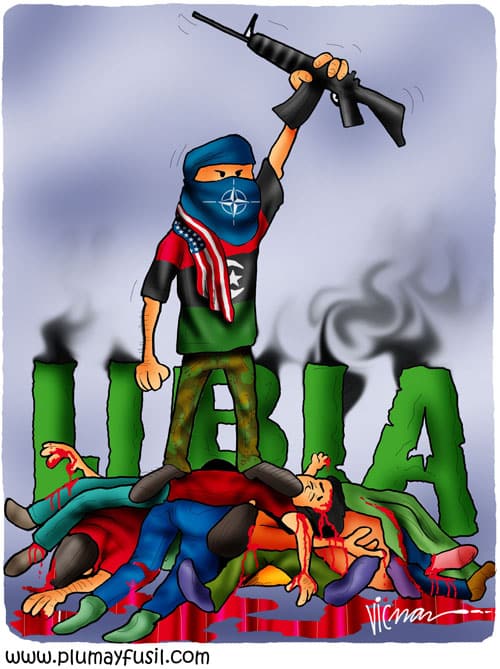 Victor Nieto is a cartoonist in Venezuela.  His cartoons frequently appear in Aporrea and Rebelión among other sites.  Cf. “Speaking from outside Britain, a senior official told me that — after the fall of the Qaddafi regime — NATO air patrols and a no-fly zone would certainly have to remain in place as a deterrent to fighting between different factions or tribes, and to fulfil NATO’s mandate from the United Nations to protect civilians.  How long might that last?  Well, he said, the current plan is for elections within 240 days, so perhaps until then at least: ‘We need an open-ended, low-intensity no-fly zone'” (“Once It’s Over in Libya, Will It Be Over?” The Economist, 23 August 2011); “Hundreds of British soldiers could be sent to Libya to serve as peacekeepers if the country descends into chaos, Downing Street indicated last night.  Number 10 repeatedly refused to rule out deploying ground troops to the war zone to prevent anarchy after Colonel Gaddafi is toppled.  A spokesman insisted a deployment remained ‘unlikely’ at this stage — but the development will fuel fears of ‘mission creep’ and that Britain will slowly be sucked into a long campaign.  Two hundred troops are on standby to fly to the North African state at 24 hours’ notice if needed” (Jason Groves, Ian Drury, and Nick Fagge, “British Troops May Act as Peacekeepers If Libya Descends into Chaos,” Daily Mail, 23 August 2011); “Yet to believe that NATO would win the war and let the ‘rebels’ control power is a joke.  Reuters has already reported that a ‘bridging force’ of around 1,000 soldiers from Qatar, the Emirates and Jordan will arrive in Tripoli to act as police.  And the Pentagon is already spinning that the US military will be on the ground to ‘help to secure the weapons'” (Pepe Escobar, “Welcome to Libya’s ‘Democracy’,” Asia Times, 24 August 2011).