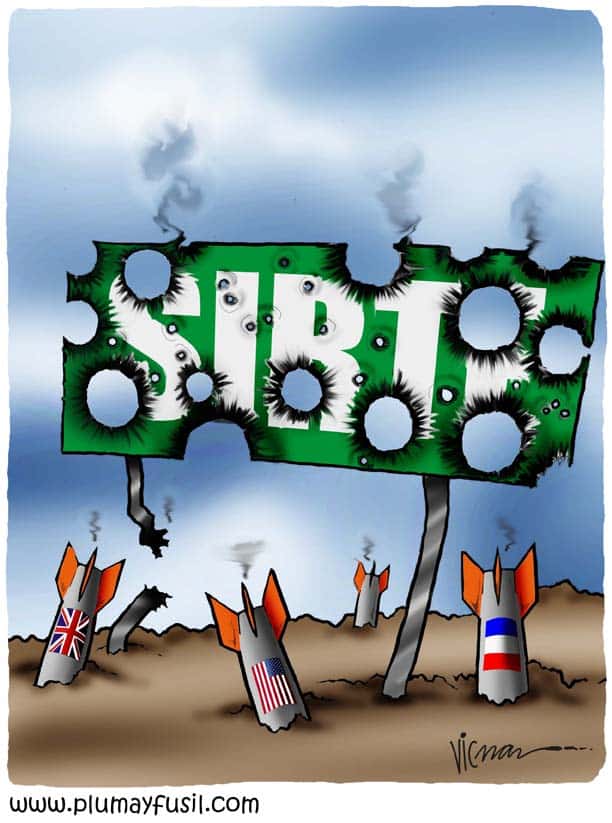 Victor Nieto is a cartoonist in Venezuela.  Cf. Tom Coghlan, “Sirte Civilians Accuse NATO of Genocide” (The Australian, 27 September 2011); “Libyan Children Killed by Rocket As They Rush to Leave Sirte” (AFP, 2 October 2011); Hadeel Al-Shalchi, “Fleeing Gadhafi Bastion, Bitter at the New Libya” (Associated Press, 4 October 2011); Rania El Gamal, “Sirte Residents Turn Anger on Libya’s New Rulers” (Reuters, 5 October 2011); “The hospital in Sirte has been repeatedly hit during NATO and NTC forces bombardment, the International Red Cross informed the Catholic Missionary Agency, Misna” (“Sirte Hospital Hit by NATO and NTC Bombardments,” AGI, 6 October 2011); “In Libya, anti-government fighters are facing fierce resistance in Moammar Gadhafi’s hometown of Sirte.  It’s one of the last areas that has not fallen to rebel forces.  But it’s hardly the last bastion of support for the deposed leader.  On a busy afternoon in the market in the southern Tripoli neighborhood of Abu Salim, it doesn’t take long for a man to approach a visiting reporter and say under his breath, ‘You know, we all support Gadhafi here'” (Lourdes Garcia-Navarro, “Gadhafi May Be Hard To Find, But Not His Supporters,” NPR, 6 October 2011).

Right Here All Over (Occupy Wall St.)
Occupy Wall Street: Search Party for a New Equality in What We Have, What We Do