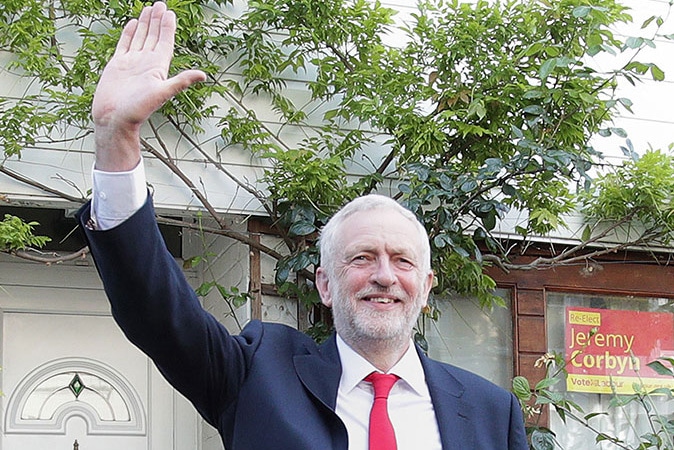 It doesn’t matter where you begin.

Canterbury, Tory since the First World War, went Labour. Labour took over Portsmouth South, a Tory–Liberal marginal. Nick Clegg lost Sheffield Hallam, the Tory ministers Jane Ellison and Ben Gummer were ousted, and Amber Rudd was only barely saved by the recount. A string of bellwethers, such as Warwick and Leamington, Reading East, Ipswich, Peterborough and Enfield Southgate, turned Labour. Mountainous SNP majorities fell. Supposed London marginals such as Ealing Central, Tooting and Hampstead and Kilburn became safe seats. Labour had its biggest surge in vote share since 1945, with Corbyn racking up just short of 13 million votes, 40 per cent of the total, after coming from twenty points behind. The political map has been completely re-drawn.

Just as important was the dog that didn’t bark. The “UKIP effect” was, for good reasons, expected to maul Labour in the rustbelts of the North and West Midlands. Not a bit of it. Except for a few interesting cases, such as Stoke and Mansfield, Labour came back with increased majorities.

It is hard to remember, in the face of all this, that Labour didn’t actually win the election. Because, while Jeremy Corbyn didn’t become Prime Minister, he did pull off the most stunning upset in recent political history. And he did this by turning out voters who, according to all received wisdom, would never vote, above all the young and poor.

The campaign had many surprising echoes of 1997. Corbyn, for example, has cheerfully appropriated the New Labour slogan of “the many not the few” and given it a far more radical inflection. He spoke the language of opportunity and aspiration, but he gave it a collectivist rather than individualist content. Corbyn is sometimes accused of populism. The appropriate term is class politics. Labour ran an unashamed class-driven campaign. It promised to tax the rich, and the large corporations, to pay for council house building, nationalized utilities and rail, and free education. It promised to abolish zero hours contracts, raise the minimum wage, abolish the anti-union laws, and end benefit sanctions and the bedroom tax. There was a promise to review council tax and look at implementing a far more progressive Land Value Tax. It also incorporated the usual gamut of left-wing “post-materialist” themes, including ambitious targets for reducing pollution, and making free wifi available across the rail network. The media response was somewhere between condescension – long on passion, short on details, claimed the BBC’s Nick Robinson – and panic, as the right-wing press decried a looming garden tax. But it was, unmistakably, widely popular and the clear turning point in the campaign. The elderly UKIP voters who switched to Labour, and the young who turned out, would not have come out for anything less.

Class cut across generations, but it also cut across nations. Britain is a multinational state in crisis. The SNP and UKIP have been two very different faces of this crisis, but both have just experienced major setbacks. It was assumed that Labour could only win in this situation by becoming a wan imitation of UKIP. But this wouldn’t have worked. Flag-waving is patronizing, unconvincing and off-putting to the voters Labour needs. Campaigning from the Left, on the other hand, reminds people of what they like about Labour.

But the generational change is also real. In a perverse way, the attacks on Corbyn allowed him to score unexpected wins on this front. Attacking Corbyn’s supposed IRA “links” is a classic Lynton Crosby strategy, but twenty years after Good Friday, it only excited a layer of older right-wing men. Corbyn’s insistent even-handedness in condemning all the violence, and his early advocacy for republican prisoners and willingness to meet Sinn Féin, look forward-thinking. His critique of the “war on terror” articulated what has become a common sense, especially for those who grew up in the years of Stop the War. This helped him defeat May on what was supposed to be her turf.

Of course, Labour was helped by a hopeless Tory campaign. May lost a lot of her presumed regal authority by running away from debates, ducking questions and U-turning. But May had been exposed from the Left. Her rightist version of class rhetoric, her patronizing appeal to “ordinary working class families”, might have worked had Labour not offered a far more hopeful agenda. Likewise, had Labour tried to tail the Tories on terrorism, as it would traditionally have done, May would have controlled the narrative. Corbyn’s backbench critics won’t like it; neither will the increasingly irrelevant tabloids, nor the Crosbyite spin machine. But the biggest way in which the political map was re-drawn is that the horizons of possibility were radically expanded. We used to hear there was no alternative. Now the alternative is clear.