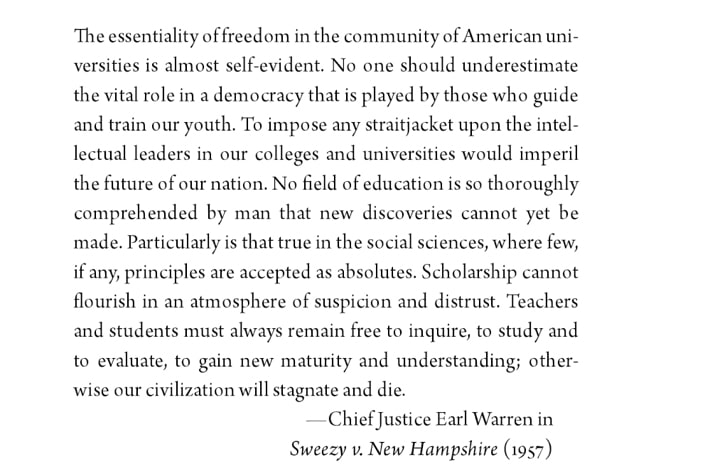 This article from The Higher Edition blog commemorates Sweezy v. New Hampshire at 60 years—the first supreme court ruling in support of academic freedom. However, the author makes some intriguing observations about the concurring opinion in Sweezy (by Justice Frankfurter), which established what are known as the “‘four essential freedoms’ that should be outside the reach of government, i.e., ‘to determine on academic grounds who may teach, what may be taught, how it shall be taught, and who may be admitted to study.'” The author argues that this part of the opinion can be exploited by “universities-as-corporations or universities-as-individuals…to start asserting their autonomy as a form of academic freedom.” Given the fact that “administrations have taken steps to expand their supervisory role into areas previously reserved for faculty jurisdiction, from curriculum planning to oversight of the accreditation process,” this is indeed a worrying prospect. —Eds.

I did not know that Albert Einstein was a socialist. Maybe I had known once, or more likely, never cared. But in 1949, when the great physicist and Nobel laureate declared his beliefs, in the innocuously titled “Why Socialism?,” a lot of people would have cared. Indeed, by 1953, Joseph McCarthy was after him, and people were sending hate mail to the Institute for Advanced Study asking that Einstein, a founding member of the research center, be sent packing.

The impetus for the attacks had nothing to do with Einstein’s essay—which few would have seen—but with his high-profile defense of a Brooklyn high school teacher named William Frauenglass, who found himself before a Senate subcommittee to answer questions about his loyalties and associations. At some point, Frauenglass reached out to Einstein for advice, which he gave in a generously worded letter that ended up in the Times, accusing “reactionary politicians” of trying to “suppress the freedom of teaching and to deprive of their positions all those who do not prove submissive, i.e., starve them.” In the final years of his life, Einstein’s would have been the most famous face associated with the idea of academic freedom in America.

I would not have known Paul Sweezy’s face from William Frauenglass’s. Sweezy was the co-founder, with Leo Huberman, of Monthly Review, an openly Marxist periodical that has remained in circulation since 1949. I wouldn’t say that Einstein could have published “Why Socialism?” just about anywhere, but it was a nice gesture that he chose to let an obscure, left-of-left forum have it for their premier issue. At the same time, just about anyone in academia but Einstein and his colleagues at the IAS would have risked academic homelessness or worse for being, or appearing to be, a “subversive person,” as Sweezy was by the attorney general of the state of New Hampshire in 1954.  In fact, by the time he came to the attention of state authorities, Paul Sweezy had been academically homeless for many years: his last sure gig was in the economics department at Harvard, from which he had moved on in 1946 when it was clear he would never get tenure. Since then, aside from his duties at Monthly Review, he had been a journeyman lecturer at places like the University of New Hampshire, where somebody obviously didn’t like what they heard.

Sweezy v. New Hampshire, 354 U.S. 234 (1957), which was decided sixty years ago this week, is justly celebrated for being the first academic freedom case to reach the Supreme Court, and in which the majority opinion actually sided with the petitioner. At the time, this may not have appeared to be the start of something: virtually the same group of justices upheld the conviction of University of Michigan fellow Lloyd Barenblatt for failing to cooperate with HUAC in Barenblatt v. U.S. (1959), and Keyishian v. Board of Regents (1967) was ten years away. But we remember Sweezy because of Earl Warren’s observation in the majority opinion that oblivion awaited civilization if the time ever came that teachers and students were no longer “free to inquire, to study and to evaluate, to gain new maturity and understanding.”

Perhaps less celebrated today but hardly a footnote, Felix Frankfurter’s concurring opinion in the case has intrigued scholars over the decades. Frankfurter cited South Africa’s open universities, then under threat of segregation by the pro-apartheid Strijdom government, as an example of higher education institutions that had resisted external intervention in their internal affairs. Universities, South African faculty and administrators (and now Frankfurter) argued, enjoy “four essential freedoms” that should be outside the reach of government, i.e., “to determine on academic grounds who may teach, what may be taught, how it shall be taught, and who may be admitted to study.”

What was always intriguing about the Four Freedoms argument was how, in one stroke, Frankfurter had simultaneously codified and complicated the meaning of academic freedom as a concept, by suggesting that in addition to the academic freedom of individual academics, there is an “institutional” academic freedom that accrues to universities as corporations. The idea should be immediately recognizable to higher ed wonks as an update of Dartmouth College v. Woodward (1817), and for the most part, it remains a legal curiosity. My shepardizing powers are limited, but everyone seems to agree that the Four Freedoms, in spirit or in name, did not resurface in court decisions until Regents of the University of California v. Bakke (1978), when Justice Lewis Powell, writing for the majority, quoted Frankfurter as grounds for upholding the right of a university to apply its affirmative action policy in admissions. Walter Metzger observed that, at some point in the 1980s, there was a new openness to the notion that universities should be given their anthropomorphic heads to decide whom to admit (or not), whom to hire (or fire), and so on, adding that the cases under review had the distinction of not involving “individual expressive freedom,” e.g., Regents of the University of Michigan v. Ewing (1985).

How relevant is Sweezy v. New Hampshire in today’s higher education landscape? It is generally agreed that with Sweezy, the Court established academic freedom as a function of the First Amendment, as it would do even more unambiguously in Keyishian. The irony, as David Rabban has pointed out, is that the Court in reality did no such thing, at least not in the sense of showing it immortally articulated by the Constitution as, say, freedom of the press is; a professor who speaks “irresponsibly” within her field of expertise might not be protected, any more than an attorney or a physician would be for violating the standards of their professions. It could be argued that the Four Freedoms argument hardly enshrined the right of universities to abuse their right to hire and fire, either. The only recent court challenge I am aware of that could have struck a blow for institutional academic freedom never reached the Supreme Court: Demers v. Austin (2014), decided in the Ninth Circuit in favor of a Washington State University professor of journalism no less, cited Sweezy-Warren, not Sweezy-Frankfurter. (According to the AAUP, David Demers had sued WSU for retaliating against him for speaking and writing critically about the practices and policies of his department.)

What bugs me about Demers v. Austin is that the plaintiff was tenured faculty, an increasingly moot line of defense (including, as it happens, for Demers himself), given the rise in academic professionals without it: this spring alone, Inside Higher Ed reported on the firing of one adjunct at Community College of Aurora for refusing to “dumb down” his introductory philosophy class and of another, veteran adjunct (if that’s the term) at Barnard, for her union activism. But it is becoming clear that tenure is no guarantee of anything, either, from last year’s “drowned bunnies” affair at Mount St. Mary’s to the mass firings at Wayne State in March. The St. Mary’s controversy was simply bizarre—faculty were accused of institutional “disloyalty” for leaking the president’s dark humored remarks to the student paper—but the example of Wayne State, I think, begs the fascinating question of how the expectation of scholarly “productivity” can be squared with the First Amendment.

Higher education institutions have been criticized for administrative bloat for so long that it’s obvious nothing is going to change, but as Benjamin Ginsberg revealed in The Fall of the Faculty (2011), administrations have taken steps to expand their supervisory role into areas previously reserved for faculty jurisdiction, from curriculum planning to oversight of the accreditation process. Not even presidents are safe: one in four member HEIs [higher education institutions] with the American Association of State Colleges has experienced turnover in leadership that can only be described as premature, and one board insider observed to Inside Higher Ed that trustees have simply become smarter about dispatching executives who don’t perform with the efficiency of CEOs from the private sector (which, in fact, many trustees are or have been). We wonks know that governing boards are the legal owners of the institutions that they govern. It’s also worth remembering that the AAUP’s ten-page 1915 Declaration of Principles on Academic Freedom and Academic Tenure contains (by my count) no fewer than twenty references to governing boards, trustees, or the equivalent, likening the relationship of the faculty to trustees as “that between judges of the federal courts and the executive who appoints them.”

The larger point is, that if universities-as-corporations or universities-as-individuals wanted to start asserting their autonomy as a form of academic freedom, they could do worse than to look back at Sweezy. Who is the ultimate authority to say what a university is for and, in effect, how it should go about doing that? If (to use Ginsberg’s terminology) universities are no longer “subversive institutions” but “knowledge factories,” couldn’t it be argued that voices and variables unrelated to the production function are admitted into the mix at the discretion of the administration?

Short answer: The future of academic freedom is in the hands of donors, not the courts.