Imagine finding, at one table, the worst killer crooks you ever heard of: Jack the Ripper, Al Capone, Bonnie and Clyde, the Serial Killer, maybe the pirate Blackbeard, surely a cold-blooded terrorist or two. The very worst! No matter what bootleg Scotch, yo-ho-ho rum or speakeasy gin they’d offer, Mr. Normal Citizen would want to get out – fast!

Lower the curtain, change the scene. The atmosphere in the government building in Berlin on August 2nd is fully different, not a bit of similarity. Those present, most in tailored apparel, sit in soft leather chairs and sip aromatic drinks from fine glassware. Who are they? Germany’s power people!

Their subject matter, not nearly so pleasant as the furnishings, was set in motion by Volkswagen, or rather the innards of its diesel motored vehicles. It was vital enough; not only is VW the world’s biggest auto producer, this industry is most powerful in a country whose economic success depends on its reputation; strong, efficient German products, always safe and respectable! Like the furnishings and those meeting in this safe and respectable meeting room. 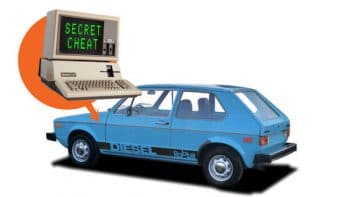 What had occurred? As the Financial Times of London reported: “Up to 11 million vehicles worldwide were fitted with the ‘defeat devices’ to reduce nitrogen oxide emissions – only when they were tested.” (January 11 2017) It has since turned out that VW was not alone in this planful cheating. So were its rivals, Daimler-Benz (Mercedes) and BMW as well as some suppliers.

But who can distrust such illustrious names? How many dreams they recall, fulfilled or unfulfilled! Happily mated since 1926, Daimler and Benz have always appealed to aristocratic tastes with their beautiful Mercedes. Other wealthy customers preferred distinctive BMW cars. In terms of quantity, Volkswagen autos sold best but, depending on the size of wallets or portfolios, many turned to other brands in the Volkswagen stable – the elegant Porsche, long connected by marriage and money, or to Audi, SEAT, Škoda, Bentley, Bugatti, Lamborghini or Ducati, all acquired branches of the VW empire.

Only a few like me, blessed with long lives but burdened with long memories, have few gleaming dreams but rather bitter recollections on hearing those names. I know, for example, about the major owners of BMW, the Quandt family. Like daughter Susanne Klatten, with a fortune of $22.5 billion the richest person in Germany and probably, after Angela Merkel, the most influential. Her yoiuiunger brother Stephan Quandt has only about $20 billion. Father Quandt, a major sponsor of the Nazi movement, provided the Wehrmacht with a substantial share of its weapons, making his fortune with thousands of concentration camp slaves, many so starved they ate material used to fill the batteries for military vehicles. Ms. Quandt herself is guilty of no such crimes, and can probably drive a car and a very good bargain but not a lathe or machine drill. But her pressure against cuts in air poisoning has been considerable, and so have been her company’s contributions to political parties deciding on such issues.

Nor can I forget that during the Nazi era Daimler-Benz was owned by Friedrich Flick, a major financial backer of Hitler and a major profiteer of his war, when 40,000-60,000 hungry slave laborers contributed to his immense wealth, over 10,000 with their lives. Mildly sentenced after 1945 but pardoned in 1950, he became the richest, most powerful industrialist of them all. His son and heir was not known for any better morals; in the giant “Flick Affair” in 1983 it was found that the family had cheated the nation of almost a billion in taxes and bribed every key minister or politician to cover it up. Daimler-Benz, always close to the top, indicated its moral improvement by defying the UN boycott and selling military vehicles to the apartheid government in South Africa.

Volkswagen was born with a scandal; founded by Hitler to provide German workers with a car – the “beetle” – it collected their money every month in advance but then switched to weapon-making before it had delivered one of them. Only after sixteen years of post-war litigation did the cheated – and surviving- workers get a small rebate for the lost money. VW also made a giant fortune by using 40,000 war prisoners, kidnapped workers from conquered areas and concentration camp prisoners.

But those crimes all belong to the past; their perpetrators are long gone, replaced by new men.

And their morals? Month for month more facts came out, VW was forced to retreat step for step, already agreeing to pay huge damages in the USA for its trick use of equipment which showed the permissible and advertised level of emissions during inspection, but switched to high gear air poisoning as soon as it rolled away. Then it was discovered that this was the practice in nearly all diesel-fueled vehicles in Europe, not only VW and Porsche but their competitors Daimler-Benz and BMW in the same way. And then it was found that they were all in it together, not only with nitrogen oxides but in general planning and pricing, agreed upon in strictly forbidden cartel meetings and agreements – known familiarly as cahoots!

Things still moved slowly. Then a lower court judge in Stuttgart ruled that Diesel vehicles which did not conform with legal emission limits could be barred from inner cities; health came first. This was earnest; if Stuttgart could do it, might not Munich, Hamburg or Berlin? Who would then buy banned vehicles?

Something had to be done, so the “Diesel Forum” was called, with the Transportation Minister, the Environment Minister, the big corporations companies involved, the heads of some German states, a few organizational representatives but none of those hit by asthma, cancer or other victims.

But this was at best a sticky field. How tough could they get? The minister president of Bavaria, a major player in the Christian party union with Angela Merkel, is hardly unaware of the huge BMW corporation in his state. The head of Baden-Wurttemberg is a Green (the only one in such a job) and his party should be especially alarmed about emissions. But his presidential palace is within yodeling distance of the main factories of both Daimler-Benz (with Mercedes) and Porsche, the main props of his economy (and he conspicuously uses a state Mercedes!). As for VW itself, 20% of it is owned by the state of Lower Saxony, whose government has thus far been in the hands of the Social Democrats (with a few Greens). How stern can they all get? Elections, due in eight weeks, are always expensive!

The Environment Minister can be a bit difficult, but not the more important Transportation Minister, Alexander Dobrindt, a far-right politician from Bavaria who has made a name for himself in three matters; his sharp opposition to same-sex marriage, even sharper opposition to the LINKE (Left) Party, which he thinks must be carefully watched, or better yet, forbidden, and his listing by Greenpeace as one of 33 auto industry lobbyists. A few years ago he held his protective hand over illegal carbide dioxide emissions; now it’s nitrogen oxide from Diesels.

At issue at the forum was how best to lower the poisonous emissions. Making necessary changes to about 5 million vehicles’ hardware would be extremely expensive, up to 1500 euro apiece, a heavy charge. Changing only the software at 100 euros per vehicle would be far, far preferable! It would not nearly bring poison levels down to safe levels, but would cut less of the 10 and more million annual incomes of the carmakers – a small price for years of purposely, secretly deceiving testers, purchasers, laws, society and above all human beings, especially children, who as a result die earlier, not by walking the plank or falling in a hail of bullets, but in debilitating illness and earlier death.

Some people protested, lowering a big banner from the roof of the Transportation Ministry, with a pun on the Nitrogen oxide formula, calling it “Fort NOx”. The unamused response was to move the forum to the less accessible Interior Ministry. Need one inquire which decision was reached? After all, money does not grow on trees – nor much else either if such people continue to have their way. The obvious escape was labeled “a compromise!”

Was my opening comparison with notorious bad-man killers too harsh? Perhaps. After all, as Shakespeare’s Anthony once said about the killers of Julius Caesar: “So are they all, all honorable men!”