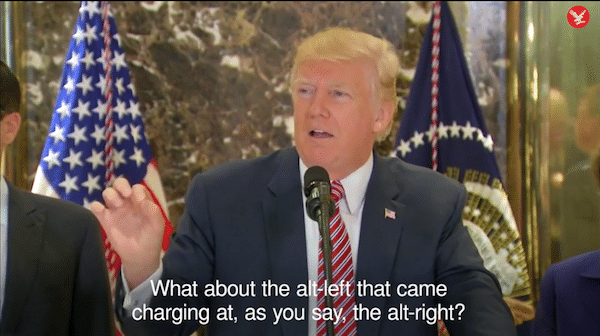 Trump trying to go after alt-left

President Donald Trump sparked outrage Tuesday afternoon after he equated Nazis and counter-protesters in Charlottesville. To do so, he referred to the anti-racist activists as the “alt-left,” with the implication that they were the equivalent of the “alt-right,” two sides to the same coin, showing there was, in his words, evil “on both sides.”

It’s important to remember that the “alt-left” rhetorical gambit—deliberately equating leftists with the alt-right, itself a euphemism for internet-savvy racism—was popularized by centrist pundits and Democratic Party apparatchiks in an attempt to stigmatize and smear those challenging the center-left establishment. As it turns out, there’s no way to suggest that unruly leftists are as bad as neo-Nazis without suggesting that neo-Nazis are no worse than unruly leftists.

All these pundits and writers presumably thought equating leftists with Nazis (the logical implication of the “alt” prefix) was an easy way to score points and position themselves on the Reasonable Liberal Left. What they did instead was provide fodder for anyone on the right, looking to trivialize the threat of an emerging neo-Nazism, to “both sides” the problem out of existence.

There are hundreds of ways to criticize the left that don’t involve likening them to Nazis, but these weren’t the ones settled on by establishment-defending flacks in urgent need of a smear against left critics, especially after the disastrous 2016 election. The reliance on Nazifying Sanders backers, socialists, anti-fascists, anarchists and a whole host of anti-right, anti-centrist activists fed the toxic ideological stew that made Trump’s false equivalency not only possible, but entirely banal.

The extent to which horseshoe-theory pablum is drilled into people’s heads, by everything from public schools to pop culture, can’t be overstated. Even everyday political terms—from “moderate” to “extremism,” from “radicals” to “the center”—are highly normative labels, tossed around without much thought. What constitutes extremism is just as ideologically worthless. As FAIR (4/20/17) noted after Bret Stephens’ hiring by the New York Times, anti-Arab racism, climate denial, rape apologia and non-stop warmongering are not considered outside the “mainstream”—but single-payer healthcare is.

Managing the Overton window and setting the limits of debate, as media critics have noted for decades, is the corporate media’s primary function. This goes a long way toward explaining why nominal media liberals, charged with opposing Trump and the emerging far right, would prioritize demonizing the left—even if doing so helped pave the way for Trump’s neo-Nazi whitewashing.