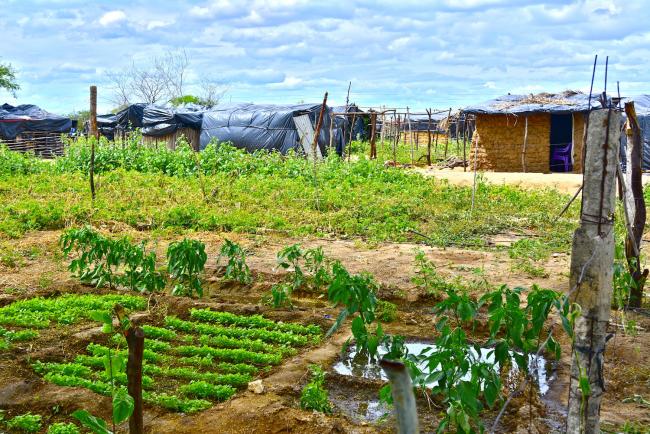 An occupation Camp in Filhos da Luta, Pernambuco in 2014. (Photo by Mel Gurr)

Brazil’s Landless Rural Workers’ Movement, MST, is widely known as Latin America’s largest organized rural social movement, claiming a membership of 1.5 million people in 24 of 26 states in Brazil. Since its formalization in 1984, the movement has become an international symbol of grassroots resistance to neoliberalism as its members—  made up of squatters, sharecroppers, and the landless poor— struggle for land redistribution and social transformation in one of the world’s most unequal societies. Utilizing the tactic of direct land occupation, the MST has helped to redistribute land to an estimated 300,000 families through thousands of agrarian reform settlements across Brazil.

In opposition to Brazil’s predominant model of agribusiness, based on the export-oriented mechanized production of commodities like soy, sugarcane, and eucalyptus, MST communities have provided the rural poor with a sustainable alternative to the urban exodus—providing employment, contributing to food security, and conserving cultural and biological diversity. At the same time, the MST has become famous for its actions related to education, health, culture, agroecology, and cooperative production. With the support of a number of government administrations, its holistic approach to sustainable rural development has helped to extend tangible benefits of belonging to traditionally neglected communities and territories in the Brazilian countryside. In some communities, according to government reports, settlers have reported dramatic improvements to their quality of life and future prospects.

However, the situation confronting smallholder farmers affiliated with the MST has faced numerous challenges in recent years– from declining rates of land expropriation and investment to infrastructural challenges and increased rates of violence in rural communities. This spring, over just two months, 18 rural workers were murdered in the northern Amazonian state of Pará by military police and hired gunmen. Meanwhile, available credit for small-scale land holders affiliated with the MST has declined, and the Brazilian Congress has passed revisions to land regularization, which alters eighteen laws, including within the Brazilian Constitution itself, to move towards dismantling the universal right to land and housing. An even more chilling example of disturbing dynamics at play in Brasília is a proposal to reintroduce conditions of servitude in the countryside— allowing workers to be paid in food and housing instead of wages. 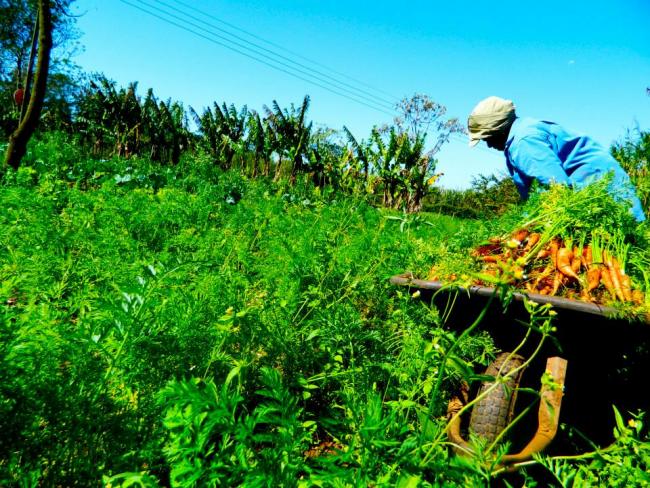 These developments must be contextualized within Brazil’s broader political and economic conjuncture, marked by a severe political crisis and economic recession. Since the dubious impeachment of Dilma Rouseff of the Workers’ Party (PT) her replacement, Michel Temer has proposed a number of austerity measures—beginning with PEC 241 (nicknamed the pacote de morte or “death package”) which caps social spending programs for the next twenty years. Such regressive measures threaten the significant progress made by previous administrations in terms of tackling hunger and extreme poverty, and represent a rupture with prior governance strategies based on participatory democracy. They have sparked massive protests throughout the country.

While Brazilians across the socioeconomic spectrum have seen their incomes contract and job prospects diminish, rural workers and family farmers have been among those most hurt by President Temer’s policies. One source of concern is divestment in the PAA (Food Acquisition Program) and PNAE (National School Food Program), which will disproportionately impact small-scale landholders. These initiatives require that municipal governments purchase a proportion of all food supplies destined for prisons, schools, and other public institutions from small-scale farmers. Such measures have reduced risk and increased income among smallholders. Despite the positive outcomes affiliated with these programs, the budgets for PAA and PNAE were cut 67% between July 2016 and July 2017. According to Antônio Rovaris, of The National Confederation of Rural Workers and Family Farmers (CONTAG), “The government is withdrawing from its social obligations and leaving the farmer to the mercy of the market.”

In addition to cuts to this program, smallholders have also begun to have less access to credit. Due to financial limitations, small-scale farmers generally struggle to obtain the capital needed to maintain their production and rely on loans. In 1994, the National Program for the Strengthening of Family Farming (PRONAF) began providing reduced-interest loans to land reform beneficiaries. But as the economic situation has worsened, Brazilian banks have been more reluctant to lend, and subsidized credit payments have been delayed. The government ministries that oversee the land reform program have been defunded, and many offices have closed.

Many small-scale farmers in MST settlements have not had access to government-sponsored technical assistance for years, as was promised to them and provided in the late 2000s. The impacts for some communities have been catastrophic— for example, in the interior of São Paulo state, in a community where roughly 50% of land reform beneficiaries had no prior agricultural experience. “This is very serious. Without technical assistance, people don’t know how to grow crops or invest their production credits,” one farmer told me last June. “People end up in debt and move off the land. This is a major problem, because for many people, the MST was the last option, the ultimate rung on the ladder, they have nothing else! This is even worse considering our problems with infrastructure.” 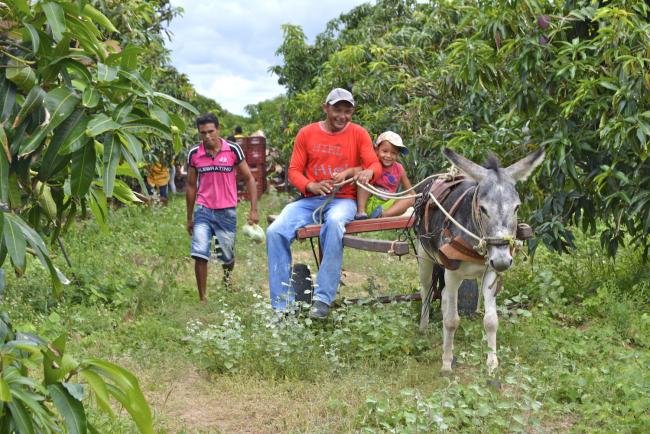 In the mango orchards in the Assentamento (Settlement) Safra in Pernambuco. (Photo by Mel Gurr)

Indeed, in this community, I observed that roughly half of the 242 settled families lacked reliable water access and were awarded the right to live and work upon lands that had been severely degraded lands from decades of sugarcane monoculture. Lacking technical assistance compounded already serious problems, contributing to a cycle of impoverishment and debt that has encouraged families to seek a living elsewhere.

Central to the current situation is the passage of the Medida Provisoria 759 (Temporary Measure 759/2016) law this May. This legislation creates profound transformations in a series of laws that manage land regularization in rural and urban areas. The Medida Provisoria follows on President Temer’s December 2016 announcement of plans to allow foreign investors to purchase land inside of Brazil for agribusiness development. These plans would permit the privatization of land reform settlements by providing individual titles to families, thereby facilitating land sale to private bidders—expected to spark a new wave of land grabbing in the Amazon. While the proposal stipulates that 10% of these lands be destined for agrarian reform, but decisions regarding distribution and beneficiaries would fall upon municipal governments. This is concerning considering the weighty influence of large-scale landholders over local politics.

According to Alan Rodrigues, an agronomist in Paraná, “The government wishes to end the MST and the occupations… This is systematically dismantling the mechanisms developed for land reform since it was included in Constitution in 1988.”

Its consequences are not limited to the countryside however, as it threatens the entire structure of usufruct rights necessary for poor city dwellers. According to Sérgio Sauer, professor of Environment and Rural Development at the University of Brasília, the measures will “result in more land concentration, exclusion, and expropriation of the population.”

Leaving 90% of land expropriation to foreign companies and 10% to the whim of municipal governments represents a total reversal of prior approaches towards land reform—which relied upon social movements in partnership with the state. This could result in the delegitimation and elimination of direct land occupation as a mechanism to demand state recognition and expropriation of socially unproductive land. This tactic, enshrined in Brazil’s 1988 Constitution, has allowed social movements such as the MST to pressure authorities to expropriate unproductive farmlands to them. In the 1990s and early 2000s, they organized land occupations and helped select potential land beneficiaries. Currently, an estimated 150,000 squatters continue to await state recognition throughout Brazil, a population estimated to grow considering widespread unemployment. These land occupiers dwell in precarious conditions and are subjected to violent evictions. The proposed reform would effectively exclude the participation of social movements and civil society groups in the redistributive political process.

For Rodrigues, future prospects for small farmers are bleak. “I am very concerned about the survival of our families in the settlements,” he said. “I like my work. I am selling cooperatively produced food and dairy in my municipality. It is very rewarding, and I love to live in the settlement, but I look around and do not see a future.” Without government support for the land settlements and the small farmers who call them home, Rodrigues will be unable to make a living. He is considering returning to college to study computer science. 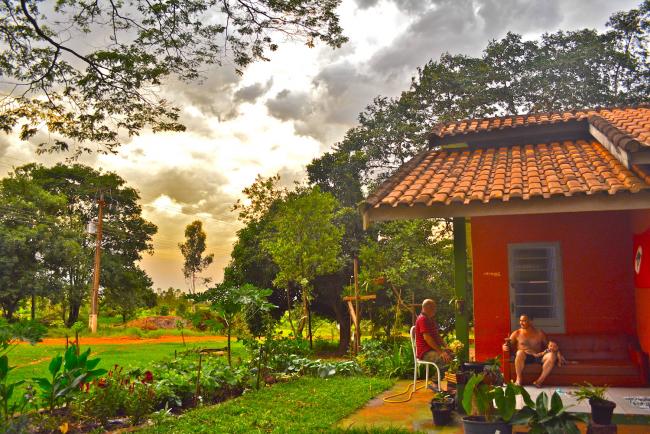 Rodrigues’s training and career development as an agronomist directly result from his family’s inclusion in the MST. Over the last thirty years, the MST (with the support of the PT) has made training the next generation of rural producers and leaders a priority. Settlement youth have received agroecological training, college scholarships, and other alternative adult education initiatives to ensure that they have the training required to run viable agricultural enterprises. Rodrigues, the son of land reform beneficiaries, who grew up in the black plastic shanties for which the MST is well known, exemplifies these generational dynamics. Because of the MST’s achievements, he was able to complete college and earn a master’s degree in agronomy. Once Rodrigues returned to the countryside, he played a key role in developing the cooperative dairy business in his community. “My parents were from the countryside. They didn’t get the opportunity to study. That is why they joined the MST [in the 1990s],” he said. “Without land, technical assistance, credit, and support—they have nothing. Land reform gave my family everything.” 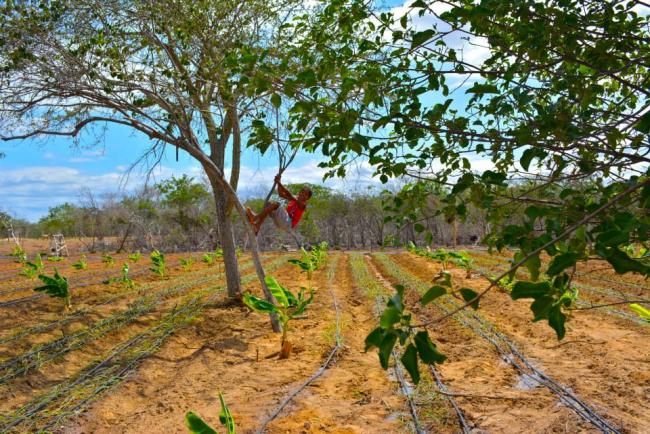 Moreover, as MST activists point out, small-scale landholders account for 75% of farming establishments and almost 80% of rural employment, and are responsible for producing approximately 70% of the food consumed by Brazilians. Rural Brazil needs youth to stay on the land and produce food so that their communities can survive. When youth turn away from the countryside and migrate to the cities, the prospects for their communities suffer. As a report from the Ministry of Agricultural Development (MDA) noted: “[T]he trajectories of youth from the countryside to the city are not good for the nation, for the countryside, or for cities, and possibly not for the youth who had to leave their communities behind… For the future of family farming, as well as for the Brazilian nation, it would be better if youth could stay and continue working in their own communities, and if there were conditions for them to marry, have families, and live with dignity. This is why rural youth have become an important problem for the government.” How can these fragile alternatives in sustainable agrarian development survive if young adults, like Alan, must turn away from it?

The implementation of austerity measures in the Brazilian countryside, then, casts a long shadow on the potential of farming and land reform to provide the next generation with a sustainable future. It threatens decades of progress made by land justice warriors.