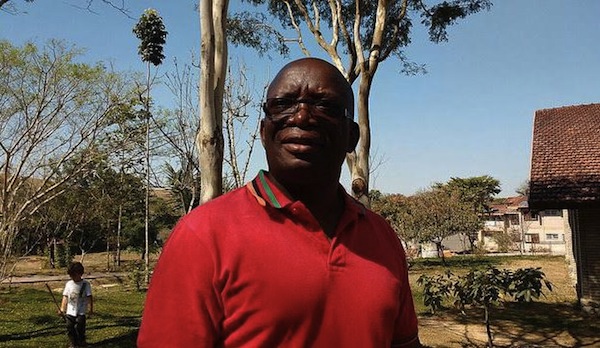 In his trip to Brazil, economist Cosmas Musumali, who is Secretary General of Zambia’s Socialist Party, criticized those left-wing movements that, for years, conceived a revolution without addressing the issue of racism. “No struggle can be left for later. Struggles have to have the space to be carried out here and now. We know that issues of race and gender have to be included within the class struggle”.

Kwame Nkrumah’s book, “Class struggle in Africa”, published originally in 1970, was first published in Brazil just now. Why is it important to read this author?

Cosmas Musumali: Capitalism is in crisis, and for a long time, we’ve been contented with neoliberal explanations. So ideas from people like Nkrumah are another point of view on class struggle. This crisis leads a lot of people to research in order to try to understand what’s wrong with capitalism.

Besides, it was clear for African countries that their independence had only been formally declared—economically, they were still dependent. It is this search for more humanized answers for the African continent that makes the ideas of people like Nkrumah all the more interesting.

For a long time, Nkrumah was considered a pan-Africanist who didn’t think much of African socialism. But that’s not true because, after being ousted from power [Nkrumah was president of Ghana between 1960 and 1966 until a coup d’État pushed him out], he studied and wrote plenty on socialism. His socialism was based on class struggle. That’s why he is even more interesting today.

How can we define pan-Africanism today?

By the mid 1890s, the movement became closer to civil rights vindications. But since 1945, pan-Africanism is about political rights. In 1960, it declared itself against neocolonialism and the oppression of the African peoples, wherever they may be.

The content might have changed, but the basic goal, which is emancipation, has always stayed the same. In the future, pan-Africanism will also be about emancipation in other dimensions, such as racial politics, environment, gender and the struggle against patriarchal structures.

People have to understand that pan-Africansim is a platform that is still necessary today for the struggle of the African people and their descendants, because, wherever they might be, they have to face specific situations that other people don’t.

It is noteworthy that exploitation and inequality are not exclusive to Africans and Afro-descendents, so working together with other peoples is important. For example, struggling for feminism, against sexism, or for the struggles of indigenous peoples becomes a duty for pan-Africanism.

How did Marxism contribute to pan-Africanism?

From the very beginning, Marxists became involved with pan-Africansim. From there on, it was possible to think that class struggle does not deny the struggle against racism, but includes it.

Throughout history, Marxists also made mistakes. Some of them neglected racism. Some Marxists believed in doing the revolution first and then taking care of racism—a very simplistic and cheap argument.

No struggle can be left for later. Struggles have to have the space to be carried out here and now. We know that issues of race and gender have to be included within the class struggle; in much the same way that Marxism cannot be separated from pan-Africanism. If we separate them, Marxism becomes mechanical and pan-Africanism is weakened.

Last year, after the coup d’État in Brazil, social and political movements have tried to create unity in the country. How can pan-Africanism help us with this process?

To my understanding, fascist tendencies are always active in the economic and cultural field. But they are not hegemonic. Working together against the government you have today in Brazil is urgent. People can’t afford the luxury of being fragmented.

Pan-africanists in Brazil must have a unified position about what’s going on. Brazilian Afro-descendants are the ones who are losing the most with the reforms that the government is passing, so we have to struggle even more and work side to side with other left-wing forces.

Pan-Africanism is not only important for Brazil, but for the world. So those who are outside the country have the duty to stand together with those who are here. Like the people who spoke here about the lives of black people in the United States [in reference to the Black Lives Matter movement], we should be talking about the same thing here today: “don’t destroy life in Brazil, and don’t destroy the welfare state”. That should be a claim of all Africans, no matter where they are.

Some reports predict that the African population is going to grow greatly in the upcoming years, while Europe’s is going to shrink. How does that impact the world?

This growth will create a different face for the world. In a hundred years, we will see more African skins and faces. They will be majority, but still won’t have political nor economic power. We have to keep in mind that the population growth is going to be led by the poorest country in the world. So the impact has to be taken into account in the plans so that the majority of the population isn’t marginalized like today.

The good news is that this young, black generation will have more access to education and will travel more. The advance of technology will put them in contact more easily. The question is: what values is this population going to contribute to the world? Ideally, they will bring values of equality, honesty and solidarity. Values that are going to help to change the society of the future. If you think about pan-Africanism, we are going to have to work on those values to build a better world. Coincidentally, these are the values of socialism.