In parts one and two of this series I’ve talked about the fact that there are two conflicting versions of intersectionality, one employed by some honest to god leftists who reach backward across decades to ventriloquize the term into the mouths of the Cohambee comrades, of Audre Lord, even of Claudia Jones and Sojourner Truth, and how this exists alongside another, hegemonic version of intersectionality deployed by the corporate funded lawyers, media and the nonprofit sector which invented the term in the first place for reasons Cohambee or Claudia Jones would never touch. I discussed how the dogged insistence of some leftists upon using a term which their enemies, given their access to funding and media, have far greater power to define invites confusion among those who do and do not know better and offers invaluable leftish cover to the establishment who are always eager to capitalize on the enthusiasm for change which only genuine leftists are adept at drumming up.

In this third and final installment I’ll touch upon the actual usefulness of intersectionality and of afro-pessimism in doing what all honest leftists want to do, namely taking power away from those who have it now and putting it in the hands of the poor and oppressed masses who make up most of the planet’s population. If we’re not asking and answering the question how can we take power, we’re wasting our own and other people’s time and energy.

This is the point where both intersectionality and afro-pessimism fail us. Afro-pessimism as I said in parts one and two is the more honest of the two, frankly admitting that it prescribes no particular remedies. Intersectionalism, with its multiple definitions offered by two separate camps is more slippery but equally useless at defining who currently wields power and how we might take it from them.

The most common vision of how intersectionalism might lead to a revolution revolves around a kind of “movement of movements” scenario in which the descendants of Africans, the First Nations, the Latinx, environmentalists, women, queers and others all find the reasons, the means and the moment to somehow climb out of their respective silos, come together and make something unprecedented happen. I recall hearing a version of this “movement of movements” vagueness articulated by the Green Party’s national candidates in 2016, and they are far from alone. A frequent refinement of that inarticulate vision posits that the “movement of movements” will be led by the most oppressed sectors of the movement of movements. Of course which sector possesses the most meritorious claim to movement leadership depends on who is making the claim.

As a guide to assessing who currently has power and how this power is used, let alone how to take it from them, even this leftish version of intersectionality simply doesn’t make the grade. It gives us no clues to what issues or circumstances under which the various components of this movement of movements might be somehow united and enabled to cooperate, or how this cooperation might confront our rulers and begin to wrest power from them.

The corporate middle of the road definition of intersectionality, which is little more than upholding the fullest participation of all oppressed groups – the queer, the black and latinx, the women, the first nations and all the possible intersectional combinations of these and others – Kimberle Crenshaw’s original vision, is even less useful. All this vision can do is integrate the ruling class, place black and queer and other faces in high places, and distribute the bitter punishments of austerity more equally.

While patriarchy, white supremacy and the other concerns of honest left intersectionalists are vitally important, context is everything. In the real world men wield actual power over women, white Americans enjoy privileges inherited from the settler-colonial heritage of the U..S., and cis het people often viciously oppress even the queers in their own families. But more than half of white women voters cast their ballots for Trump. There are tens of millions of unemployed and underemployed white people whose “privilege” is pretty much confined to the insides of their heads. We just had eight years of a black president, who surrounded himself at the Democratic convention with almost two dozen black generals and admirals. Black mayors in scores of U.S. cities are gentrifying and privatizing and administering austerity more effectively than any white mayrs could. And Condoleezza Rice has always been black, queer and a woman – for a time, with a Chevron oil tanker named after her.

The most reliable marker we have for delineating who has power, and over whom this power is enforced has for generations been economic class – a class analysis. And while class analysis alone is obviously insufficient to explain the settler-colonial paradigm, or many other situations it provides the essential framework into which white supremacy, patriarchy, empire and the rest fit, and a far clearer vision of the roadmap to power than intersectionality’s “movement of movements” ever will.

A class analysis tells us that unless and until we make the planet and the fruits of human labor and culture available to all, we haven’t accomplished anything like a revolution. A class analysis suggests that in addition to organizing black and latinx neighborhoods, prisoners and their families, and organizing fast food workers – really organizing them with shop floor actions and home visits which Fight For $15 doesn’t do – the U.S. left ought to look for opportunities to organize the large multiracial workforces in the strategic sectors which can bring significant pieces of society to a halt. Hospitals and health care workers. Public workers. Logistics. Power grids and the communications infrastructure. Teachers and edicational workplaces on all levels. That’s a realistic, though incredibly difficult path to leverage and power that intersectionality simply does not provide.

A notion of how far we have to go is provided by this graph, offered by economist Doug Henwood in Left Business Observer  depicting the drastic decline in recent decades in the use of the strike. 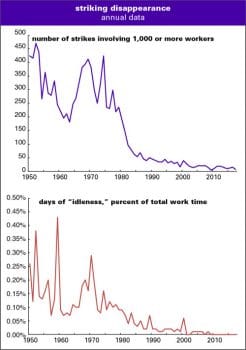 The proportion of U.S. workers in unions right now is around 5 or 6%. Without unions, you don’t have strikes. And the worker who lacks the power to withhold their labor is a kind of slave.

To walk, or more likely to climb the path to power the U.S. left must figure out how to creatively violate many laws, among them laws which currently outlaw or frustrate most workplace organizing and strikes. There’s no way around it. Revolutions are seriously illegal, that’s all there is to it.

Within ALL our formations we must strive relentlessly promote the leadership and visibility of women, queers and the other oppressed groups intersectionality purports to champion. I suppose you could call this a kind of intersectionality, maybe revolutionary intersectionality if you like, but leftists already have an old name for this, even though they’ve frequently failed to DO it. They’ve always called it solidarity.

When leftists have failed to bake solidarity into the bones of their supposedly class-oriented organizations, they failed, and those outfits inevitably betrayed their class, which has always been composed of blacks, whites, latinx, queers, women and multiple permutations of all these… as in fact, is the ruling class.

A final word on Afro-pessimism

I now believe I that I erred when I labeled afro-pessimism the “nappy headed stepchild of intersectionality.” Nappy-headed certainly, and in the age of Marvel’s black and beautiful Black Panther nappy headed is certainly no insult, and it never has been coming from my mouth. But not a stepchild. It is clear to me that afro-pessimism was arrived at quite independently from the hot mess that is intersectionality, though they seem to share some common elements. The closest familial analogy I can apply then is what we used to call on the south side of Chicago where I grew up is “play cousin.” But even that isn’t fully accurate because play cousins must claim each other, and as far as I know intersectionality and afro-pessimism do not.

I’m pretty certain afro-pessimism is not an emancipatory project that will help us control land, bodies, nature, or the fruits of human labor. But my certainty ends about there.

As some helpful souls with credible claims to knowing more about afro pessimism than I have pointed out on Facebook, it’s possible to find quotes from afro-pessimists saying they’ve no quarrel with class struggle or socialism. On the other hand, you can read and hear lot of afro-pessimist stuff that seems to say the opposite. So I must confess my ignorance and sincere bafflement on exactly what afro-pessimism means and doesn’t mean. Inasmuch as its influence seems mostly confined to academic spaces, and I dropped out of college almost half a century ago, I am probably not among those best qualified or inclined to peel that onion.