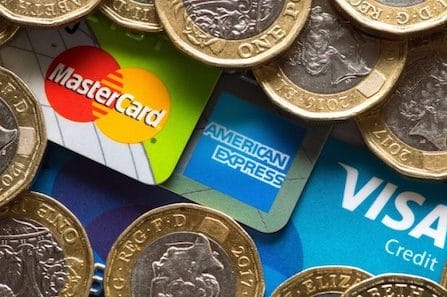 Well, the short answer is “yes, capitalism does depend on credit.” And it depends on debt, the other side of the “coin.” But the way it manifests itself is complicated.

They are all promissory notes, IOUs, to you. But try taking your banknotes into a bank to ask for payment and you’ll get a very dusty answer.

The most the bank will do is offer to “bank” your money, taking your notes in exchange for a statement that your cash is now “in” its coffers.

And of course, if your credit is “good,” it’ll probably offer you a credit card if you don’t already have one — a mechanism for encouraging you to replace what the bank owes you, your “savings,” with a debt that you owe to the bank for allowing you to buy stuff — from food and other essentials to that new TV or bed — on credit, this time without “real” money changing hands at all.

At its simplest, credit is the separation between purchase of a commodity and payment for it. That applies at the level of the individual, the company and the economy as a whole.

Borrowing and reimbursement probably go back to the origins of private property in prehistory, but, within capitalism, credit and debt assume a specific, monetary form. They are essential to the “success” of capitalism but are at the same time a major source of its instability.

Credit card “borrowing” is growing at rates between 7 per cent and 11 per cent per year. According to 2017 TUC research, the average household in the UK now owes a record £12,887 — around £8,000 per person — before mortgages are taken into account.

Some of the controversial lending that characterised the pre-2007 banking crisis has disappeared. You can’t take out a 125 per cent mortgage any more or constantly remortgage to go on holiday or buy a new car.

But the TUC says 3.2 million British households now spend over 25 per cent of their wage income on unsecured debt repayments.

New forms of lending are constantly being devised. Personal contract purchase (PCP) now make up more than 75 per cent of deals on new car purchases.

Many people rely on being able to shuffle debts from one company to another. Many have multiple credit cards. In the transition to a “digital economy,” credit and credit cards have become increasingly central to spending, while contactless transactions are a fairy wand to pay for lunch, coffee or other small purchases. Many people today don’t carry cash at all or carry what amounts to loose change.

British government debt — the national debt — is rather different from household debt. Effectively, the cumulative difference between money spent and government receipts, mainly taxation, and issued in the form of securities, government bonds and bills, is currently approaching £2 trillion, over 80 per cent of GDP or almost £30,000 per person. Interest payments account for 8 per cent of all government tax income.

Money has the peculiar property of being not just a token of exchange but a commodity in its own right — a property we’ll explore further in a separate answer.

Debt, in particular, has become a commodity, bought and sold between large financial institutions. Credit is the basis of what Marx called “fictitious capital” — value in the form of paper money, shares, stocks, securities and debt, all above and beyond what can be realised in the form of commodities or physical, productive capital.

Effectively, it enables companies to raise new “share capital” and banks to lend to borrowers many times the paper value of what investors have lent them. Fictitious capital effectively represents a claim on future production and on the value created by the worker.

Those who manage them have accumulated vast fortunes. Those who control the use of these “financial instruments” have also acquired enormous power, able to dictate policy to entire and supposedly “sovereign” nation states.

The process is inherently unsustainable, yet it was accelerated rather than checked by the crash of 2008 as banks went under or were “saved” through public investment, as with Northern Rock and RBS, and more generally through “quantitative easing,” transferring the burden of financial crisis from speculators to working people.

It was accompanied by the increased power of supranational financial institutions, including the World Bank and the IMF.

These were initially sidelined by the Ronald Reagan administration in the U.S. as contrary to neoliberal philosophy but hastily resurrected in the early 1980s when country after country became effectively bankrupt, unable to service their debts. They are able to impose “structural adjustment” programmes, cutting public expenditure, privatising health and social services, deregulating capital.

So credit is essential for the continuation of capitalism but also a major source of its instability. It is one of capitalism’s central contradictions.

Capitalism is still seeking to recover from the “banking crisis” of 2007-8 and the burden is being borne by the many to the advantage of the few.

Let’s leave the last word to Marx, who wrote:  “The two characteristics immanent in the credit system are, on the one hand, to develop the incentive of capitalist production, enrichment through exploitation of the labour of others, to the purest and most colossal form of gambling and swindling, and to reduce more and more the number of the few who exploit the social wealth; on the other hand, to constitute the form of transition to a new mode of production.

“It is this ambiguous nature, which endows the principal spokesmen of credit […] with the pleasant character mixture of swindler and prophet.”