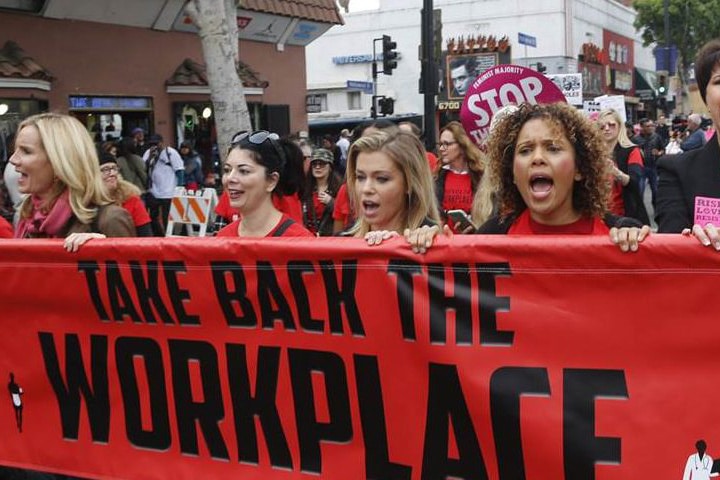 “We” inhabit a compelling moment. Similar questions are asked at many different sites. For #MeToo—can it move from individual indictments of particular men to the structural problem of racist/capitalist patriarchal exploitation? For other feminists—especially liberal and neo-liberal ones—can electing more women to office/s and inside the structure of power save democracy? For Starbucks: is it enough to talk about racism, or would it be better to do something, like hire many more people of color in your stores? For Roseanne: does firing her because she tweets racist dogma make enough of difference when she was hired in spite of the fact that she has been hatefully racist for years? And, Samantha Bee—is context to be rendered meaningless and the structure of power of no concern? She called Ivanka a cunt but while speaking up against misogyny, not for it.

Individual redress may assist in exposing the problem, more than resolving it. Singular attacks can even protect the oppression by seemingly addressing it in finite ways. And what about making more teachable moments? How much teaching does one need for fundamental change? This assumes you can convince the oppressor to give up some of their power. But which part? It is time to act and in ways that make certain structural practices impossible.

The structural presence of male privilege and with it sexual violence always applies everywhere. The presence of sexual violation in all moments of history—from chattel slavery, to indentured servants, to the family, to the office, to the factory, to the restaurant—exists across time and place. This is unquestionably not a singular, individual problem.

I am aware of how risky it is to say: everywhere, and also always. Patriarchal Racism is a universal hierarchical and punishing systemic power granting and power-denying edifice. It is universal with particular stories. The hardest part is that the structural edifice that powers racist/sexual domination is often invisible, silenced, and/or mystified. Maybe, in part, this is how it remains such an unrecognized force.

When women—embodied or self-identified—argue that sexual violence is individual and structural simultaneously it means that there is no personal solution to a political problem. What is the structural power that allows sexual violence? It has architecture and is designed to devalue and control—through lack of access to control our bodies and our lives. The structure that underpins rape and sexual violence configures a female commodification that is systemic and systematic. The dynamic terrorizes, manipulates, and denigrates. At the same time misogynist power can applaud and give recognition.

In this moment of #MeToo and #TimesUp it is crucial to see these violations as part of the larger political structuring of women in the sexual division of labor which violates their livelihood. Why not think of repairing the sexual violence with a guaranteed minimum income for all, or a $15 dollar living wage, or reproductive justice and full access to health care and abortion, or day care and parental leave that is not tied to a job, etc. These rights would open choices to leave unsafe settings. (See Tithi Bhattacharya, “Socializing Security, Unionizing Work: #MeToo as Our Moment to Explore Possibilities,” Verso, March 2, 2018.)

It seems impossible to know what actually can help make a real change just now. But the work is in beginning to make these claims, together, for each other. Recognizing the constant connection between our individual lives and the power-filled structures of misogyny and racism and capitalism is a start. It is a real challenge to solidify a social justice feminism for the 99 percent. (One such attempt is the Nia Project, located in Atlanta Georgia.)

It is time to recognize the overlap between sexual violence and all its other parts: mental illness, policing, prisons, poverty and the way misogyny is threaded through each of these parts. At issue is the universal underpinning of power by sexual violation/harassment/rape as the manifestation of patriarchy in all its racist and colonialist/capitalist forms. The violation shames, intimidates, and punishes women—very often silencing them. Silences must be ended in order to create collective, political, structural responses that make enough of a difference.

You cannot reform racist patriarchy enough to wipe out sexual violation/violence. The hierarchy of wealth and fame will have to be toppled if sexual violence is to be eradicated. The individual commodification of our bodies along with every other dimension of ourselves must be re-imagined. The hierarchy of white supremacy must be hollowed out. Sexual violation is a form of dehumanization that is replete in the structures of capitalism—the commitment to profit rather than human needs; and the system of white domination—where people of color suffer the dehumanization of discrimination.

Harvey Weinstein raped and molested hundreds of women; Bill Cosby accosted over 60 of us; Larry Nassar violated over 300 girls. This is more than individual hubris. The stunning ubiquity and repetition screams out for a power-filled redress. Tinkering with the system is not enough. The structures are brilliant and impossible. Liberalism is insufficient because it protects the very foundation of racist patriarchy that needs dissolution. Reform is inadequate if it is not tied to revolutionary goals.

#MeToo is a collective political expression to expose the secrets that cover up the power systems. It should not be understood as simply an individual personal indictment of isolated personal stories. It needs to become a movement joined with other movements. (See “MeToo movement founder Tarana Burke says time for talk is over as she calls for action,” Daily Telegraph, May 6, 2018.)

Sexual violation needs political status. It needs grounding in political vision to help guide and mobilize revolutionary attention. It needs to be understood as the putty that holds together the overlapping co-dependent violative and comprehensive systems of dehumanization. Sexual violence makes it hard to resist. It makes it hard to live.

Today’s iteration of #MeToo has developed in neoliberal America. It sometimes suffers from a hyper individualist and hyper a-political articulation.

It is the connection between the individual atrocities of sexual violation and their structural privilege that our sites must be focused. Otherwise individual men can be punished but the hierarchy of cis/hetero/white privilege remains in place—just possibly re-jiggered for the moment. Stories picked up by mainstream media expose individuals but we must mobilize to show the connection to practices of racist misogyny that empower individual males.

Radical feminists of the late 60s and 70’s were famous for their insight that “the personal is political”, that there is a politics to sex/sexual politics. But this insight has not fostered the revolutionary and structural assault that it so richly demands. Too often the personal is reduced to the political; or the political to the personal—and an assault on the site where they interlock is hard to locate.

Given this “we” are often complicit in the very oppressions that define us. I do not use “complicit” as a charge against, but rather a recognition that each of us is embedded in the structures of power we inhabit, and silence operates as protection. The more “we” know about Guantanamo, the carceral state, water-boarding, corruption, hunger, homelessness, refugees, Rohingya, the more complicit “we” become.

Maybe the information and exposure is meant to defeat us rather than inform and embolden—that there is too much to change: Guantanamo; torture and Black Sites; the Muslim ban; police killing Black youth; the expulsion of Haitians, Hondurans; reversing DACA; ICE raids; limiting abortion access and counseling.

Some people turn away.

Many of us cannot, do not.

“We” need to fight the complicity. “I” am just so eager to deal with the almost-impossible-to-articulate connect between the personal and the political, the individual and the structural. The personal is political becomes reductionist in either direction. Individual and structural sites of power are always inhabited together—it is what makes fabulous anti-racist/anti-capitalist feminist thinking so hard. It is part of our structural dilemma.

Rich white men rule, but with a new defensiveness and old anger. Often it looks like chaos. And, they are not ruling nation-states as they once were known, but locales of the global economy. The less economic borders matter the more nationalism is constructed with renewed white supremacist racial and sexual identities.

Trump, alongside Modi in India, Duterte in Philippines, Netanyahu in Israel, epitomize the right-wing chaos that surrounds all of us. But Trump, who speaks of women as pussy and thinks most of us as “hookers” in one form or another, also consolidates his structural power with white women.

Sarah Huckabee, as Trump’s press secretary lies daily; Nikki Haley as US ambassador to the UN apologizes for slaughter and massacre of peaceful demonstrators by Israel and Zionist colonialism; Gina Haspel the new CIA director defended torture and then under pressure says it was a mistake, but not morally reprehensible. (See Jeremy Schahill, “US Navy Doctor on Gina Haspel Torture Victim: ‘One of the Most Severely Traumatized Individuals I Have Ever Seen’,” The Intercept, May 17, 2018) 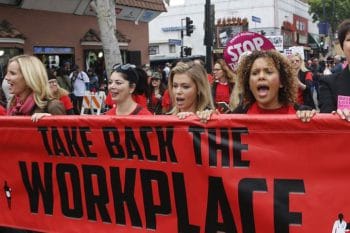 Betsy Devos, education secretary knows little of public schools and she is not interested anyway. Melania pretends to be his wife. Ivanka, his daughter pretends to be a feminist.

Misogyny is a complex structural system of power that underpins and coalesces with white supremacy and capitalism. Yet female bodies can oversee misogyny and deny the 99 percent of women their agency.

It is more important than ever to expunge the sexual violence that protects all this. As we head into the 2018 elections feminists of all sorts must make sure that there is a revolutionary commitment to restructure the massive system of oppression maintained by sexual violence. Becoming a part of the existing structure is not enough—nor is simply being female. Reforms that are potentially revolutionary must be the guide.

Zillah Eisenstein is a well known anti-racist feminist author, activist, and professor. She has written more than 12 books and hundreds of articles detailing the continual struggles for social justice by women of all colors across the globe. See her website for more details.