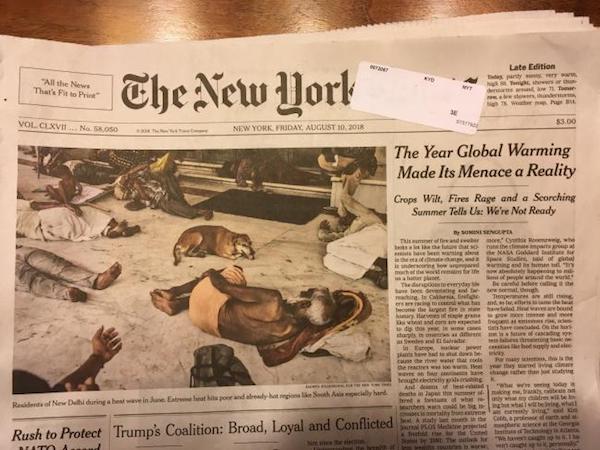 The Fires This Time and Their Implications for Ecosocialists

“Deindustrialization.” That’s a word you virtually never hear in the debate around global warming. Not surprising. It’s a word that’s loaded with negative implications: economic collapse, mass layoffs, falling living standards. Who wants to think about those, let alone think about this as a strategy of suppressing CO2 emissions? Imagine suggesting to the next oil driller, auto worker or airline flight attendant you run into that the only way to stop global warming is stop producing oil, park the cars, and ground the airplanes. Even the word “degrowth” is beyond the pale of thinkable thought in mainstream discourse. Yet we had better start thinking and talking and organizing around this strategy because, as is becoming more and more apparent, deindustrialization is the only means to avert global ecological collapse. If we do not organize a rationally-planned partial but very substantial deindustrialization of the overindustrialized nations of the North including China, Mother Nature is going to do it for us in a much less pleasant manner and we will face the prospect of the collapse of civilization in this century.

If humanity had taken serious steps to reduce emissions decades ago in the 1980s when climate scientists began warning us (as the New York Times magazine of last weekend reminds us) then perhaps we wouldn’t be in the fix we’re in right now. But we didn’t and haven’t and so now scientists tell us we face a CLIMATE EMERGENCY. For decades the developed economies of the world and the rogue party-state of China have ignored the threat of global warming and kicked the can down the road on the assumption “dangerous” global warming is not imminent or not much of a threat to them at least in the near future. After all, we in the temperate regions of the northern hemisphere have not suffered so much because the heating is more extreme at the poles than the temperature latitudes. The Arctic and Antarctica are melting very fast, with immediate and dire implications for the whole world. And global warming is hitting the neo-tropical Middle East, India and Africa very hard. But in the U.S. all the media talks about is increased flooding along coastlines, more frequent droughts in the West and Southwest, more fires in the west and so on.

But this summer, the belt of furious fires all around the northern hemisphere from California to Greece to Japan which cost the lives of hundreds has finally  grabbed public attention, even the media. I don’t know if this is the first time that the NY Times even published an article on global warming on the front page (above the fold) but I believe this is the first time it has explicitly blamed global warming for the fires this time in a top-of-the-page headline. And this is only the beginning. As climate scientist Michael Mann is quoted in the lead editorial of the New York Times of August 10th:

What we call an ‘extreme heat wave’ today we will simply call ‘summer’ in a matter of decades if we don’t sharply reduce carbon emissions.

Yet from the first warnings of scientists and the first efforts to come up with plans to restrain emissions, all efforts to reduce emissions have been subordinated to maximizing economic growth: Whatever we do, we MUST NOT slow economic growth. Or, as GW Bush Sr. put it: “We will never sacrifice the American way of life.” So instead of simply imposing rationing of fossil fuels, suppressing vehicle production, grounding civilian aircraft (all of which President Roosevelt did during WWII), all mainstream efforts from the voluntary curbs of Kyoto in the 1990s to the cap & trade schemes of the 2000s to the carbon tax schemes of today, have been explicitly premised on the assumption that they must not impede growth. In other words, they were all designed to fail. Which they have. In result, as global economic growth soared since the 1980s, so have emissions. So now what?

We certainly can’t expect any change from the powers that be. So long as we live under capitalism, governments, industries, industrial unions, as well as most workers and consumers will continue to prioritize growth over saving the planet because, given capitalism, what else can they do? The planet may collapse tomorrow but degrowth or deindustrialization would mean I’m out of a job today. This is how we drive off the cliff to collapse — “unless” (as the Lorax said) . . .

Unless we change the conversation. Unless we get people to start thinking about and talking about and working for a viable alternative to the market-driven collapse of civilization. Our job, as ecosocialists is to put forward a practical plan to slam the brakes on emissions, an EMERGENCY RESPONSE TO THE CLIMATE EMERGENCY. This plan has to begin with brutal honesty:

This is the public conversation the whole nation and the whole world needs to be having right now. There is no other alternative. It’s up to us ecosocialists to motivate this conversation because no mainstream organization is willing to risk challenging the government, capitalism, unions, workers, and consumers, let alone taking them on all together. Yet the abject failure of all mainstream approaches opens the way for us to put forward more radical approaches to a mass audience. Awful as things are at the moment, this presents a huge opportunity to ecosocialists. But we really need to get moving on this, develop educational materials of all kinds from videos to bumper strips, organize forums, teach-ins, write opinion pieces, and develop ecosocialist politics within the rapidly growing 45,000-member Democratic Socialists of America, and so on.

Richard Smith is a founder of SystemChangeNotClimsteChange.org and a member of the New York City chapter of Democratic Socialists of America and the national DSA Climate and Environmental Justice Working Group.