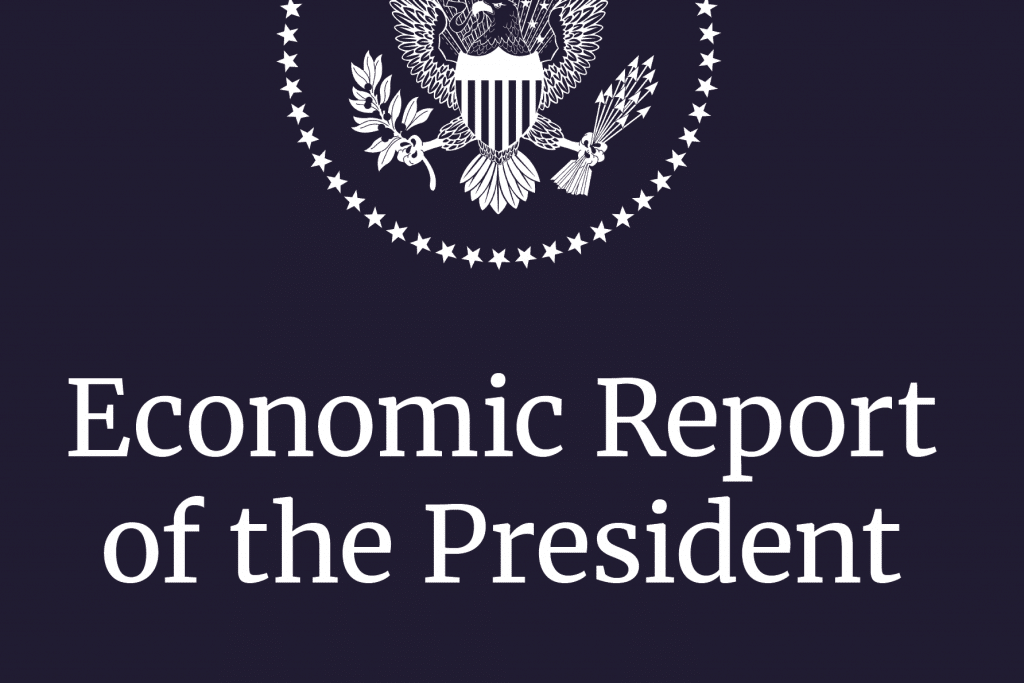 Something unusual has just happened. The current, March 2019 Economic Report of the President (henceforth Economic Report) has devoted one full chapter—chapter eight, titled “Markets versus Socialism”—to attacking socialism.[1] The only intellectually honest part of the Economic Report is the reason given for allocating no less than forty-five pages to socialism:

There was a time in American history when grand debates over the merits of competing economic systems were front and center, and the terms of the debates and characteristics of the competing views were widely known. It is clear that such a time may be returning. Detailed policy proposals from self-declared “socialists” are gaining support in Congress and are receiving significant public attention.

The bourgeoisie in the United States is getting nervous and the technocrats of the capitalist state have responded to the growing threat by going out of their way to discredit the increasingly popular alternative of socialism.

Unfortunately for the U.S. ruling class, the authors of the Economic Report did a rather lousy job in their attempt to discredit socialism. The chapter starts with definitions of socialism and presents its criticism essentially in four parts:

Each section contains specific cases, country references, and plenty of repeated flawed arguments. In this brief article, we will only focus on the two most significant criticisms: the “unintended consequences” of the collectivization of agriculture in the USSR and the performance of central planning.

The “Unintended Consequences” of the Collectivization of Agriculture

The Economic Report states that a “famine ensued” in 1932–33, claiming that “about 6 million people died from starvation.” To illustrate that this human loss is a concrete example of the failure of socialist economic policy, the Economic Report includes the following graph showing the annual trend of births and deaths in Ukraine between 1924 and 1939.

Figure 1: Mortality for Ukraine given in the Economic Report 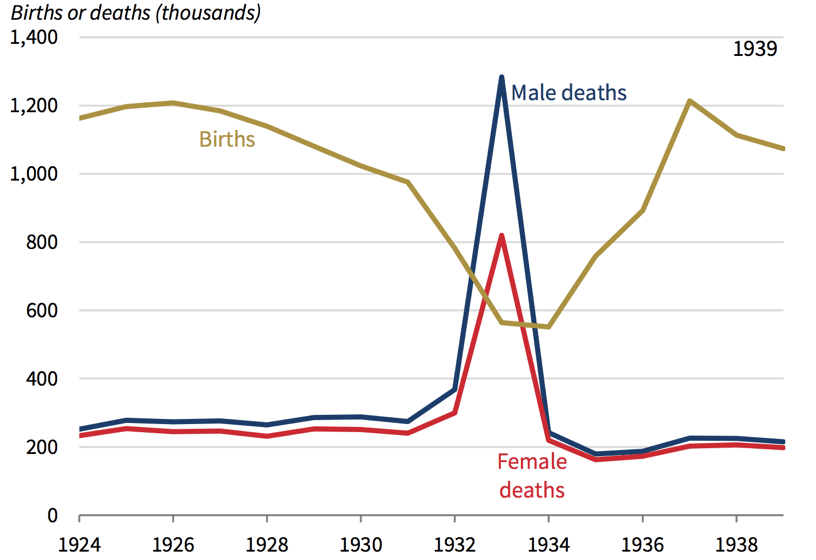 Mortality for Ukraine. Source: Economic Report of the President.

The authors claim not only that millions died as a result of famine, but furthermore that “millions of people more were not born.” The famine is then blamed on flawed socialist economic policies. The extent to which the famine was due to policy decisions is disputed by historians, but even if we were to accept that it was a matter of policy rather than a bad harvest, it would not put the matter to rest.[2]

To have a broader and comparative view, one should look at the period of capitalist restoration after 1990. For example, in the case of Ukraine, population trends present a rather dramatic picture. As can be seen in the following chart, the transition from socialism to capitalism led to a dramatic population decline in Ukraine. Indeed, the restoration of capitalism killed between two and three times as many people in an already developed Ukraine as the famine of the 1930s did during a time of poverty and underdevelopment.

Table 1: Elevated mortality in Ukraine subsequent to the restoration of capitalism

Figure 2: Mortality and excess deaths in Ukraine following the restoration of capitalism 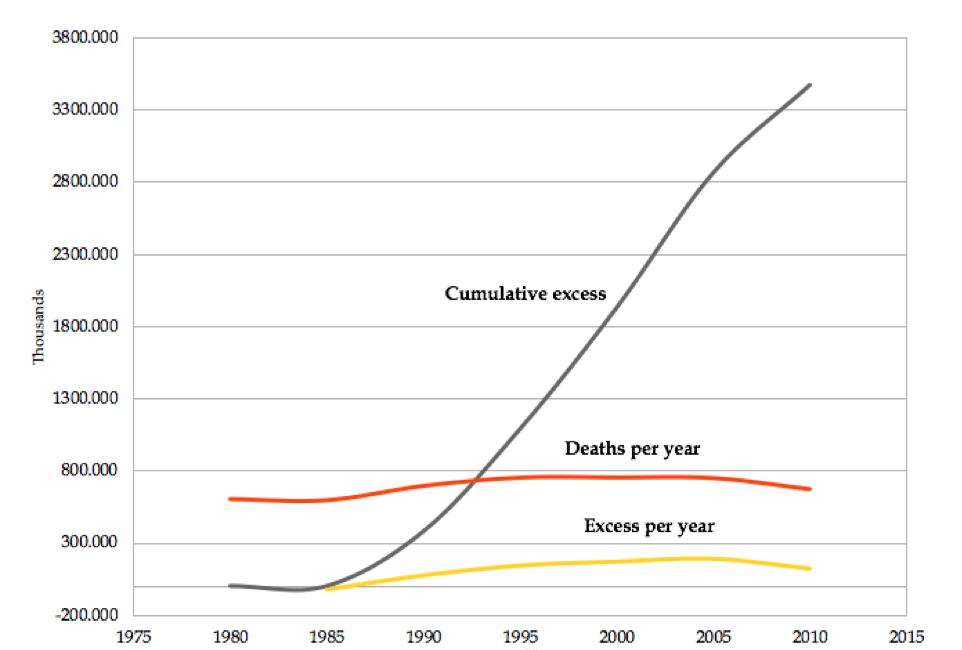 A similar trend is also true of Russia. The overall excess deaths following the introduction of capitalism in Russia amount to some 12 million over the period of 1986 to 2009.

Table 2: Excess deaths after the introduction of capitalism in Russia

Figure 3: The evolution of Russian birth and death rates in Soviet (non-shaded) and post-Glasnost (shaded) 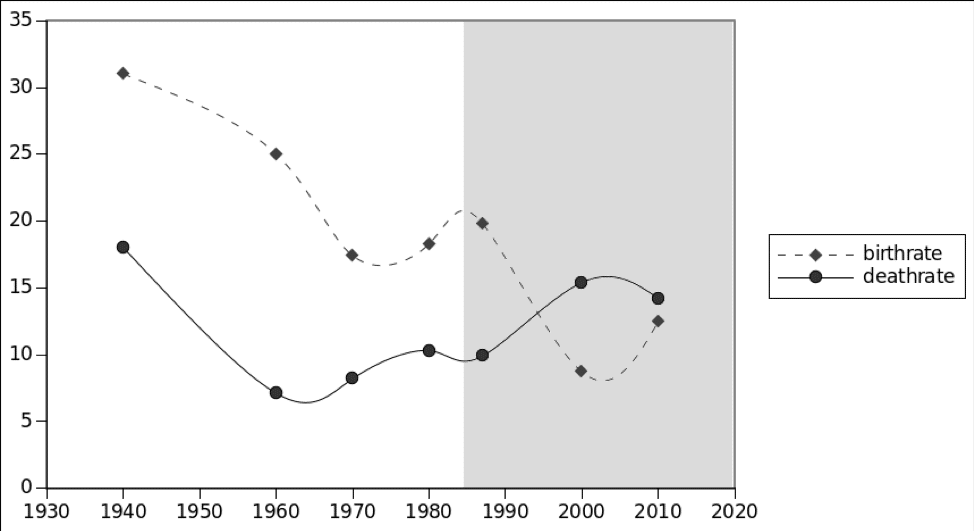 It should come as no surprise that, having driven half the population to poverty and despair, capitalism in advanced capitalist countries also finds itself ultimately unable to reproduce the workers on whom it depends.

The United States, and now the United Kingdom, are already showing declines in life expectancy. Deaths from poisoning, suicide, liver disease—afflictions of poverty and despair—are taking an increasing toll (Figure 4).

A large part of this toll, illustrated by the poisonings curve in the following figure, is caused by the deliberate promotion of opiate addiction. From the East India Company’s pushing of opium to the Chinese in the 1840s, to the Bayer company’s selling over-the-counter heroin as a supposed cure for morphine n 1895, to Purdue Pharmacy’s aggressive marketing of Oxycontin starting in 1995, companies have viewed addicts as a secure source of income. Thus, “legitimate” drug companies have opened the door to addiction, which has then been further exploited by the capitalism of illegal drug rings. Their profits are then laundered via blue chip banks like HSBC, a bank that was founded from the very profits of the opium trade to China.

Figure 4: The rise in mortality due to the diseases of despair, United States 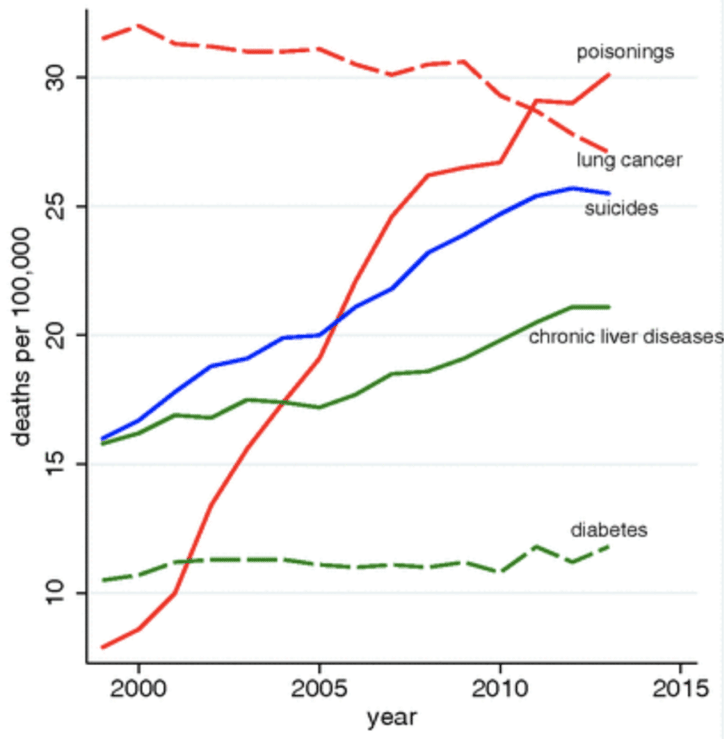 Note: Poisoning deaths are primarily the result of drug overdoses; and chronic liver disease is largely due to excessive alcohol consumption.

If it is the case that, allowing for any peculiarities of national character or national culture, socialism is markedly inferior to capitalism, then the transition to socialism should have been associated with a decline in economic growth—and the transition to capitalism with an acceleration. This indeed was the promise held out to the people of Russia around 1990 by U.S. economists with a similar outlook to those who drafted the Economic Report. Liberal theory held that once enterprises were free from the state, the “magic of the market” would ensure that they would interact productively and efficiently for the public good. But this vision of the economy greatly overstated the role of markets. Even in so-called market economies, markets of the sort described in economics textbooks are the exception, restricted to specialist areas like the world oil and currency markets. The main industrial structure of an economy depends on a complex interlinked system of regular producer/consumer relationships in which the same suppliers make regular deliveries to the same customers week-in and week-out.

In the USSR, this interlinked system stretched across two continents and drew into its orbit several other economies: Eastern Europe, Cuba, North Vietnam. Enterprises depended on regular state orders, the contents of which might be dispatched to other enterprises thousands of miles away. Whole towns and communities across the wilds of Siberia relied on these regular orders for their economic survival. Once the state was too bankrupt to continue making these orders, once it could no longer afford to pay wages, and once the planning network that had coordinated these orders was removed, what occurred was not the spontaneous self organization of the economy promised by liberal theory, but a domino process of collapse.

Without any orders, factories engaged in primary industries closed down. Without deliveries of components and supplies, secondary industries could no longer continue production, so they too closed. In a rapid and destructive cascade, industry after industry closed down.

The figures in table 3 show how far the economy had regressed. These figures show how little recovery there had been, even after thirteen years of operation of the free market.

Source: Goskomstat (2004. Table 14.3). Note that all sectors of the economy have drastically shrunk over this 13-year period.

If the economy had continued to grow even at the modest rate of the later Leonid Brezhnev years (say 2.5 percent), then industrial production would have stood at 140 percent of 1990 levels. The net effect of thirteen years of capitalism was to leave Russia with half the industrial capacity that could have been expected even from the poorest performing years of the socialist economy.

U.S. economists might argue that this poor performance was merely the result of making such radical changes to the economic system. But thirteen years of abysmal economic performance?

Now let us contrast this period of (re)introduction of capitalism with the first years of transition to a socialist economic system. In this case, we have the beginnings of a truly revolutionary shift in the mode of production itself—with no prior precedent, an uneducated population, and no economic advice from the outside world. If it is anything like the transition to capitalism, one would expect to find evidence in key economic statistics. But what do we see in table 4? Rapid growth!

Between the 1930s and ’60s, the economic superiority of socialism to capitalism was widely recognized and accepted. The Economic Report laments that this was the case and worries that the same situation may be returning. In the aftermath of Ronald Reagan and Margaret Thatcher, and Western victory in the Cold War, it briefly looked as if the verdict of history had been reversed. In the early 1990s, a triumphant Western economics profession declared that socialism had failed, and that the superiority of the market economy had been decisively established. But this is to mistake a political and military victory for an economic one.

If one compares the promises of Western economists to the reality of the Soviet economy, the promises looked great. Faced with the growing popularity of socialist politics in the United States, the authors of the Economic Report go on as if the promises of the 1990s were kept. But the gap between promise and the grim reality of capitalism in Russia has became too glaring for them to face: a drastically shrunken economy and millions of deaths. It is no wonder that Donald Trump’s economists retreat to the fantastic and discredited promises of the Reagan era.

[1] Economic Report of the President Together with the Annual Report of the Council of Economic Advisers (Washington, D.C.: Government Publishing Office, 2019), available at http://govinfo.gov. Past Economic Reports have, of course, included occasional references to socialism. However, they always lacked substantive criticism. The 1991 and 1992 Economic Reports, for example, referred to socialism only once or twice, claiming that “worldwide changes promise to settle intellectual debates that have persisted for decades.”

Paul Cockshott has studied economics and later computer science at Heriot WattUniversity and Edinburgh University, and has worked as a researcher and lecturer at the universities of Edinburgh, Heriot Watt, Glasgow and Strathclyde. He is an Honorary Fellow at the University of Glasgow.