The Big Loser in the Iowa Debate? CNN’s Reputation

CNN debates have been marked by a tendency to pit one candidate against another, American Gladiators-style (FAIR.org, 8/2/19), so it’s no surprise that the cable network took its own journalistically dubious “scoop” (CNN, 1/13/20)—about Bernie Sanders allegedly telling Elizabeth Warren in 2018 that “he did not believe a woman could win” a race against Donald Trump—and used it as the basis of questions to both Sanders and Warren at its pre–Iowa caucus debate in Des Moines (presented jointly with the Des Moines Register). 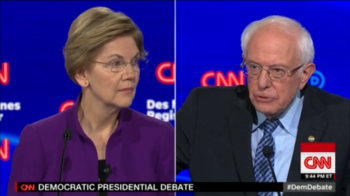 CNN‘s questioning assumed that Elizabeth Warren was telling the truth and Bernie Sanders was lying about a conversation they had more than a year ago.

But it was less predictable that CNN would frame those questions in such a nakedly one-sided manner, with wording that presumed that the truth was  known about what was really said in a disputed, year-old private conversation. “Senator Sanders,” began CNN political correspondent Abby Phillip:

Senator Warren confirmed in a statement, that in 2018 you told her that you did not believe that a woman could win the election. Why did you say that?

Phillip obviously knew that Sanders had unequivocally stated that he had not said that. But by inserting the word “confirmed” into the preface, she put Sanders in the position of someone denying reality—despite the fact that his alleged remark would contradict his public position going back 30 years. And immediately after getting Sanders to reiterate his statement that he never told Warren that a woman couldn’t win the election, Philip turned to Warren and asked: “Sen. Warren, what did you think when Sen. Sanders told you a woman could not win the election?”—a question premised on the assumption that Sanders had just lied about what he had said. 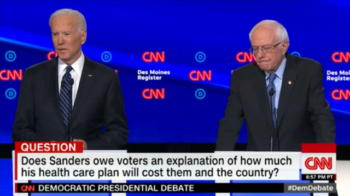 CNN asked both Joe Biden and Bernie Sanders if Sanders should explain how much his healthcare plan will cost.

CNN‘s healthcare questions were also nakedly one-sided. In the first debate the network hosted (7/30/19), Jake Tapper started off the night by asking Sanders whether “tak[ing] private health insurance away from more than 150 million Americans, in exchange for government-sponsored healthcare for everyone,” was “political suicide,” and went on to focus on the cost of Medicare for All (FAIR.org, 8/2/19). Last night, Phillip’s first question on healthcare likewise went to Sanders, revisiting that focus on cost:

Senator Sanders, you have consistently refused to say exactly how much your Medicare for All plan is going to cost. Don’t voters deserve to see the price tag before you send them a bill that could cost tens of trillions of dollars?

After Sanders explained that Medicare for All “will cost substantially less than the status quo”—under which healthcare is projected to cost $52 trillion over the next decade—Phillip turned to Biden. But instead of asking him to answer any criticisms of his own plan, she offered him the same Sanders-bashing frame:

While Phillip gave every other candidate a chance to weigh in, she didn’t give them substantive questions. She then returned to Sanders with another question about the cost of his plans:

Senator Sanders, your campaign proposals would double federal spending over the next decade, an unprecedented level of spending not seen since World War II. How would you keep your plans from bankrupting the country?

CNN’s Wolf Blitzer led off a series of foreign policy questions with a similarly loaded question for Sanders:

Sen. Sanders, in the wake of the Iran crisis, Iran’s Ayatollah Khamenei has again called for all U.S. troops to be pulled out of the Middle East, something you’ve called for as well. Yet when American troops last left Iraq, ISIS emerged and spread terror across the Middle East and, indeed, around the world. How would you prevent that from happening again?

So Sanders was asked to defend his policy—identified as being the same as that of a hated official enemy—against the charge that it would “spread terror…around the world.” (Blitzer’s blaming ISIS on the withdrawal from Iraq evades the reality that there would never have been an ISIS were it not for the Iraq invasion.)

Rather than giving similarly poison-tipped questions to Sanders’ rivals, Blitzer went on for the most part to merely ask them to respond to what had already been said: “Vice President Biden?… Senator Klobuchar, what’s your response?… Mayor Buttigieg, you served in Afghanistan. Who’s right?” Politico’s Ryan Lizza (1/15/20) referred to this as Blitzer doing “an admirable job teasing out some of the subtle differences that have crystallized among Democrats in the post-Obama world.” 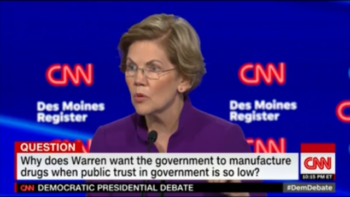 Elizabeth Warren was also painted as a bearer of fringe ideas that “will scare away swing voters.”

It’s important to remember that CNN’s blatant insertion of its own point of view into the presidential debate doesn’t  reflect a mere personal dislike of Sanders, but rather a consistent ideological orientation. Warren, despite being used as a blunt object with which to bash Sanders, was also given questions that likewise painted her as a champion of way-out ideas, as with this from Phillip:

Why does it make sense for the government to manufacture drugs, especially when public trust in government is near historic lows?

Of course, it wouldn’t be elected officials making the drugs, but government agencies—and it’s the former and not the latter who are generally distrusted by the public (Pew, 9/6/19). The drug industry, meanwhile, is the least trusted of all major industrial sectors (Gallup, 9/3/19)—but why spoil the premise of a good “gotcha” question?

When Phillip asked a series of questions that were supposed to highlight the “unique challenges” each candidate faced in “prov[ing] to Democratic voters that you’re strong enough to take on Donald Trump,” Sanders was told that “more than two-thirds of voters say they are not enthusiastic about voting for a socialist,” while Warren was told that voters are worried her policies “will scare away swing voters you need to win this race in November.” 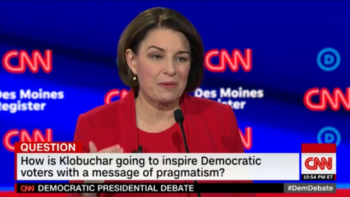 CNN to Amy Klobuchar: Please explain how the word you have chosen as your campaign brand will go over with voters.

Phillip’s question to centrist darling Amy Klobuchar, by contrast, was set up with the senator’s self-description as “a practical candidate who can get things done,” and the observation that she’s “dismissed some of the ideas that are offered in this primary as pipe dreams”; in other words, she’s taken the same position on issues like Medicare for All that’s been consistently advanced by media monitors. That led up to this aren’t-you-really-too-conscientious? softball:

How are you going to inspire Democratic voters with a message of pragmatism?

Her question to Biden didn’t even rise to that level of challenge:

Vice President Biden, the eventual nominee will face President Trump, who has no problem mocking people, using insulting nicknames, slinging mud and telling lies. The debate against him will make tonight’s debate look like child’s play. Are you prepared for that?

The question to Buttigieg in this segment of the debate was the only one that brought up race in a debate that was notable as the first with an all-white cast of candidates, following the withdrawal of Kamala Harris, Cory Booker and Julián Castro, and the exclusion of Andrew Yang for not meeting polling thresholds. Race wasn’t raised at all in the questions in the last debate CNN ran (10/15/19), in conjunction with the New York Times (FAIR.org, 10/17/19). In the lone reference to race in the Iowa questioning, people of color appeared merely as a desirable voting bloc:

You’ve had trouble earning the support of black voters…support that you’ll need in order to beat Donald Trump.

The complacent worldview behind CNN’s questioning was summed up by Rolling Stone(1/15/20):

In an era of endless war abroad, painfully and often prohibitively expensive healthcare and education at home, and a climate crisis that threatens to make the planet inhospitable to its 7 billion human inhabitants, the challenges of change were treated as paramount or even insurmountable, while the costs of maintaining the status quo barely mentioned. 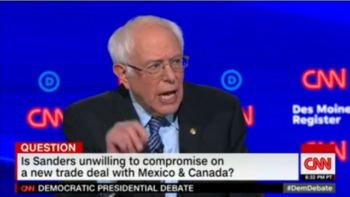 When Sanders tried to explain how NAFTA 2.0 failed to address the climate crisis, the moderator declared that off limits: “We’re going to get to climate change, but I’d like to stay on trade.”

That attitude was nowhere more on view than in the debate’s approach to the issue of climate. When Sanders was asked by Des Moines Register political correspondent Brianne Pfannenstiel why he opposes Trump’s renegotiated NAFTA treaty, despite its endorsement by the AFL-CIO—“Are you unwilling to compromise?”—he pointed out that

every major environmental organization has said no to this new trade agreement because it does not even have the phrase “climate change” in it. And given the fact that climate change is right now the greatest threat facing this planet, I will not vote for a trade agreement that does not incorporate very, very strong principles to significantly lower fossil fuel emissions in the world.

But Pfannenstiel would not stand for having the serious business of trade agreements mixed up with trivia about threats to the planet:

We’re going to get to climate change, but I’d like to stay on trade.

Much later, when the topic did return to climate, suitably divorced from any other subject, it was with this inane question:

Mayor Buttigieg, you have talked about helping people move from areas at high risk of flooding. But what do you do about farms and factories that simply can’t be moved?

One really does get the impression that if CNN were holding a debate on the Titanic, the first question would literally be about rearranging the deck chairs.