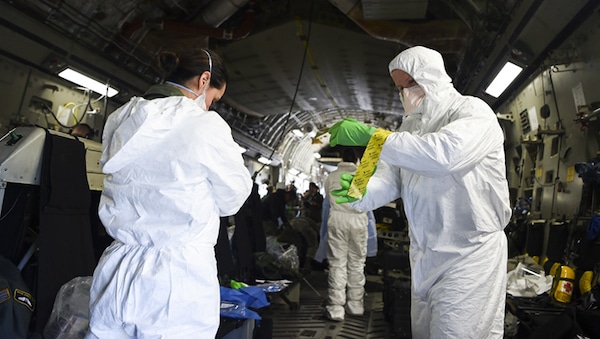 The Following is an expanded version of a Radio Commentary delivered over WAMC-FM on March 6, 2020 by Michael Meeropol, Professor Emeritus of Economics at Western New England University.

I am old enough to remember that shortly after the 1968 election of Richard Nixon to the presidency, his campaign manager (and future U.S. Attorney General) John Mitchell said, “Watch what we do not what we say.” He was asking the public to in effect disregard some campaign rhetoric as a guide to actual government policy.I think this advice is particularly useful for the general public in the era of Trump. He is at the same time a thoroughly ignorant individual and a pathological liar. Thus, it is impossible to learn anything of value by just listening to him.

But as I have stressed many times in these commentaries, what he and his administration have done (and hope to do) is incredibly significant.

Perhaps his most significant action of the Trump Administration has been to withdraw from the Paris Climate Accord which—though ridiculously insufficient given the enormity of the challenge of global warming—at least acknowledged the world wide problem. Trump’s denial of the science of climate change and of the urgency to take action will literally cost millions of lives in the future–long after he has enjoyed his millions of dollars over the balance of his life. (If you believe in Heaven and Hell, there is a small consolation that he will be burning in Hell forever.)

Meanwhile, his Education Secretary is busy protecting rip-off private colleges, and his tax cut is enriching giant corporations and cutting the tax burden on high income individuals. And of course we cannot forget all the judges with which he is packing the Federal Judiciary. In short, just looking at what he has DONE reveals that despite his unhinged dishonest rhetoric, he has been an effective President. That is why I believe that the prospect of his re-election this election year represents an existential threat to American democracy and to the ability of the planet to sustain human life.

In the context of the Coronavirus pandemic, the best way to understand what his administration is DOING is to have a look at the proposed 2020 budget for the CDC, the Centers for Disease Control. The last two years of budget authority and the proposed 2020 budget authority is available with one click at the CDC website. There it is in black and white. 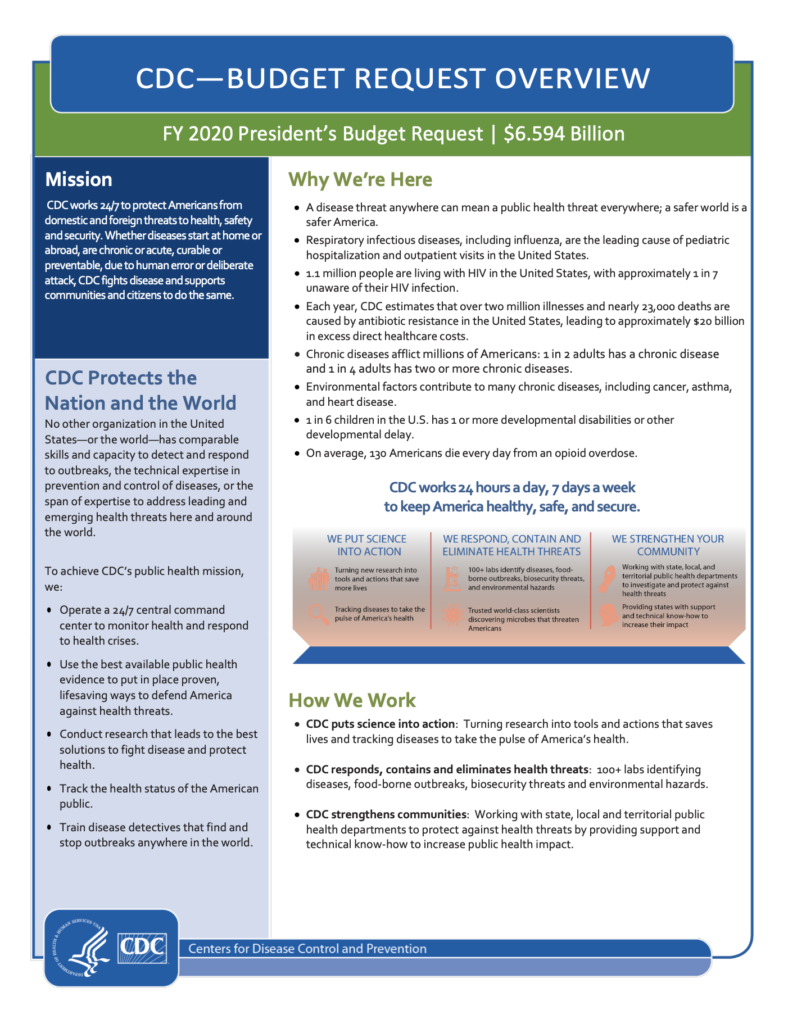 Please note that this is not the opinion of a Democratic Party member of Congress. This is not an opinion piece in the New York Times. This is statistics from Trump’s own CDC and Treasury Department.

After taking the 2018 budget authority of $6.8 billion and shaving it slightly in 2019 to $6.5 billion, the 2020 budget proposal slashes it all the way to $5.2 billion. This cut is more than the numbers themselves seem to indicate. First of all, population has increased since 2018 and even a level-funded budget would deliver less services to the people. Second, prices have increased as well.  (Eyeballing one chart suggests an average of 2% medical cost inflation in 2018 and over 3.5% in 2019.) Thus, the appropriation in 2020 needs to be 5.5% more than in 2018 just to keep up with the rising cost of medical equipment and personnel.

Absent the Coronavirus, these proposals for CDC funding probably would have flown under the radar and perhaps even passed when all the shouting was over. The failure of government spending to keep pace with needs on the civilian side of the budget (aside from automatic spending on entitlements like social security, Medicare and Medicaid) is nothing new. Cutting everything but defense has been a desire by right-wing policy makers since the administration of Ronald Reagan. So this should not be taken as a criticism only of the Trump Administration. (And even before the Coronavirus hit, it is probably true that the House with its Democratic majority would have fought to give more budgetary authority to the CDC.)

And in normal times, when, for example, there is no immediate health emergency, some of the money spent by an organization like the CDC on preparedness might appear “unnecessary.” It’s sort of like on-going maintenance of bridges, tunnels, railroad beds, airport runways. Such expenditures are necessary over time but they are not necessarily of immediate concern. And so cities and states–and of course the federal government–will often defer regular maintenance when the budget it tight.

Spending by the CDC in order to prepare to combat an epidemic fits into an economic conception known as “option demands.” An option demand is a desire by consumers in general to have the “option” of consuming a service in some kind of unforeseen circumstance. The traditional example is, I would like the “option” of taking a train from Boston to Washington DC should bad weather ground airplanes.  Unfortunately, there is no way to make train service between those two points profitable just to satisfy our desires for it to be there when we need it. Thus, the government either has to supply the service (Amtrak) or heavily subsidize the private sector provision.

When the Ebola outbreak occurred, I delivered a commentary that referenced the fact that investing research money to find an Ebola vaccine had not been profitable for private sector pharmaceutical companies and that was why when the outbreak occurred, there were no vaccines on the shelf ready to use. Something similar happened back in 2016. In an article entitled, “Scientists were close to a coronavirus vaccine years ago. Then the money dried up” (Mike Hixenbaugh, ABC News, March 5, 2020), we learn that Dr. Peter Hotez of the Baylor University College of Medicine “….after years of research,… had helped develop a vaccine to protect against a deadly strain of coronavirus.” It was 2016 and they could not get any money to fund the trials with humans.

More than a decade had passed since the viral disease known as severe acute respiratory syndrome, or SARS, had spread through China, killing more than 770 people. That disease, an earlier coronavirus similar to the one now sweeping the globe, was a distant memory by the time Hotez and his team sought funding to test whether their vaccine would work in humans.

We tried like heck to see if we could get investors or grants to move this into the clinic,” said Hotez, co-director of the Center for Vaccine Development at Texas Children’s Hospital and dean of the National School of Tropical Medicine at the Baylor College of Medicine in Houston.

But we just could not generate much interest.

The reason is obvious once one considers the issue of option demands. The private sector has no interest in doing any research on something that would not be immediately needed. Thus, the federal government has to fund this research up front even if we are uncertain when–or if–the new vaccine will be needed. The article quotes Jason Schwartz, a professor at the Yale School of Public Health.

He said the global response to the coronavirus exposes broader flaws in the way medical research is funded, which he says tends to be market-driven and reactive, rather than proactive.

The only way to correct for this flaw in the market is to fully fund ongoing research BEFORE it is necessary—and only the government can do that.

Just as with deferring maintenance on bridges and tunnels, etc. failure to keep up preparedness can leave people vulnerable. Right now, as pharmaceutical companies, universities, the CDC and other research centers scramble to come up with a vaccine, the lack of preparedness will cost lives. With enough deferring of general maintenance, bridges suddenly fall down and tunnels cave in.    We in the United States find ourselves months after the emergence of the global threat of Coronavirus with not enough hazmat suits for health care workers, no protocols in place for how to deal with potentially infected people, not enough testing kits available. In addition to the long run failures indicated by the article about the missed opportunity back in 2016, we learn from the most recent whistleblower complaint that many health care workers were put at risk due to bad planning by the underfunded CDC.

The failure to pursue human trials in 2016 and the failure to respond rapidly to the emergence of the virus in January is the tragedy of the view—perpetrated by too many of my fellow economists—that government spending is almost always a waste of money. Thus, instead of viewing spending by the CDC as an essential way of protecting our fellow citizens from an epidemic, too many people believe it just goes to line the pockets of health care workers and pay high salaries to government bureaucrats.

[I actually saw an on line comment on an article about CDC funding where the individual responded that “of course” health care workers want larger appropriations because they make money from them–implicitly assuming that no good work is done with this money.]

Once again it is important to note that in this instance, Trump is behaving like a traditional Republican by perpetrating the pro-austerity nonsense. Right wingers from Reagan to the present—together with scared Democrats who bought into the austerity garbage—have brought us to this pass.  Spend money on defense and law enforcement and cut the rest to the bone. (And the failure to fully test the potential Coronavirus vaccine years ago can hardly be blamed on Trump.)

[Howard Sherman, Paul Sherman’s and my textbook, Principles of Macroeconomics, Activist vs. Austerity Policies (Routledge, 2019) takes on this topic head on. The most detailed investigation of this in chapters 24 and 25 but there is also a discussion of austerity in Europe in chapter 20. In chapter 18 there is a brief discussion of how the Obama recovery from the Great Recession of 2007-2009 was slowed by a turn towards austerity in the federal budget in 2014.]

In the context of the Coronavirus, it is not hyperbole to assert that people will die because of this country’s romance with austerity. Congress has just passed an $8 billion supplemental, and hopefully that will be sufficient to fully fund the needs of the CDC and local health authorities to combat this new plague.  But sadly, even if the amount of money appropriated turns out to be is enough, for many of the sick and dying it will have come much too late.