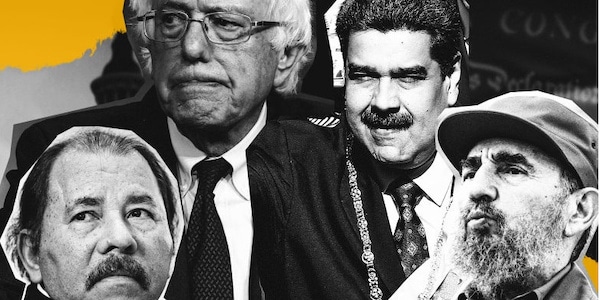 Slate photo illustration for the article “Sanders Has a Soft Spot for Latin American Strongmen” (2/20/19).

When 60 Minutes (2/24/20) asked Sen. Bernie Sanders about his past support for aspects of Cuba’s socialist revolution, as well as for Nicaragua’s 1979–90 leftist Sandinista government, Sanders responded by saying he opposes what he described as the “authoritarian” features of the Cuban government, while noting that after the 1959 revolution,  Cuba launched “a massive literacy program. Is that a bad thing?”

News organizations seemed unable to process that a major national political figure could say something positive about a socialist country, leaving these outlets flailing around in absurd ways. 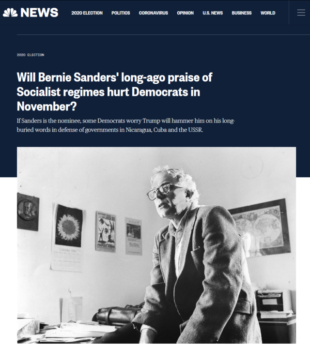 NBC (2/21/20) worried that Bernie Sanders’ “affinity for revolutionary movements” might mean that the “number of targeted killings of terror suspects would fall if he were president.”

During a town hall, CNN’s Chris Cuomo (2/24/20) asked Sanders to respond to “the Democrats who say you don’t say good things about Fidel Castro, he destroyed freedoms in that country.” The revolution did not “destroy freedoms” in Cuba: The ruler it overthrew, Fulgencio Batista, ran what the U.S. Library of Congress (4/01) called a “corrupt and brutal dictatorship,” under whose rule there were 20,000 political killings.

In the New York Times (2/27/20), David Brooks criticized Sanders because he “excused the Nicaraguan communists when they took away the civil liberties of their citizens.” Yet there were few “civil liberties” for the Sandinistas—the “Nicaraguan communists” to whom Brooks refers—to take away. The Somoza dictatorship, which the Sandinistas overthrew in a popular revolution, was one of “chronic repression” (New York Times, 2/26/78). According to the Latin American Studies Association (LASA) (11/19/84), Somoza left the country with “no democratic tradition,” instead bequeathing a legacy of “militarized politics with rampant human rights violations,” so that the 1984 election that the Sandinistas held—and won fairly, according to the British observer—was the “first experience with participatory democracy” for most Nicaraguans.

Even before the current Cuba kerfuffle, NBC (2/21/20) criticized Sanders because “he denounced what he called a ‘coup’ against Bolivia’s leftist president, Evo Morales, despite findings by independent groups that Morales tried to steal an election.” Less than a week later, the Washington Post (2/27/20) published a report from researchers at the MIT Election Data and Science Lab, saying, “As specialists in election integrity, we find that the statistical evidence does not support the claim of fraud in Bolivia’s October election.” The report bolsters critiques that were made immediately after the (yes) coup (FAIR.org, 11/18/19) that there was no compelling evidence that Morales tried to steal the election. The “independent group” cited in the article the Post linked to, notably, gets 60% of its funding from the U.S. government.

Forced to broadcast qualified praise for some elements of Latin American socialism, several outlets took refuge in the most over-the-top rhetoric  imaginable. MSNBC’s Joe Scarborough (2/25/20), for example, listed the Sandinistas and Cuba’s revolutionary government as being “some of the most murderous regimes in the history of our planet.”

The “murderous” Sandinistas conducted “sanitation campaigns, health education, occupational health and safety, and nutrition programs” that LASA found to “have significantly reduced the incidence of communicable diseases, malnutrition and infant mortality.” LASA went on to say that

even though real money wages have not risen appreciably, access to government-subsidized foodstuffs and other products through the basic-commodity rationing system has helped to raise living standards for the bulk of the population.

In Cuba, before 1959,”the greater part of the population had access only to…underfunded, low-quality, public healthcare services,” reported the International Journal of Health Services (2/05); “in rural areas, many people had never seen a doctor.” By 1975, there were“56 rural hospitals and numerous rural medical posts” (Library of Congress, 4/01). It went on to create a health system that, according to the World Health Organization (5/08), is “by many standards one of the world’s most effective.” According to the CIA World Fact Book, Cuba has a lower rate of infant mortality than the United States.

The Nicaraguan and Cuban socialists evidently decided that the best way to murder people was to make them healthier.

The Times’ Brooks said that “every day we find more old quotes from Sanders apologizing for” a “slave regime” such as “Cuba or Nicaragua.” What Brooks called a “slave regime” in Nicaragua was characterized by, as LASA documented, agrarian reform that involved nationalizing the extensive landholdings of the Somoza family and some of its associates, giving nearly two-thirds of these to individual peasants and some 15% to cooperatives, moves that help explain why these campesinos were “staunch supporters of the government”; the remainder of the nationalized land went to government-owned firms, where workers “enjoy[ed] mechanisms for participation in the management of such enterprises.” Brooks did not explain how redistributing land to the poor is akin to owning humans as chattel.

The Sandinistas also carried out a mass literacy campaign that won Nicaragua two awards from UNESCO, which said of the educational initiative:

The illiteracy rate was brought down in five months from 50% to 12%. The National Literacy Crusade is the greatest educational and cultural achievement in the history of Nicaragua. It was a major experience for the young from the cities who taught people to read and, at the same time, discovered the other half of the country with its conditions of neglect and poverty bequeathed by 50 years of dictatorship.

With its massive, participatory and united character, the Crusade became a unique national and international experiment that won the recognition of UNESCO.

As for the “slave regime” in revolutionary Cuba, the United Nations Development Programme (UNDP) places the country in the “high human development” category. This refers to the Human Development Index, which aggregates key benchmarks for health, longevity, knowledge and  standard of living. The UNDP says Cuba is above average for the countries in the high human development group, and above average for countries in Latin America and the Caribbean.

A 2016 University of Chicago study of public opinion inside Cuba asked respondents “about how things are going in their life in general”; 57% said they were very or somewhat happy, while 11% said they were somewhat or very unhappy. Cubans were also asked, “Generally speaking, would you say that things in [Cuba] are headed in the right direction or the wrong direction?”; 53% said right and 36% said wrong. 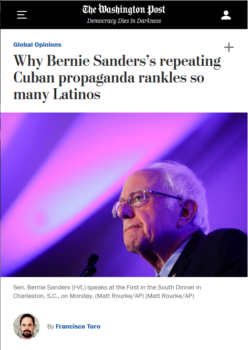 Not to be outdone by Brooks’ slavery analogy, Francisco Toro of the Washington Post (2/25/20) said of Sanders’ identification as a democratic socialist:

The bottom line is that when you associate yourself with an ideology whose past contains some of history’s worst crimes, you take on a special duty to denounce. When those denunciations come hedged with qualifiers that rest on propaganda lines, they ring entirely hollow.

Germans get this. Angela Merkel’s party, the conservative Christian Democratic Union, always understood that if you’re going to stand even half an inch to the right of center in the country that Hitler once ran, you must go to very great lengths to put distance between yourself and anything even vaguely reminiscent of Nazism. Which is one reason the center-right in Germany is one of the most doggedly pro-democracy forces in Europe.

Sanders needs to understand he’s in a similar position.

To suggest that the Cuban government is as bad as the Nazis is, of course, to say the Nazis were no worse than Cuba—a creepy position in any case, but particularly offensive in a critique of a politician whose family was largely wiped out in the Holocaust.

There are no documented cases of Cuba carrying out the death penalty since 2003, and nobody in the country is known to be facing a death sentence. Forget Hitler: The United States has executed 328 people since 2010—22 last year and four in just the first two months of this year—while 2,654 people are currently on death row in the United States.

Toro’s piece focuses on his concern that Sanders is apparently “parrot[ing] Fidel’s propaganda.” That’s an interesting choice of word, because Toro is a professional propagandist: He is the “chief content officer of the Group of 50,” an outfit with a vested interest in promoting capitalism and discrediting socialism in any form; the organization describes itself as “composed of a select group of business leaders” and

a top forum for Latin America’s most influential business leaders to explore the latest trends in world affairs as well as an opportunity for them to hear from their peers in other countries and industries.

The Group of 50 has partnerships with the plutocratic World Economic Forum and with the Inter-American Development Bank, which the U.S. dominates, and which the Intercept(4/18/19) found to be circulating a plan to infuse Cuba’s crucial Venezuelan ally with $48 billion in capital, but only following the hoped-for U.S.-backed overthrow of Venezuela’s government.

Being part of such networks goes a long way to explaining how one ends up claiming there are parallels between Cuba and Nazi Germany. 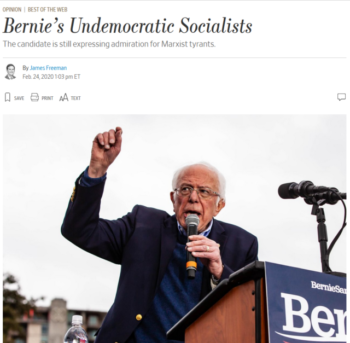 James Freeman (Wall Street Journal, 2/24/20) devotes an entire column to asserting that Bernie Sanders has “a long history of support for the most undemocratic of socialists”—without bothering to dig up any quotes to document that claim.

Not that Toro’s assertions are unique. Bret Stephens of the New York Times (2/28/20) suggested that Cuba and the Sandinistas are among “the vilest regimes in history.” The Wall Street Journal’s James Freeman (2/24/20) denounced Sanders’ praise for “tyrants” and “brutal regimes,” or, as Casey Michel said of Cuba in the New Republic (2/25/20), “enduring despotism.” Incarceration rates are a standard measure of tyranny, brutality and despotism, and it happens that the U.S. has more people in jail per capita than any other country: 655 per 100,000 for the U.S., 510 for Cuba, and 332 for the present incarnation of the Sandinistas, just over half of the figure for the U.S.

The New Republic’s Michel also lent ideological cover to 60 years of often violent U.S. attacks on Cuba, alleging—in part on the basis of an unproven, extremely dubious claim that $900 million of Cuba’s national wealth was Fidel Castro’s personal ATM—that Cuban government policies “have immiserated an entire island,” supposedly turning the country into “an economic basket case.” Jaw-droppingly, he did so without mentioning the U.S.’s economic blockade that, according to the UN, has cost Cuba $130 billion.

U.S. violence against Cuba, economic and otherwise, brings us to another important consideration for assessing who are “some of the most murderous regimes in the history of our planet” or “some of the vilest regimes in history,” or who exhibits the “blood-soaked brutalism” that Michel ascribed to Cuba: how states conduct themselves outside of their borders. To cite only a few grotesque examples, the United States visited the horrors of the Earth upon Indochina; was behind the deaths of hundreds of thousands as it prosecuted a vicious war against the Sandinistas and other liberation movements in Central America; caused the deaths of up to a million in Iraq (FAIR.org, 2/21/20); and is currently helping starve Yemen while levying sanctions against Iran that are enabling the spread of coronavirus in the country. Cuba, by contrast, played a crucial role in liberating multiple African countries, while sending doctors and teachers around the world to help many of the planet’s least well-off.

Rather than denouncing Bernie Sanders for noting the accomplishments of Latin American socialists whom the American media deems too authoritarian, a far more urgent task for reporters covering the U.S. election cycle would be asking candidates how they plan to combat U.S. authoritarianism at home and abroad, and questioning why the accomplishments of Latin American socialism aren’t possible in the United States.