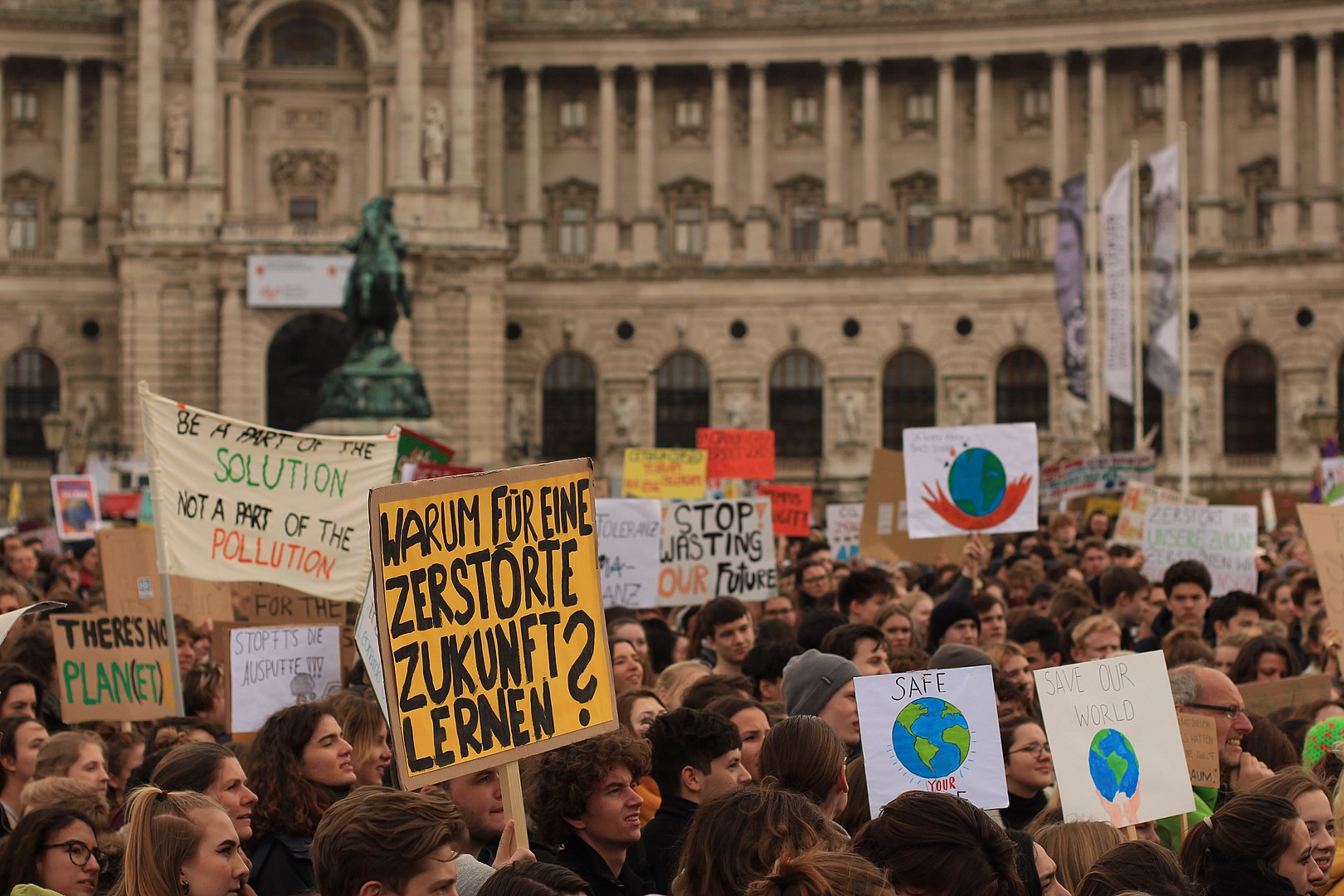 School strike for climate (FridaysForFuture) on Heldenplatz in Vienna (Austria) on March 15 2019.

If you’re in and around central Europe, the gravity of the COVID-19 crisis has set in with dramatic force. Living in Austria as an immigrant and watching as the entire country came to a stand-still in less than a week’s time really exaggerates the dystopian nature of the present moment. Day-to-day changes and terrifying reports of the Coronavirus’s outbreak from the western states (mainly Tyrol) have assured that no one leaves their homes without a good reason, and that even big cities like Vienna resemble desolate, empty wastelands.

One crucial moment that occurred in the second week of March 2020, with large-scale shutdowns throughout Austria, was the government’s insistence that everyone prioritize human life and safety over economics and profit (contrast this with the response from the UK and the US). Businesses needn’t take drastic actions out of fear since, as chancellor Sebastian Kurz announced, the government is offering a ‘crisis fund’ with bridge loans and credit guarantees to keep companies afloat. It would seem, then, only a practice reserved for cartoonish villains to use this pandemic to place workers in bureaucratic limbo and to hold their wages hostage, all while people everywhere are taking concerted efforts to protect themselves and their families from contracting a deadly virus.

Yet, no such ghoulish evil seems beneath one of Austria’s best-known millionaires, Attila Doğudan, CEO of DO&CO, one of the largest culinary companies in Austria, and who employs over 11,000 people worldwide, while providing catering to airline and train passengers everywhere. At present, the workers at DO&CO are in the midst of a bloody labor dispute, lacking any clarity about what their lives will be like once the Coronavirus crisis subsides.

When you’re employed by any of the restaurants, cafes, or bakeries in Austria, you’re immediately plugged into the specialized unions (Kollektivvertrag); and a series of hard-won protections exist so that all workers are guaranteed paid sick leave, insurance, adequate wages, a worker’s council (Betriebsrat), and (if you’re lucky) fixed-hour contracts.

These provisions, one would think, make it exceedingly difficult to coordinate a scorched earth displacement of one’s entire labor force. But in times of exhaustion and uncertainty, and when people cannot even leave their homes (let alone stage a protest or organize an effective strike), these things tend to proceed unabated.

Despite the country’s labor protections, Doğudan has used the COVID-19 crisis to orchestrate a widespread layoff campaign against all restaurant employees within Austria. Approximately 800 people employed at all of the DO&CO restaurants received a shocking e-mail in the second week of March 2020 from Doğudan himself explaining that, due to expected loss in profits and the uncertainty of being able to sustain the company’s overhead, he had no other choice. As a result, employees who were employed at the beginning of the week found themselves at the end of the week registered with Austria’s Public Employment Service (Arbeitsmarktservice).

So they’re not officially jobless yet; but, they’re currently in bureaucratic, furlough limbo, and fast realizing how disposable they are. Workers have since been forced to use any remaining overtime pay in order to feed themselves over the past month while they negotiate for a restricted work agreement.

Such a dramatic move did not sit well with labor organizers in Austria, especially the Austrian Trade Union Confederation (Österreichischer Gewerkschaftsbund). Describing Doğudan’s actions as “unsozial” (“anti-social”), Berend Tusch, the head of the tourism union in Austria scolded Doğudan in an open letter to Austria’s news agency, APA, for abandoning his own workers “without even batting an eye”. Doğudan’s actions, Tusch said, were taken without any consultation with the trade unions or worker’s council’s; and they betray a stunning, opportunistic, and cynical exploitation of a crisis.

Tusch’s use of the term unsozial to attack Doğudan says something significant about Austria’s ideological landscape as a whole. I’m originally from the U.S. where we would use “anti-social” to pathologize or isolate someone for being maladjusted or for not playing well with others. I’ve learned that, here in Austria, unsozial is used to condemn someone who doesn’t fulfill the norms set by Social Democracy—liberal humanist norms that try to rein in the grotesque inequalities of capitalism by injecting values of moral cohesion, conviviality and sociality, all while still maintaining the asymmetrical capitalist exchange relations.

The valorization of sozial capitalists reflects what Karl Marx and Friedrich Engels famously called “bourgeois socialism”: “The Socialistic bourgeois want all the advantages of modern social conditions without the struggles and dangers necessarily resulting therefrom”.

The orthodox left in Europe—since the 1920s with Karl Liebknecht, Rosa Luxembourg, and (in Austria) Ernst Fischer—approach this type of timid moralizing with suspicion, and instead direct their focus toward the contradictions and moral indifference of capital.

Austria has a lot of catching up to do and reckoning with its racial divisions and anti-immigrant hostility, along with its stubbornly conservative social attitudes (indoor smoking was only outlawed in 2019). Furthermore, the government’s slow response and criminal negligence at the initial outbreak in Tyrol will leave lasting damage on Austrians’ ability to trust leadership. Nevertheless, after the Second World War, institutions throughout Austria and around Europe are built, it seems, to withstand crisis. The social democratic structures in place can be traced back to the post-War era and the economic policies achieved and advanced up to the early 1970s. Of course, the foundation of the welfare state was laid way back at the end of the nineteenth century, but achieved considerable expansion with the emergence of the Second Republic.

During these times of crisis, we know that, as Bernie Sanders is reminding us, now is the time for solidarity. Similar sentiments are echoed here in Europe, even with the sweeping lockdowns and border closures that were implemented shortly after the World Health Organization deemed Europe the “epicenter of the pandemic” (this status has since been conferred upon the U.S.). Nevertheless, calling Doğudan unsozial lets the capitalist class off the hook. He has revealed himself to be no exception to the barbarity characterizing the capitalist class. One hopes that the public shame would be enough for him to reverse course when things return to normal—but I have my doubts.

As I’m writing this, a shred of optimism may come from the fact that the well-established and empowered unions here in Austria are organizing against and challenging Doğudan’s actions. But a series of sad text messages shared between servers and cooks at the various DO&CO restaurants—including its famous Demel bakery in Vienna—reveal an exhaustion and disaffection among the workers, resigned to a crushing defeat during a time when uncertainty and anxiety are in the air. Even with a robust union presence, the fight for workers’ rights is an uphill battle.

Kevin Potter is a junior lecturer and PhD student in the Department of English and American Studies at the University of Vienna. He is originally from the U.S., but has lived in Europe since 2013. His Twitter handle is @kevinmpotter.