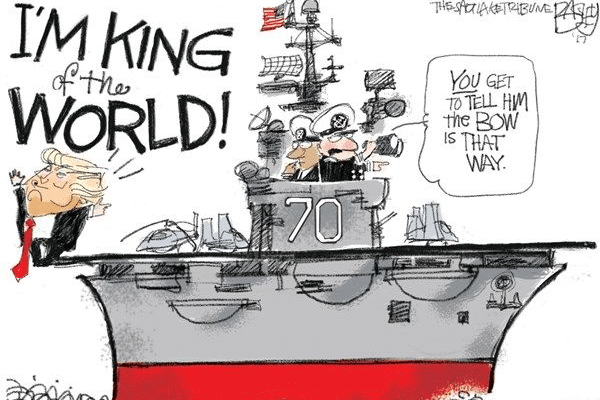 On April’s Fools Day, U.S. President Donald Trump gave a press conference where he announced a new “counter-narcotics effort” by U.S. Southern Command. “We’re deploying additional Navy destroyers, combat ships, aircrafts and helicopters, Coast Guard cutters…doubling our capabilities in the region,” he said. The point of this mission—which will be joined by other countries—is to “increase surveillance, disruption, and seizures of drug shipments.” “We must not let narco-terrorists exploit the pandemic to threaten American lives.”

On 26 March, less than a week before Trump’s announcement, the U.S. Department of Justice indicted several members of the Venezuelan government for narco-trafficking. An indictment is not a verdict of guilt, merely a note—in this case–prepared by the U.S. government against an adversary; there is nothing in the indictment that proves the case that any of the individuals mentioned in it have anything to do with narcotics smuggling. It was apparent from the press conference at the U.S. Department of Justice that this was political theatre, an attempt to further delegitimize the government of Nicolas Maduro.

Coming less than a week after this indictment, it is clear to all that the point is not to actually disrupt the cocaine trade, but it is to put pressure on Venezuela. No evidence was provided during the Department of Justice press conference when the United States charged Maduro with narco-trafficking, and no evidence was presented at Trump’s press conference when he announced that a naval carrier group would enter the Caribbean. There was no evidence presented at either high-profile event, because no evidence is either available or necessary; it is not available, because even the U.S. government’s own agencies say that Venezuela is neither the originator of narcotics nor the trafficker of narcotics, and it is not necessary because the United States has been consistently delegitimizing Venezuela to overthrow the government based on increasingly hallucinatory stories about the Venezuelan government.

The Primary Source of Cocaine

In December 2019, the U.S. Drug Enforcement Agency (DEA) released its National Drug Threat Assessment. This study offers the most detailed look at the movement of drugs into the United States. At several points in the study, the DEA says that Colombia is the “primary source for cocaine seized in the United States,” According to the DEA’s Cocaine Signature Program, in 2018 “approximately 90 percent of cocaine samples tested were of Colombian origin, six percent were of Peruvian origin, and four percent were of Unknown origin.” As far as the U.S. government’s own drug agency is concerned, there is no cocaine or any other narcotic that comes from Venezuela.

Both at the U.S. Department of Justice press conference and at Trump’s press conference, maps were shown that indicated cocaine traffic from Venezuela to the United States. This is simply not true, based on U.S. DEA information. “The majority of the cocaine and heroin produced and exported by Colombian TCOs [Transnational Criminal Organizations] to the United States is transported through Central America and Mexico,” write the DEA officials in their 2019 report. However, there are suggestions in the report that Colombian narco-traffickers sometimes “store large quantities of cocaine in remote areas of Venezuela and Ecuador until maritime or aerial transportation can be secured.” It is important to recognize that the cocaine and heroin are hidden in “remote areas” of Colombia’s neighbors, with Colombia being the focus of the entire drug trade.

At no point in the entire DEA document, and in documents from previous years, do the U.S. drug officials make any statement that implicates the Venezuelan government in either the production, storage or transportation of the cocaine and the heroin. The only time Venezuela enters the picture is when Colombian narco-traffickers hide their cocaine and heroin in “remote areas” of Venezuela before they traffic them into Central America and Mexico and then onwards to the United States.

The indictment against Venezuelan officials is bizarre. There is no footprint for it in any DEA document that is available.

There is, however, significant evidence—as presented by the Colombian journalist Gonzalo Guillén in La Nueva Prensa on 3 March 2020—that Colombia’s president Iván Duque and his patron, the former president Álvaro Uribe had close ties with the narco-trafficker José Guillermo Hernández Aponte, alias Ñeñé. The previous day, Duque was in the Oval Office as Trump chided him for not doing enough to eradicate cocaine production in Colombia. “Well, you’re going to have to spray,” Trump told Duque. “If you don’t spray, you’re not going to get rid of them. So, you have to spray, with regard to the drugs in Colombia. Yeah.” Trump was talking about glyphosate-based fumigation, which the government of Colombia stopped doing in 2015 because the World Health Organization said that such sprays caused cancer. Duque said he will restart spraying. There was no mention of the accusations that Duque himself is linked to the narco-traffickers; since he is pliant towards Washington, his own alleged crimes do not amount to much.

Strangely, in that press conference, both Trump and Duque talked about Venezuela, but neither of them mentioned drugs or narco-trafficking. It was all about regime change.

On 31 March, U.S. Secretary of State Mike Pompeo announced that Venezuela must have a transitional government; this itself is bizarre because Pompeo is neither Venezuelan nor a United Nations official and yet he felt emboldened to speak for the Venezuelan people. His plan—Democratic Framework for Venezuela—called upon President Maduro to resign and for Washington’s favored replacement Juan Guaidó to renounce his imaginary claim to power. Members of the four main parties—including Maduro’s Socialist Party—would form a council and be led by an “interim president.” If this plan is accepted, Washington would lift its unilateral coercive sanctions that it had imposed from 2014.

The previous weekend, Guaidó announced on twitter that Venezuela needed an Emergency Government that had the participation of all parties and would govern until new elections could be held. After Pompeo’s announcement, Guaidó took credit for it and thanked Pompeo publicly. Other far-right politicians, such as Leopoldo López, Carlos Vecchio, and Julio Borges, saluted Pompeo’s plan and thanked the United States for “backing” Guaidó’s Emergency Government.

The Organization of American States, which had behaved as the long-arm of the U.S. State Department during the coup against the government of Evo Morales in Bolivia, joined in the chorus begun by Pompeo and Guidó. In a statement, the OAS declared that it “considers that the plan presented constitutes a valid proposal for a path to end the usurping dictatorship and restore democracy in the country.”

The Venezuelan government led by President Maduro rejected the plan. But it was not alone. His opponent in the 2018 presidential election, Henri Falcon of Avanzada Progresista, also rejected the Pompeo-Guidó plan and the deployment of U.S. warships off the Venezuelan coast. The removal of Maduro, he wrote, “is a process and not an imposition; it requires agreements between adversaries for it to be successful. The solution in Venezuela is between Venezuelans.” In other words, Pompeo and Trump had no role in the stabilization of Venezuela. “The pandemic,” he wrote, “is wreaking havoc in the world. Venezuela is one of the most vulnerable. It would be humanitarian and very great if ships came with aid and medicine, and it would be very inhumane if they came loaded with weapons and threats.”

Falcon is not alone. Most of the opposition in Venezuela did not approve of Guidó’s submission to Trump and Pompeo. Claudio Fermin of the Soluciones Party attacked the “irresponsible and fanciful thesis” of Guidó and his supporters, which is reliant upon the “fantasy cloud of instructions sent to them by their bosses Elliot Abrams, Pompeo, and Trump.” Henrique Capriles Radonsky, who twice ran unsuccessfully to be president, said that Maduro has “internal control” while Guidó’s people have “international alliances.”

When she heard that gunboats are coming towards the Venezuelan coast, Maria Corina Machado of the Vente Venezuela Party tweeted, “That’s the way to build a credible threat.” It is credible because the gunboats have done this before.

So much of this is déjà vu. On 7 October 1963, U.S. President John F. Kennedy gathered his advisors in the White House to discuss how to overthrow the democratically elected government of João Goulart in Brazil. Kennedy asked frankly, “Do you see a situation coming where we might be—find it desirable to intervene militarily ourselves?” His Ambassador in Brazil Lincoln Gordon said that he had worked on a plan with U.S. Southern Command—then based in Panama—and with his contacts in the Brazilian military. A U.S. invasion, Gordon told Kennedy, would require a “massive military operation,” which “all depends on what the Brazilian military do.” Any coup without major military support would lead to “what would amount to a civil war.”

Rather than risk a civil war, Gordon said the military had to act, and the United States had to provide them with diplomatic and military support. By March 1964, Gordon said that the “most significant development is the crystallizing of a military resistance group under the leadership of General Humberto Castello Branco.” Washington gave the green light. Operation Brother Sam was put in motion, which included egging on the Generals and sending a massive naval task force to sit off the coast of southern Brazil. An aircraft carrier, two guided missile destroyers, and other support vessels left Aruba and made their very public journey to Brazil. General Castello Branco moved against Goulart; that coup created a military dictatorship—backed by Washington—that lasted 21 years.

The U.S. carrier group that is now sailing towards Venezuela seems to be mimicking Operation Brother Sam of 1964. Rather than focus attention on the pressing problem of controlling the virus in the United States and amongst its military forces, Trump has begun maneuvers that could very well lead to a serious and dangerous clash in the Caribbean Sea.