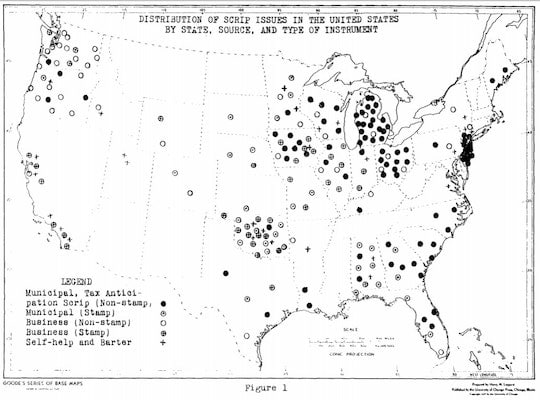 Over the past week it has come into focus for policymakers just how much strain state and local government budgets are under. They have to make emergency healthcare expenditures among other emergency expenditures, expand unemployment insurance with very low levels of reserves in unemployment insurance funds and do this while tax revenues fall off a cliff since incomes and sales have collapsed. The CARES act provides 340 billion all together with 80% or so going to financing  Coronavirus-related expenditures. 150 billion of which is direct aid to state and local governments. Given the scale of the crisis, this is far from adequate. If you assume that states need roughly 3000 dollars per person in their state (which is a reasonable assumption given the average sales and/or income decline across the country and how much more could happen) that would amount to just under a trillion dollars. Clearly that is not forthcoming (yet). It is really hard to underestimate the strain state and local finances are under. And will increasingly be under. The Center on Budget and Policy Priorities has an excellent table showing what collapses in tax revenues a collection of states (so not even including local governments) are already projecting now, while we’re still very early into this crisis. 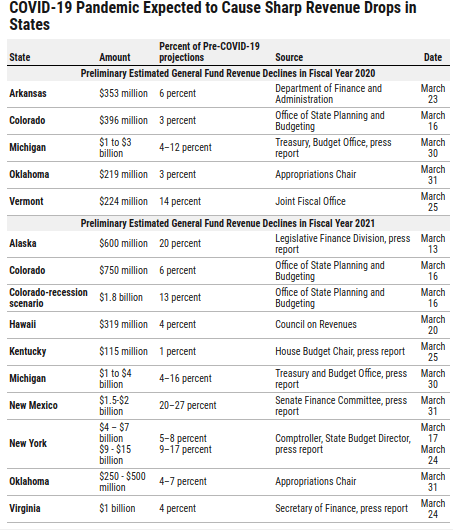 In the midst of all this, there is a lot of talk about the Federal Reserve “helping out”. As I mentioned last week, it is likely that the Federal Reserve will be launching a municipal bond buying program through a special purpose vehicle. In addition, there are democratic legislative proposals that are discussing requiring the federal reserve to make state, local and territory bond buying purchases.

Maxine Waters’s financial services committee in the house put out a set of proposals on March 18th that included this section:

This provision would authorize a program that requires the Federal Reserve to support state, territory, and local debt issuance in response to the coronavirus outbreak given the critical role these governments are playing

Five days later congresswoman Rashida Tlaib introduced “H.R.6328 —To authorize Federal reserve banks to purchase COVID-19 related municipal issuances, and for other purposes.” While text for this bill isn’t public, the rumor is that early drafts of the bill authorized emergency purchases on state and local government securities up to 5 years maturity and requires the federal reserve to make purchases until interest rates on these securities equaled the federal funds rate. They also have clawback provisions in case of misuse of funds or inappropriate expenditures by state and local governments.

Who knows how that bill will evolve (or if it will be scrapped in favor of another bill) but it is interesting nonetheless and is a barometer of where thinking in this crisis is. What’s most intriguing is the importance attached to the maturity of authorized purchases. It is clearly widely believed that there is limited support the Federal Reserve can provide absent Special Purchase Vehicle fueled emergency purchases under 13.3. Remember that, as we briefly discussed last Friday, the Federal Reserve is authorized to purchase short maturity state and local government debt directly from state and local governments. The problem is that local governments don’t like to issue short maturity debt, and what happens when the Fed stops providing support?

An easy solution to this is to issue debt with little interest rate uncertainty—small denomination tax receivable IOUs. Since people can pay their taxes, fines, fees and utility bills with them (note, make sure to require investor-owned utilities to make them receivable) there is always a demand for them that there isn’t for conventional municipal debt. If I can save 1% on my tax bill by buying these IOUs off your hands, that’s worth it to me. In fact, this is how local governments responded to the great depression as well. In other words, they dealt with their issues by creating money (I’ll write about the legal issues involved in the next couple of weeks). Some did this well, some did this poorly but universally this was seen as the only way to respond to the fiscal crisis at the state and local level. Bear with me a bit, as we go down the rabbit hole…

All sorts of local monetary experiments were extremely widespread during the Great Depression, as this 1948 dissertation’s map shows:

The tax receivable IOUs (referred to legally as “Tax Anticipation Notes”) were the most successful of these experiments and especially common in New Jersey and Michigan. Hence, why I own Atlantic City and Detroit notes: 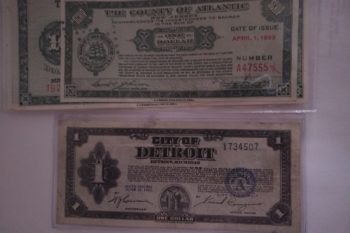 Yes, these issuances were acts of desperation. They were also effective and by far the most effective monetary tool state and local governments had to “support themselves”. See for example this issue of Moody’s from August 9th, 1933 : 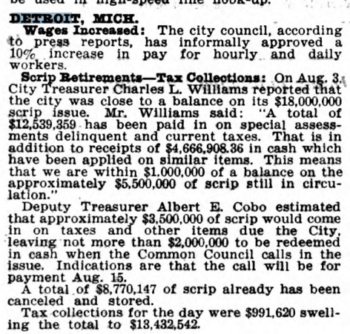 Granted that this was four or so months into the new deal, it still is primarily because of the power of this legal tool itself. Since you can directly settle your local tax obligation in this kind of IOU, tax delinquencies that normally rise sharply in deep recessions and depressions don’t rise since individuals can at the very least provide something of value in exchange for small denomination Tax Anticipation Notes (TANs). These tools don’t cure depressions by any means—people still have U.S. dollar denominated debts and purchases from inter-regional suppliers to make that these aren’t usable for—but they secure local state finances and prevent cuts that would make things worse. For more on this, read Loren Gatch’s excellent paper on the topic. The Federal Reserve can make these local currencies even more attractive tools.

At the risk of making it seem like central bank swap lines are the solution to every problem, a swap line for local and state governments is the perfect tool using the Federal Reserve’s existing legal authority and can facilitate supporting these local currencies. It immediately puts a stop to spending cuts and ensures they can focus on focusing on the task at hand—coordinating resources to fight the public health crisis. If the Fed is concerned with “fiscal irresponsibility”, it can make spending growth caps (as well as no tax cuts) a condition of having access to a swap line. In the longer term, having a developed infrastructure for issuing local currencies which the Fed interacted with as a normal part of its operating procedures would give the Fed a powerful new tool for implementing its maximum employment mandate and make state and local government finances more resilient towards crises.