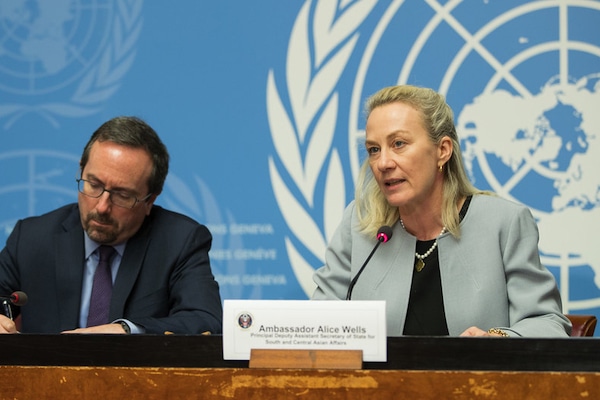 The principal deputy assistant secretary at the Bureau of South and Central Asian Affairs (SCA) in the U.S. State Department, Alice Wells, dropped a bombshell on the Afghan government and the country’s political elites on April 4—and caught the international donors by surprise, too—by linking all aid to Afghanistan to the formation of an inclusive government in Kabul.

In a tweet from the SCA account, Wells wrote in a threatening tone: “It can’t be business as usual for international donors in #Afghanistan. International aid requires partnership with an inclusive government and we all must hold Afghan leaders accountable to agree on a governing arrangement.”

Prima facie, it is a call by Washington to the international community to join the recent move, announced on March 23 by Secretary of State Mike Pompeo, to cut back aid to Afghanistan by $1 billion and to reduce the aid by another billion dollars in 2021 as well as to initiate a review of all U.S.-aided programs and projects in that country to identify additional reductions, and to reconsider U.S. pledges on the whole to future donor conferences for Afghanistan.

The punishing move on March 23 followed an abortive mission by Pompeo to Kabul on the same day to persuade Afghan President Ashraf Ghani and former chief executive Abdullah Abdullah to agree on an inclusive government. Pompeo’s appeals fell on deaf ears. It now seems that Washington’s threat to cut back bilateral aid also has been largely ignored by the Afghan elites.

Washington is ratcheting up the pressure on Kabul by forewarning that it will prevail upon the international community to join hands with the U.S. by making all aid to Afghanistan conditional on cooperative behavior by the Afghan political elites.

Will such hyped-up U.S. threats work? The high probability is that it won’t impress Afghan elites. As for the international community, Washington may have better luck. The U.S. has been the driving force behind marshaling international aid for Afghanistan.

Between 2002 and 2015, the U.S. and other international donors pumped about $130 billion into that country, but most of the money came from the U.S. (about $115 billion)—although more than half of it was spent on security. At the October 5, 2016, Brussels Conference on Afghanistan, the international donors pledged another $15.2 billion through the period up to 2020.

The unexpectedly high pledges in Brussels reflected a general recognition at that point that if the Taliban gained ground and/or if Afghanistan sank into greater poverty and despair, the region and the world would have a much higher price to pay. Equally, there was trust in Ghani as someone with a vision for Afghanistan whom major donors could believe in, despite the rampant corruption and political infighting, and the bloody conflict ending a huge number of Afghan lives.

Importantly, the U.S. was backing Ghani to the hilt. But four years down the line, the situation around Afghanistan has changed phenomenally. Despite all the money spent, the security situation worsened, and the Taliban is now resurgent. Afghanistan remains a basket case—one of the poorest countries on earth—with 80 percent of its budget financed by aid. The world community has come to accept that there is no alternative but to reconcile with the Taliban through negotiations and power-sharing.

Clearly, the earlier optimism, even if somewhat contrived, has been replaced by donor fatigue, and questions are being asked about where the money will end up. None of the donors believe that Afghanistan could become self-reliant in the foreseeable future.

In such a gloomy situation, Wells’ tweet taps into the pervasive donor fatigue and the Western donors might subscribe to the thinking in Washington that they “must hold Afghan leaders accountable to agree on a governing arrangement” before loosening their purse strings any further.

However, lest it be forgotten, beyond the club of Western donors, it may turn to be a different story when it comes to the regional states such as China, Russia, Iran or India. Therein lies the rub.

Indeed, no regional state aspires to replace the U.S. and other Western donors. But the point is that the regional states would have a sense of immediacy about the Afghan situation and cannot afford to take a detached view. They will willy-nilly remain engaged with the Ghani government. (In fact, Ghani is well aware of that.)

But the danger here is that as the regional states shed their reserve and get more and more involved, the competitions and rivalries between and amongst them will spill over into Afghanistan, and the country may become a theater of severe contestation where, in a cacophony of turmoil, primitivism, and savagery, a new struggle may erupt.

Does that have to be the final outcome of the 19-year-old U.S.-led war in Afghanistan? The despair and hopelessness in Washington are understandable. Zalmay Khalilzad, the special representative for Afghanistan reconciliation, has reached his limits. Neither Trump nor Pompeo has personal equations (which former Secretary of State John Kerry had in similar circumstances in 2014) with Afghan elites. Besides, Afghan elites are already beginning to look at a “post-American century.”

In such a situation, Washington should stop micromanaging Afghan politics. If the U.S. steps aside to the shade, it may help. Leave it to the Afghan elites to work out a consensus. They are quite capable of resorting to their time-honored traditions of consensus-making.

The problem at this point is that the U.S. wants to chariot the peace process to a predetermined destination with intra-Afghan talks providing a facade of negotiations. The Afghans don’t buy that approach, because, what is there in it for them?

The Brookings Institution, which is wired into the U.S. security establishment and intelligence, floated a “consensus formula” on March 25—co-authored by none other than the think tank’s president John Allen—to the effect that Kabul’s team for the intra-Afghan talks could be led on the government side by Abdullah, who, nonetheless, “would not be Ghani’s delegate… (but) as the lead negotiator—as well as lead decision-maker—on any deal with the Taliban.”

Ghani will never agree to such self-serving U.S. ideas. His recent cabinet appointments (which might well have been the immediate provocation for Alice Wells’ threatening tweet) underscore that he is “Afghanizing” his cabinet for the first time with appointees drawn from the political spectrum so that it is “inclusive”—although not in the way Washington would have liked.

The appointment of Mohammad Haneef Atmar as acting foreign minister, for instance, shows that Ghani has a game plan to sit down across the table with the Taliban with a truly representative team. The U.S. should seriously give a chance to these rites of passage in contemporary Afghan politics instead of playing a spoiler’s role. Let Khalilzad have a “time out.” He must be pretty exhausted by now.