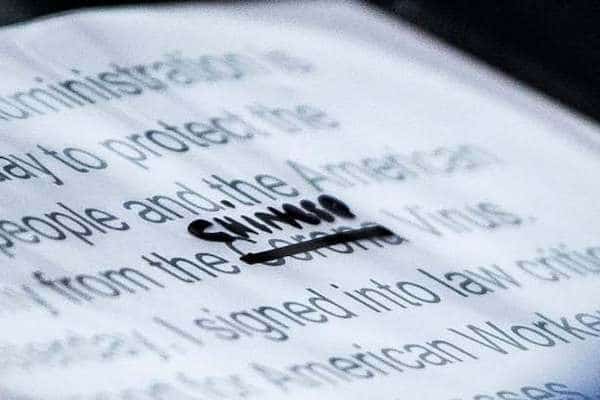 As Donald Trump and his band of “hacks and grifters” are preparing to prematurely reopen the U.S. economy, they’re also rehearsing the language they’ll use to justify their irresponsible decisions.

Here’s how Peter Navarro, the White House trade adviser, is discussing the terms of the reopening:

The unfair China trade shock that hit so many of America’s communities in the 2000s not only destroyed over five million manufacturing jobs and 70,000 factories; it killed tens of thousands of Americans, Mr. Navarro said.

He added, This new China virus shock threatens similar mortal dangers and threats to the American family that may be magnitudes larger than those triggered by the China trade shock.

Then, there was the “China trade shock,” referring to the loss of manufacturing jobs in the United States after China was admitted to the World Trade Organization in the early 2000s. Now, it’s the “China virus shock,” which poses similar economic and social problems.

It’s a language that Navarro hopes to sell to both Trump (given the president’s well-known China syndrome when it comes to both international trade and the coronavirus) and to the American people.

What Navarro and his language hide from view is the fact that the so-called China trade shock was actually initiated by U.S. manufacturing corporations that, based on the development of capitalism in China, decided to outsource production and jobs to Chinese factories and workers. That was soon followed by U.S. merchants, who were able to import the commodities they sell, at much cheaper prices, from China.

By the same token, referring to the “China virus shock” overlooks the manner U.S. corporations were allowed to respond to the government-mandated shutdowns, by furloughing and laying off tens of millions of American workers, thereby devastating them, their families, and their communities. No effort has been made to retain those workers, along with their pay and benefits. That’s the real virus shock, and it wasn’t exported from China.

We need to beware of the language that will be deployed to justify the decisions of the Trump administration and their corporate backers, on both Main Street and Wall Street, in the days and weeks ahead. It’s that language and the decisions for which they serve as cover that represent the real “mortal dangers and threats to the American family” in the midst of the COVID-19 pandemic.