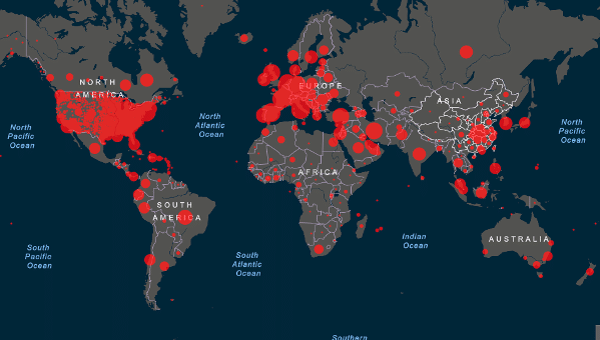 How could Karl Marx (1818–1883) help us interpret the current crisis? His theory of history offers critical resources to interpret the unprecedented crisis which is shaking the world today, while indicating at the same time that ‘the world after’ so much mentioned could only be anti-capitalist.

Before tackling the problem of links and multiple mediations between the capitalist world system and the Covid-19 pandemic, let us return first to Marx and the theoretical framework he proposed to grasp the great historical crises. In 1845-46, Marx, a political exile in Brussels, writes in The German Ideology these words which will later be taken up and will form a digest of what Friedrich Engels will call after Marx’s death “historical materialism”:

In 1859, Marx takes up this idea almost word for word in his famous “Foreword” to his Critique of Political Economy. It reads:

The extract from The German Ideology is more general in scope, while that of the “Foreword” of 1859 is more economics-oriented. First of all, it is important to emphasize that Marx tried to interpret “disasters” from the mid-1840s. From his historical and economic studies conducted in the years 1840-1844, he identified breaks in the long view of history in which a radical change takes place in the world-system. It is a dialectical change which transforms the productive forces (technology, means of communication, capital, workers, workplaces, sciences, etc.) from forces of development or progress into “forces of destruction”: they “only cause disasters.”

The Covid-19 pandemic has several aspects that are inseparable from capitalism, ranging from state policies in the face of the pandemic aimed at maintaining activity and trade, through the absence of a prevention plan, territorial health inequalities, to the unpredictable consequences of a Great World Depression. All this could indeed be the subject of analysis to show the links with capitalism.

The interest, however, of the passages quoted above is to offer an understanding in a relational or structural way of the deep causes or origins, historical one might say, of the current crisis. This has nothing to do with an accident despite the multiple random factors that may have contributed to triggering and amplifying it. To be convinced, the excellent article by Jade Lindgaard and Amélie Poinssot entitled “The coronavirus, a boomerang that comes back to us in the face” (Mediapart, March 22) allows us to sketch the essentials to remember. Several systemic processes are described in connection with the consequences that made the current pandemic possible.

In a very condensed way, we could summarize them by saying that the deforestation and the significant reduction in the biodiversity that industrial crops cause in plantations (rubber, oil palms, coffee or cacao) endanger ecosystems and favor the spread of the virus to human communities. Just as the quest for agricultural land contributes to deforestation, urbanization and incessant urban sprawl also participate in this same deforestation process, disrupting the living environments of several animal species. Finally, the globalization of exchanges, made up of massive flows and mobilities, channeled by transnational networks and polarized by world metropolises, rapidly transforms any regional epidemic into a global pandemic as we can see today in real time on the map developed by researchers at John Hopkins University in the United States. 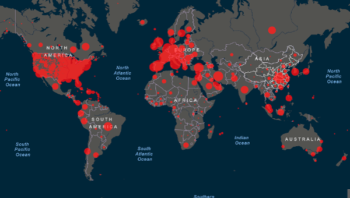 The map clearly shows that the Covid-19 is concentrated in the three world poles that dominate the capitalist world system: East Asia, Western Europe and North America. More specifically, a correlation seems to appear between the pandemic and the intensity of flows and mobilities in world metropolises.

American geographer and historian Mike Davis had previously shown the systemic links between globalized capitalism and the swine flu. Today, it is clear that the Covid-19 pandemic demonstrates that the productive forces accumulated on a world scale have become forces of destruction which plunge us into post-modern barbarism. To get out of it, we must reconnect, as many social movements do, with the radical quest for other paths than those of state and capital, to invent the unknown, beyond disaster capitalism. •

The quoted extracts come from Marx, Philosophie, edition established by Maximilien Rubel, Paris, Gallimard, 1965 and 1982, p. 390, 488-489. This article has originally been written in French and published online on the Mediapart blog on March 25th. The original version can be seen here: blogs.mediapart.fr.

Dimitris Fasfalis is a history teacher. He currently lives in Paris and has written for a number of left publications, including Socialist Voice, Links, Presse-toi à gauche, Z Mag and Europe solidaire sans frontières.