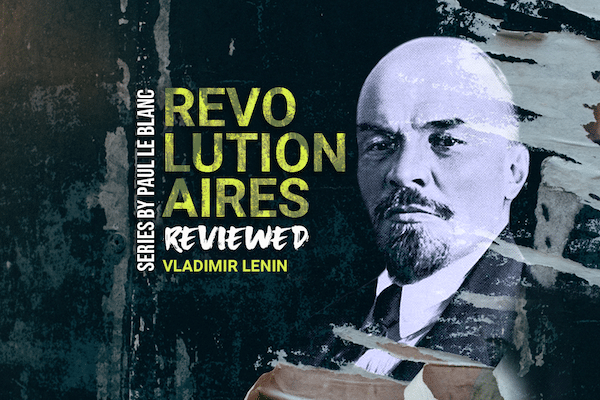 To marks the 150th anniversary of the birth of Lenin we’re sharing the latest installment of Paul LeBlanc’s series Revolutionaries Reviewed, on Vladimir Lenin–a central leader of the Russian Revolution of 1917, which overthrew tsarist rule and attempted to bring about a new socialist society.

Vladimir Ilyich Ulyanov (1870-1924) was born into a large and loving family, which enjoyed some social standing, was highly cultured, and was inclined to believe in the rights of “life, liberty, and the pursuit of happiness” for all people. Demonstrating abundant energy, humour and intelligence as a child, under the name “Lenin” he would become an incredibly effective revolutionary theorist and organiser. Because of this, he was loved by many labouring people–but has also been denounced, from his time to ours, by those embracing the status quo.

The Russian Empire in which he lived was ruled by the absolute tyranny of the Russian monarchy, the Tsars, in combination with a landowning aristocracy and a dynamically industrialising capitalism. For the enrichment of Russia’s wealthy elite, the vast labouring majority–both the growing working class in the factories and the much larger peasantry–were severely exploited and oppressed.

Lenin helped overturn this system by leading the Russian Revolution of 1917, in the name of human liberation.

His lofty goals were thwarted, but much can be learned from him by those committed not simply to talk about revolutionary change, but to actually help bring it about.

Among Lenin’s contributions are those related to organisation. Following Karl Marx’s dictum on the need for “the combination of the working-class movement and socialism,” Lenin insisted,

Our principal and fundamental task is to facilitate the political development and the political organisation of the working class.

He insisted that a serious socialist movement must reject a lackadaisical and amateurish approach: “We must train people who will devote the whole of their lives, not only their spare evenings, to the revolution.” Rather than small circles of overworked activists, he argued,

we must build up an organisation large enough to permit the introduction of a strict division of labour in the various forms of our work.

Such an organisation must “not restrict its activities to some one preconceived plan or method of political struggle.” Instead, it,

recognises all methods of struggle,” if they correspond to existing resources “and facilitate the achievement of the best results possible under the given conditions.

With this approach, a strong organisation could result. “If we have a strongly organised party, a single strike may turn into a political demonstration, into a political victory over the government,” he explained.

If we have a strongly organised party, a revolt in a single locality may grow into a victorious revolution.

Lenin believed this could be facilitated not through a rigid structure with top-down discipline, but through the development of “a serious organisation of real revolutionaries,” a “body of comrades in which complete, mutual confidence prevails” and in which all,

have a lively sense of their responsibility.

The term democratic centralism is often used to describe Lenin’s approach–all too often distorted into a rigid notion that was the opposite of what Lenin favoured. Different points of view on how to advance the revolutionary struggle were natural and necessary, and it was the responsibility of organised revolutionaries “to ensure that the ideological struggle within the Party on questions of theory and tactics is conducted as openly, widely and freely as possible,” although in manner “that on no account does … disturb or hamper the unity of revolutionary action of” of socialist-minded workers.

We are profoundly convinced that the workers’ … organisations must be united, but in these united organisations there must be wide and free discussion of Party questions, free comradely criticism and assessment of events in Party life. … We were all agreed on the principles of democratic centralism, guarantees for the rights of all minorities and for all loyal opposition, on the autonomy of every Party organisation, on recognising that all Party functionaries must be elected, accountable to the Party and subject to recall.

Tribune of the People

Another sharp division between the Bolsheviks and the Mensheviks revolved around which class the workers should be allied with in the struggle against Tsarism. The Mensheviks felt the obvious allies were pro-capitalist liberals, while Lenin and his co-thinkers argued that the workers could not afford to trust pro-capitalist liberals, opting instead for a more radical worker-peasant alliance.

Lenin also rejected an exclusive focus on a narrowly conceptualised working class, insisting that revolutionary socialists must give attention,

He particularly objected to so-called Marxists who prioritised economic and workplace struggles. The ideal of serious socialists,

should not be the trade union secretary, but the tribune of the people, who is able to react to every manifestation of tyranny and oppression, no matter where it appears, no matter what stratum or class of the people it affects.

An activist wanting to replace capitalism with a workers’ democracy and build a socialist future must be,

able to generalise all these manifestations and produce a single picture of police violence and capitalist exploitation.

take advantage of every event, however small, in order to set forth before all … socialist convictions and … democratic demands, in order to clarify for all and everyone the world-historic significance of the struggle for the emancipation of the proletariat.

These aspects of Lenin’s approach dovetailed with the global dimensions of his strategic orientation: opposing imperialism and advancing democracy everywhere.

Imperialism means the progressively mounting oppression of the nations of the world by a handful of Great Powers. It means a period of wars between the latter to extend and consolidate the oppression of nations; it means a period in which the masses of the people are deceived by hypocritical social-patriots, i.e., individuals who, under the pretext of the ‘freedom of nations’, ‘the right of nations to self-determination’, and ‘defence of the fatherland’, justify and defend the oppression of the majority of the world’s nations by the Great Powers.

This approach was intimately intertwined with the general struggle for genuine democracy, which Lenin saw as inseparable from socialist revolution:

The proletariat cannot be victorious except through democracy, i.e., by giving full effect to democracy and by linking with each step of its struggle democratic demands formulated in the most resolute terms… We must combine the revolutionary struggle against capitalism with a revolutionary programme and tactics on all democratic demands: a republic, a militia, the popular election of officials, equal rights for women, the self-determination of nations, etc.

None of these demands could be realised under capitalism, Lenin contended, except–at best–“in an incomplete and distorted form.”

Basing ourselves on the democracy already achieved, and exposing its incompleteness under capitalism, we demand the overthrow of capitalism, the expropriation of the bourgeoisie, as a necessary basis both for the abolition of the poverty of the masses and for the complete and all-round institution of all democratic reforms.

Lenin took what many call “the long view” of history:

Some of these reforms will be started before the overthrow of the bourgeoisie, others in the course of that overthrow, and still others after it. The social revolution is not a single battle, but a period covering a series of battles over all sorts of problems of economic and democratic reform, which are consummated only by the expropriation of the bourgeoisie. It is quite conceivable that the workers of some particular country will overthrow the bourgeoisie before even a single fundamental democratic reform has been fully achieved.

It is, however, quite inconceivable that the proletariat, as a historical class, will be able to defeat the bourgeoisie, unless it is prepared for that by being educated in the spirit of the most consistent and resolutely revolutionary democracy.

The radical working-class democracy to which Lenin committed his life was defeated in the wake of the revolutionary struggle. Despite his internationalist hopes, the Russian Revolution became isolated in a hostile capitalist world. The violence and economic strangulation orchestrated by a hostile capitalist alliance blocked the revolution’s goal of a far-reaching democracy, and a bureaucratic dictatorship crystallised under his comrade Joseph Stalin, despite the opposition of a dying Lenin.

Yet, despite the ultimate thwarting of the socialist revolution in Russia, socialists and activists internationally have continued to look back at Lenin and the Bolsheviks and his enduring revolutionary legacy.

Paul Le Blanc is professor of history at La Roche University and the author of many titles, including A Short History of the US Working Class; From Marx to Gramsci; and October Song: Bolshevik Triumph, Communist Tragedy.  He is on the editorial committee for the Complete Works of Rosa Luxemburg, co-editing volume 2 containing her major economic writings and volume 5 containing some of her major political writings.