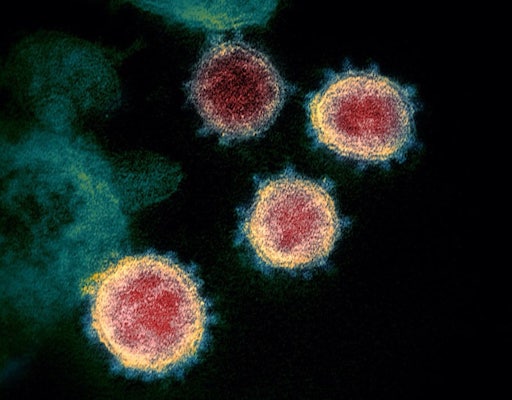 Closeup of coronavirus through microscope. Image courtesy of People’s History of the Coronavirus Pandemic/National Institutes of Health-Rocky Mountain Laboratories

The president and his secretary of state made a startling claim last week: that there is enough evidence to suggest with a high degree of confidence that the Wuhan Institute of Virology is the source of the SARS-CoV-2 pandemic.

That declaration followed a frenzy of activity of cable TV and talk radio. On April 15, Fox News reported that sources believe patient zero worked at the laboratory and then went into the population in Wuhan. The next day, Rush Limbaugh ran an episode of his show titled “All the Coronavirus Taboos You Can’t Talk About” in which he reiterated the patient zero-Wuhan lab theory. Several days after that, Rudy Giuliani pushed the connection on his radio show where his guest even proposed that the subsequent spread of the virus to other countries was a malicious and deliberate act by China.

A week after that, President Trump would make his announcement.

The only problem is that neither the intelligence nor the science supports the claim.

whether the outbreak began through contact with infected animals or if it was the result of an accident at a laboratory in Wuhan.

During a recent confirmation hearing, both Senate Intelligence Committee member Angus King and Director of National Intelligence nominee John Ratcliffe indicated they had not seen intelligence to suggest that the outbreak began in a laboratory.

Intelligence coming from allied nations threw more cold water on the notion, indicating that it’s “highly unlikely” that the coronavirus outbreak was spread as a result of a laboratory accident.

Beyond the lack of intelligence to support it, the notion is also unsupported by scientific experience.

While the Institute of Virology in Wuhan does conduct research on deadly coronaviruses—as do numerous other facilities around the globe—the odds of an accidental release from the lab are far lower than the odds of transmission on the outside.

That includes villagers living in the proximity of caves in Yunnan, China—the source of the original SARS virus in 2002. They not only come into contact with bats that harbor coronaviruses related to SARS, but have even been shown to be infected by them.

Even if safety was substandard at the Wuhan Institute of Virology, as suggested by State Department cables, any protective gear and laboratory safety training is better than none—which is what those on the outside that come into contact with bats have protecting them.

That’s why scientists have been sounding the alarm for years that these exposures in natural settings could cause the next SARS-like pandemic.

Then there are all of those individuals who traffic in wild animals and those who purchase and consume them. Much has been said on how not all of the early cases of SARS-CoV-2 can be traced to the Huanan seafood market. But that doesn’t preclude the possibility of transmission from other markets and other sources in Wuhan.

The lesson to be learned here is that the transmission of pathogens from animals to humans is a regular occurrence and that we need to conduct more disease surveillance, globally, to find viruses at their source and to stop their spread.

In addition, we must be vigilant about restricting wild animal trade. It is inexcusable that China, despite knowing that the 2002 SARS outbreak originated in bats, continued to allow trade in bats and other wild animals.

Our leaders ought to learn from these mistakes and take steps to prevent the next pandemic, instead of diverting our attention to unsupported sensationalist theories spread by cable TV and talk radio.