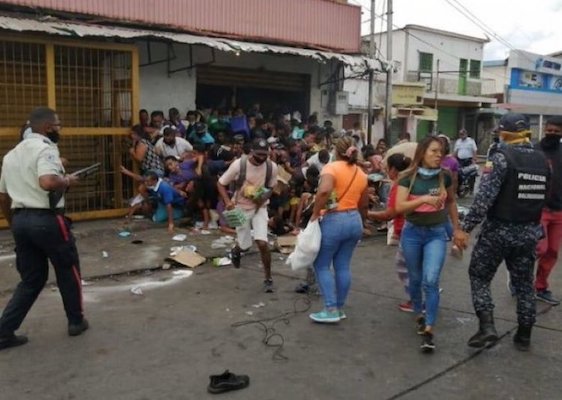 Venezuela is confronting COVID-19 amid foreign sanctions and mercenary incursions. Complicating matters further is the explosive combination of deep recession and a nationwide lockdown, which has triggered incidents of looting and riots.

Green Left’s Federico Fuentes spoke to National Network of Commune Activists spokesperson Atenea Jiménez to get a sense of what is happening in the country.

Could you begin by talking about how the government has dealt with the COVID-19 pandemic?

Everyone recognises that the government acted quickly to implement all-encompassing measures.

For example, Venezuela has carried out a regime of mass testing, with more tests done on a per capita basis than any other country in the region.

Through the online Homeland Platform, citizens have been able to let authorities know if they have any symptoms of COVID-19. Immediately, doctors go to their home and attend to those people.

A lot of work has gone into community healthcare over almost two decades through the program Barrio Adentro (Into the Neighbourhood). This is the basis on which the pandemic is being confronted: door-to-door visits by doctors, working together with people in the community.

The government has also implemented a nationwide quarantine and restricted travel between states and municipalities.

These measures have been essential, because Venezuela’s public hospital system has collapsed, in large part due to the sanctions and blockade imposed on the country, which mean hospitals do not have the equipment they need to function properly.

For a number of years now, the United States has imposed sanctions on Venezuela, which, in particular, have targeted the oil industry. These sanctions, combined with the collapse in oil price, have seriously affected Venezuela, as the country’s ability to import food, medicines and equipment is dependent on oil sales.

It is also important to note, though, that some states have implemented very drastic quarantine measures, essentially militarising the state. That is something we do not agree with.

For example, in Lara, the governor has implemented a curfew from 2pm each day, which means no one can be on the street after that, not even to shop for essential items or to try and resolve everyday necessities. The police are on the streets and people are arrested if they are found breaking the curfew.

But in many parts of the country, it is not that easy to resolve basic issues, due to the lack of running water, electricity and domestic gas. Many homes have no gas connected, so people need to buy gas bottles. But they are not easy to find. This has been an issue for a long time, but the situation has worsened due to COVID-19.

This means that people, for example in Lara, need to be able to move around. Of course, they need to wear face masks, practice social distancing, comply with all the necessary measures, but they also need to be able to resolve their everyday issues, such as obtaining food, gas to cook and water.

How has the government dealt with these everyday issues?

Here, the government has gotten it completely wrong. The pandemic has meant the economic crisis has worsened, a crisis we were already suffering from as a result of two fundamental issues: mistaken economic policies and the US-imposed sanctions and blockade.

On top of this, the majority of the Venezuelan population is only able to get by because of the informal economy and remittances. No one can survive solely off their salary.

The government recently increased the minimum wage, taking it to a little over US$4 a month. By comparison, it is estimated that families need $350–$500 a month to survive.

This situation is not new. There has been a long process of crushing wages, which has made it extremely difficult for people to get by.

But the situation has become even harder, given people cannot go out onto the streets whenever they need to, in order to resolve everyday issues in the informal economy or to withdraw remittances.

Is this what has driven the recent spate of looting in some parts of the country? Or have they been promoted by opposition forces?

The recent outbreaks of looting have been largely spontaneous. They have not been organised by any particular political group. The majority of these protests, which to date have occurred in small and medium-sized towns, have been popular expressions driven by despair.

That is not to say that in some places, in some cities, there aren’t opposition forces playing some role in the protests. But, from the information we have, their presence has been minimal or non-existent.

Instead, in the majority of cases, these protests have represented spontaneous expressions of anger by people desperate because they don’t have food, they don’t have an income and the government has not taken the necessary social measures to help them.

This has been one of the failures of the government: the nationwide quarantine has not been accompanied by the necessary measures to deal with its economic impact.

On top of this, we have seen the National Guard used to repress some of these protests, for example in Upata, where it appears they shot dead a protestor and arrested several more.

The situation is very complex and what is concerning is that it is not just the right that are not leading these protests but neither is the left–whether that is the critical left outside Chavismo, or the left that supports the government, but understands the need to accompany the population in their protests and demands.

It is a complicated situation, but it’s vital that we have an accurate analysis of what is occurring. To simply say these protests respond to an interventionist, right-wing policy obfuscates what is happening among a section of the people, and that could end up in a situation that explodes in our faces.

Finally, what can you tell us about the recent military incursions by foreign and Venezuelan mercenaries?

Incursions by U.S. and Colombian mercenaries is not something new in Venezuela.

For example, two U.S. mercenaries were detained during the 2002 coup attempt against [then] President Hugo Chavez for their role in those events.

Colombian paramilitaries were also involved in an incursion that made it all the way to the capital, Caracas, where they kidnapped a key leader of the Revolutionary Armed Forces of Colombia (FARC) and extracted him from the country.

What’s important to note this time around is that the operations carried out to protect our sovereignty were carried out by the Venezuelan people themselves. It was local fisherpeople who essentially arrested the mercenaries. This is an important element to highlight.

Venezuelans are clearly an anti-imperialist people, who will not accept any military action against our homeland. The majority of Venezuelans oppose such actions.

Of course, there are some in the opposition who support an invasion, who would like the U.S. to come in and put an end to the current situation. But the majority of the people maintain an anti-imperialist position. This has been demonstrated on multiple occasions.

They think that by sending 30–60 mercenaries to “save the country”, the people will join them. This is a sign of their complete lack of comprehension of the Venezuelan people, of our history, of our consciousness.

Federico Fuentes is a regular contributor to the Australian-based newspaper Green Left Weekly, and his articles have appeared in Counterpunch, MR Online, Aporrea, Rebelión, America XXI, Comuna, and other publications and websites in both Spanish and English. He has co-authored several books, including three with Marta Harnecker on the new left in Bolivia, Ecuador, and Paraguay.
View all posts by Federico Fuentes →

Venezuelan Army to escort Iranian tankers bringing gasoline to Venezuelans blockaded by U.S. sanctions
What are the three concurrent crises of the coronavirus depression?