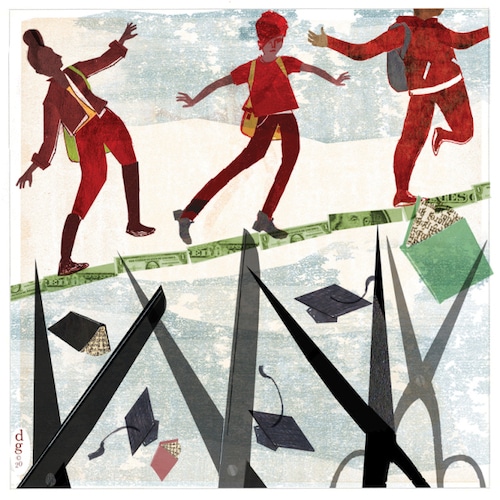 Will colleges and universities reopen in the fall? That’s the question on the minds of many these day—administrators, faculty, staff, students, and their families, not to mention the communities in which they live.

All institutions of higher education (in the United States and in much of the rest of the world) had a difficult spring, having to close their campuses for in-person instruction (as well as many other activities, from athletics to study-abroad programs) in response to the novel coronavirus pandemic and resort to online classes. There wasn’t much advance notice or planning and, notwithstanding the heroic efforts of faculty and staff and the unequal means of students who found themselves back at home, the results were at best uneven and less than satisfactory.

Now, the question is, what will they do in the fall, while the pandemic continues to accumulate millions of cases and hundreds of thousands of deaths around the world?

California State University—the largest system of four-year higher education in the country, with 23 campuses, 53 thousand faculty and staff, and 482 thousand students—recently decided it will close all its campuses for in-person instruction this fall. Most other colleges and universities of which I am aware either have publicly announced their decisions to reopen in the fall or are expected to do so.

Purdue University and the University of Notre Dame (my former employer) are the latest to do so. Over the weekend, the presidents of both schools published opinion pieces (in the Washington Post and the New York Times, respectively) explaining and attempting to justify their decisions.

Purdue’s Mitch Daniels put it in terms of balancing the overwhelming student demand to return to campus—”the young people who are our reason for existing at all,” who supposedly are not at risk—and protecting the “unusually small minority” (of students, faculty, and staff) “who could be at genuinely serious risk.” Not to reopen, he asserted,

would be not only anti-scientific but also an unacceptable breach of duty.

John I. Jenkins, speaking for Notre Dame, adopted a somewhat different stance, arguing that the decision to reopen the campus was based on both scientific and moral grounds. Following the science, he explained, would mean keeping “everyone away until an effective vaccine was universally available.” But, he added, relying on a selective reading of Aristotle, it is necessary for society “to bear burdens and take risks for the education and well-being of its young.”*

As readers can well imagine, both decisions were greeted with a great deal of skepticism and considerable criticism (as well as, to be clear, some tepid support). Here are some of the comments from both newspapers:

I can almost hear the dollar signs in his eyes

Immediate removal of this failed Presidential bid, incompetent Governor, who has no business to be the President of a university, should be demanded. This man is as bad or even worse than Trump. There is no place for a man like him in academia.

As a retired university professor, I am concerned about your ability to protect your faculty and staff. Undergrads as a group will have really good intentions, but that age group is not known for its ability to continuously focus on the well being of others. And there appears to be a such a large percentage of asymptomatic carriers that even with extensive testing it will be difficult to keep faculty/staff exposure to a minimum. I wish you all good luck.

I don’t hear any real consideration here of the faculty and staff who are at much greater risk as a cohort than students. What considerations were given to the “least among us?”–to evoke a resonant Christian theme—the elder faculty and staff, the hourly wage workers, those who have pre-existing conditions or care for those with these conditions, who work at the university. I think morality in this case is a bit more complicated than Rev Jenkins wants to have it here. Luck of the Irish to you!

The only way morality has anything to do with the health of college students on campus from an administrative perspective is whether you value money over lives. Schools are not going to be prepared to open in the Fall unless a vaccine or a universally effective cure is miraculously developed before then.

And that’s true across the country. I’ve been in touch with lots of university and college professors and staff members, including former colleagues, and there is a great deal of concern—from hesitation to resentment—about reopening campuses in the fall. Part of the reaction is certainly about health and safety, for members of the university of community as well as the people who live and work in the environs of those campuses (since both students and employees spend a lot of time off campus). It is likely that many of those campuses will become new hotspots, like meatpacking plants and nursing homes, for COVID-19. A second reaction concerns the amount of extra work that will be imposed on campus workers—from faculty through administrative assistants to cleaning staff—at the same time as they have faced furloughs, lowered pay, and cuts to their retirement benefits.

The problem they face is they’re not just there to assist young people to get a college education; they’re working in what I have called (since 2010) the new corporate university.

That university, and not the one portrayed in the public relations copy proffered by Daniels, Jenkins, and other academic executives, is a site for the production of commodities. Many different commodities, in both private and public institutions. Yes, they produce and sell the education commodity to students. But they also offer for sale plenty of other commodities: room and board, NCAA athletic performances, venues for special events, trinkets and apparel with protected logos, patents and royalties. They are also the site of funded research (from both public and private sources) and financial investments, as well as the source of paid consultants (especially in economics).

And, of course, the tail of other activities often wags the dog of undergraduate education, the ostensible reason for reopening offered by Daniels and Jenkins. Unless they reopen the campus for in-person classes, then there won’t be athletic competitions, especially football and basketball. And no revenues from housing and feeding the students or sending them abroad. Plus, if they don’t reopen for teaching, venues won’t be made available for renting for special events. And so on and so forth.

That’s not to say real, valuable intellectual and pedagogical work isn’t being conducted on college and university campuses. It is, at least to some extent, as I learned from almost four decades of teaching on and speaking at college and university campuses. But it does put the decision to reopen campuses in a new light. What’s at stake is the production of those commodities, and the revenues associated with them, and the way those commodities are produced.

As I recently wrote to some former colleagues, who were discussing the university’s announcement of the decision to reopen, which was communicated to faculty, staff, and students at the same time,

Dear friends, former colleagues among the faculty and staff, I don’t envy you. More is being demanded of you, under precarious conditions, and yet you’re only finding out what you’ll be up against with general edicts from on high. Many of you have voiced concerns, and then one or another on the inside steps up to assure you that the issue has indeed been discussed.

Permit me, if you will, to state the obvious: There are real health and safety issues with the reopening plan. There are also real employment and other economic issues. But what I’m hearing (reading) is, in the end, there’s a real governance issue. “They” discuss the issues, with all good intentions, and “you” have to figure out a way of working with what “they” have decided.

That’s no way for a university to operate, even during a period of exception—when, of course, such issues become even more acute, and the consequences even more serious.

I wish you all the best of luck,

The fact is, on most campuses with which I am familiar, the decision to reopen the university was made by administrators and then communicated to others, who are then forced to take on the tasks (often in addition to their normal activities) necessary to carry out those decisions. Yes, along the way, there may have been some consultation but the decision-making power rests in just a few hands.

That’s the way the new corporate university functions. “We” (the university faculty) work for “them.” It wasn’t that way when I first started as a professor, when faculty governance was the norm. I worked in an institution with at least some degree of governance by those who did the work (although, to be honest, the staff were mostly left out, which led to union-organizing efforts).

Now, that’s no longer the case at most colleges and universities. So, the decision to return to producing the various commodities offered by institutions of higher education is taken by the administrators and trustees, and then carried out by others, who played no role in actually making the decisions. And, as I wrote to my former colleagues, those decisions during this “period of exception” have even more serious consequences for all concerned, on and off campus.

That’s exactly why the decision of whether or not to reopen college and university campuses in the fall can’t be left solely to those currently in charge. It needs to be a collective decision. Not to move in that direction is an “unacceptable breach of duty” and a “timidity” that undermines the idea of the university.

*As one of my former colleagues (a philosophy professor) explained, Jenkins claimed the higher moral ground for his position, but, by Aristotle’s reasoning, the case may be the exact reverse. Here are a couple of quotes Jenkins didn’t include: “the man who exceeds in confidence about what is really terrible is rash” (NE 1115b27-28), and “but even death, we should hold, does not in all circumstances give an opportunity for courage: for instance we do not call a man courageous for facing death by drowning or disease” (NE 1115a). So, instead of accusing the “other” position of being morally deficient, and engaging in rhetorical grandstanding, the only option available is to work out, much more humbly, what would be possible in the current circumstances, and to proceed gradually and with great caution, as more information and resources become available.

Bethune’s socialized medicine and the public health crisis today
If you do not feel for humanity, you have forgotten to be human