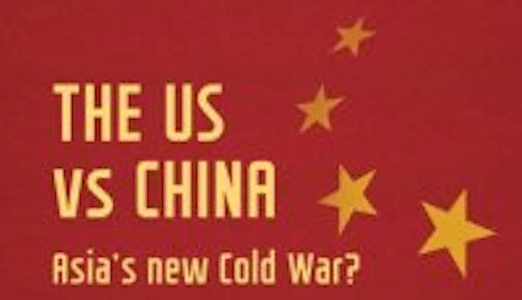 Jude Woodward The US vs China: Asia’s New Cold War? 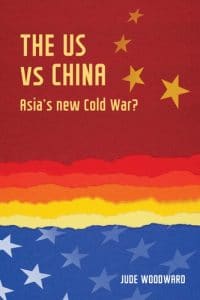 The coronavirus pandemic of 2020 has slammed into the global system with almost the same impact we might expect from an asteroid strike. All aspects of economic, cultural and political activity on the planet have been devastated and disrupted in ways that seemed unimaginable just a few months ago. Almost half a million human lives around the world have been extinguished already and the danger is far from over. Aside from the immediate biological threat of the virus, probably its most fundamental effect has been to stall the already faltering recovery of the capitalist system after the crash of 2008. The developed economies have been forced to take measures such as compulsory lockdowns, massive fiscal subsidies and draconian border controls on a scale that has never been seen before in peacetime.

The symbiotic economic relationship between the two titans of the global system, China and the US, had been pivotal to that recovery, as far as it had progressed in the pre-outbreak period. In 2018 however, U.S. President Donald Trump radically changed gears by initiating a trade war against Beijing. The political fall-out of the pandemic on the global stage is now further eroding diplomatic relations as a war of words has erupted between the two superpowers over which should shoulder the burden of responsibility for the crisis. Trump has accused Beijing of covering up the initial outbreak and has repeatedly referred to it as a ‘Chinese virus’. In response, Beijing’s Foreign Ministry accuses the U.S. president of seeking to deflect attention from the disastrous failures of his own administration’s domestic management of the virus. The potential for a war of words to spill over into military confrontation cannot be ruled out.

Jude Woodward’s study of the development of US-China diplomacy predates the corona crisis but still provides many useful clues as to how this renewed period of tension in their relationship might play out in the months and years to come. She usefully reminds us that although Trump’s foreign policy has been characterised by frequent bursts of crass Sinophobia, the fear and paranoia among the U.S. elite about their greatest rival really began to take shape under the administration of his predecessor. In 2010, Obama announced a ‘pivot’ of 60% of U.S. military power away from the Middle East and towards the Pacific (250). This strategic shift was the culmination of a decade or so of mounting consternation among Washington foreign policy commentators that Beijing’s stunning economic performance in the post-Mao era was creating the first credible challenge to U.S. global hegemony since the fall of the Berlin Wall. Propagandists on the U.S. side couched this redeployment in terms of ensuring equilibrium in terms of a balance of power, but Woodward shrewdly identifies the real agenda: ‘On the economic front these demands include opening up China’s markets on terms favourable to the West, privatisation of key industries, revaluing the RMB, deregulating its capital account and not developing production in areas of more advanced technology that would directly compete with the West’ (16). In other words, the U.S. is acting in the classic manner of imperialist powers of previous eras such as Britain and France at the turn of the twentieth century, seeking to thwart the emergence of a rival. The furore today over Huawei’s input to the 5G network in North America and Europe is another expression of this completive mentality escalating among the big powers. Woodward also notes that if such an economic strangulation were to succeed, another dividend for the U.S. would be the reduced ability of Beijing to offer material and moral support to recalcitrant states such as Venezuela and Iran that have noticeably managed to resist the will of Washington thus far in the twenty-first century.

Trump’s sabre-rattling belligerence is often presented by liberal analysts as out of character with the generally benign nature of the U.S. state as it has evolved over two centuries or so. Woodward’s observation that the intensified pressure on China in this century actually commenced under Obama is just one valuable corrective to this narrative of ‘American exceptionalism’. The author’s overview of the history of U.S. foreign policy neatly dismembers the myth of the country as a uniquely normative power, only committed to the diffusion of values such as freedom, democracy and pluralism, rather than acting out of a form of self-interest we take for granted from other powers. From ‘the megalomania of Manifest Destiny’ to the straightjackets of the IMF and the World Bank (both equipped with U.S. vetoes), Washington has carved a subtler version of the template of empire, but an empire nonetheless. Woodward explains that ‘its tactics in pursuit of its ultimately Brobdingnagian global project ranged from active to passive persuasion. And such arguments allowed the construction of a myth of the U.S. as a reluctant superpower, an anti-colonial state, when it was in fact pervasively seeking to coercively influence greater and greater spheres of the world’ (61).

Woodward describes how American analysts of international relations have tried to theorise the putative challenge from China. One of the most discussed models of the state of the global chessboard is Graham Allison’s ‘Thucydides Trap’. Taking a cue from the classic history of the Peloponnesian War by the eponymous Greek historian in the fifth century BCE, Allison posits that history is full of cases of rising powers encroaching on the hegemony of established powers, often triggering conflict regardless of the efforts of diplomats at the time to broker peace. Allison presents the U.S. as the modern equivalent of Sparta as the established power and Xi’s China as the counterpart of Athens, an ascending economic and military rival. Woodward is justifiably sceptical of this transhistorical and fatalistic perspective on the causes of war: ‘Ancient Greece was not at all similar to the world that faces the U.S. and China today, particularly economically. In a world where economic growth was insignificant…war to seize assets created by others, enslave populations or steal land was a rational route to enrichment’ (64). She notes the Chinese president himself has commented on the limited value of the ‘Thucydides Trap’ as a paradigm for understanding the contemporary world.

An alternative approach to China within U.S. foreign policy circles is the liberal notion of complex interdependence. Theorists such as Joseph Nye argue that the established role of American firms such as Apple, Walmart and General Motors inside the Chinese economy, in addition to Beijing controlling over a $1 trillion of U.S. debt, means the two superpowers are mutually dependent to an extent that precludes the possibility of inter-state military conflict. Woodward cautions that similar arguments ruling out the prospect of conflict between Britain and Germany were common in the years before 1914. The author contends that great power rivalry operates on multiple levels including the political and the military, and that an exclusive focus on the economic by liberal theorists such as Nye is unduly optimistic. She suggests Trump’s alternative strategy of confronting China could equally attract the support of aggressively protectionist elements of the U.S. financial elite: ‘According to such a perspective pre-emptively halting the rise of China is vital to protect the interests of global capital and will have a longer term pay-off for U.S. domestic industry by preventing China reaching the point of competing at U.S. levels of productively and technology’ (68).

Another valuable corrective to the standard Western narrative provided by Woodward is that China’s historical evolution as a great power has been characterised by a conspicuous lack of global ambitions; while in contrast, the U.S. has been remorselessly following an agenda of global hegemony since its initial emergence as a regional power at the beginning of the nineteenth century. The author recalls the ‘Five Principles of Peaceful Existence’ as espoused by Zhou Enlai who presided over Chinese foreign policy in the 1970s (46). Similarly a decade later, the country’s paramount leader, Deng Xiaoping spoke of pursuing a policy based on the motto: ‘hide strength, bide our time’ (47). Even further back in time, the Ming dynasty in the 1400s had spurned the opportunity for global expansion created by the voyages into the Indian Ocean by Admiral Zheng He (70). Woodward contends that the historic concern of Chinese rulers throughout the ages has been to prioritise the country’s vast land borders and not to divert resources to any expansionist agenda. The current leadership in Beijing, under Xi Jinping, is also committed to this essentially conservative global outlook, according to Woodward: ‘This perspective is not against any other country including the US. On the contrary, it is premised on the idea that relations between states can be organised to their mutual benefit and that the way to secure peace and stability is precisely to build on such win-win relations’ (256).

The only weakness in Woodward s otherwise excellent overview of the global chessboard is a tendency to take at face value statements of benign intent by the current Chinese leadership. Ultimately, China today has become thoroughly integrated into the operations of global economy and as such, is bound by the logic of the system in the same way as every other capitalist state, now or in the past. Xi may be genuine in his desire to avoid confrontation with the U.S. but the laws of motion of world capitalism, as Lenin and Bukharin argued many decades ago, ultimately operate outside the remit of politicians and twice already in the last century we have seen where that logic can lead. She also tends to dismiss legitimate struggles against the Chinese state such as those in Hong Kong and Xinjiang as little more than manifestations of CIA sponsored subversion (16).

Sadly, Jude Woodward has recently passed away. With this volume, however, she has bequeathed a valuable tool to help navigate the perils of the unfolding global crisis. In her memory, we should strive to enact the closing message of her last book: ‘in the end, the sword cannot win against the desire of human beings to go forward and improve their lives if they can see a way to do so’ (257).