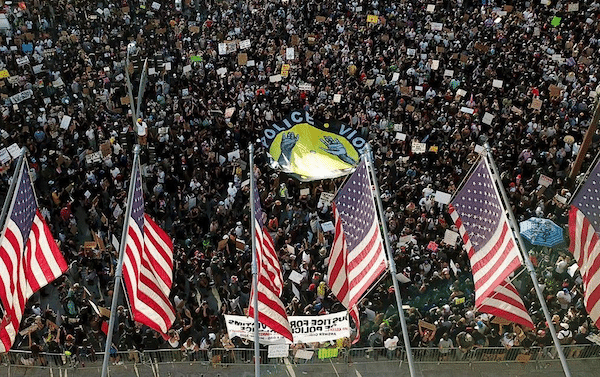 The breadth of the uprising is astounding with antiracism protests in all 50 states and more than 500 cities plus more than 13,500 arrests in 43 cities. This weekend there were larger numbers of protesters in the streets including cities and towns of all sizes. In Washington, DC, where we were, the crowds were multi-racial and crossed all ages but were dominated by black youth. People were united in their opposition to racism and police abuse and their calls for systemic change. 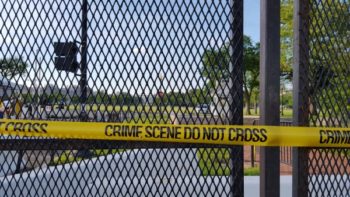 While the crowds were notable in the nation’s capital, across the country, and around the world, what stood out this week is the palpable fear emanating from the White House. President Trump, who has blown racist dog whistles from his first-day campaigning in 2016, is afraid. His fear is demonstrated by ten-foot-tall black metal fences, fortified by concrete Jersey blocks surrounding not just the White House but all of Lafayette Park to the bottom of the Ellipse, and from 15th Street to 17th Street. Inside this fence are rows of smaller fences, mobile searchlights, and scores of police and military. Dump trucks block every entrance. The White House fence, which was built higher during the Trump-era, is covered in a white shroud to hide what is behind it. Comedian Sarah Cooper mocked Trump’s comments describing his visits to the secure bunker under the White House when the protests were at an angry peak. The failures of the U.S. government to fulfill basic tasks of protecting and empowering people have reached a tipping point.

This Is A Take Off Moment For Ending Structural Racism

Racism in the United States did not start with Trump and it won’t end if he is defeated in November. The people at protests understand Trump is a symptom of deeper problems. While there were some anti-Trump signs outside the White House, the crowd was more focused on broader changes that are needed. The United States suffers from deep structural racism that creates economic inequality and an unfair criminal injustice system.

A national consensus is developing in favor of the protests. Polls indicate the public supports the uprising, sees the anger as justified, and even supported the burning down the police precinct in Minneapolis. Three out of four say racial and ethnic discrimination are big problems with 87% of black people believing they are more likely than whites to experience excessive force. Multiple polls show sympathy for the protests and support for their goals. There has been a shift in views on racism with the biggest change in acknowledging racism coming in the managerial class where many used to believe the U.S. had evolved into a ‘post-racial society’.

The persistent protest movement–which has been strengthening since there was a take-off after the killing of Michael Brown in Ferguson, MO six years ago and with the thousands of murders since then–has built national consensus for change. Now, there are opportunities for change but also challenges for the movement. Ajamu Baraka, of the Black Alliance for Peace, describes some of them in Black Agenda Report:

The enemy knows how to quickly adapt in the ideological struggle: 1) undermine the emerging unity with white agitator propaganda, 2) follow up with declaration against something called Antifa as a terrorist group, 3) instruct the police to join demos and express solidarity, 4) release statements from police chiefs and others pushing the bad apples theme, and most important, 5) keep the focus on the individual and call for ‘justice’ for that individual to avoid attention on the systemic and enduring elements of Black and Brown colonized oppression. 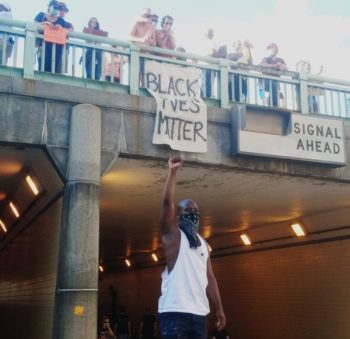 March in Washington, DC on June 6 2020. By Patricio Zamorano.

The Movement Can Overcome The Challenges We Face And Win

Here are some of the ways we can overcome the challenges the power structure is putting in our way.

Divide and Rule–Unite and Build Power: When the power structure sees white and black people uniting to work for common goals, it gets worried. It will do all it can overtly and covertly to divide the movement. For example, despite the FBI saying there is no evidence, the Trump administration accused Antifa (short for Anti-Fascist) of being an organization (it isn’t) committing violence at protests. In fact, a report found that a far-right group masquerading as Antifa was promoting violence. There is evidence that provocateurs, including officers in uniform, have been destroying property, and police have brutalized thousands of protesters over the past two weeks. Any attempts to denigrate one group or sow division, such as the ‘good protester/bad protester’ myth, must be met with skepticism.

We must strive for greater unity in the movement by linking our struggles and promoting a common vision of the society we wish to create. Just prior to the police murdering George Floyd, a movement was building for a general strike. That campaign is ongoing and is being manifested in various ways. Payday report cites more than 220 wildcat strikes, many involving working-class people of color, that have occurred in the United States since early March. Rent strikes are taking place and millions more are ready to rent strike. Black Lives Matter is calling for a statewide general strike in Washington state on June 12. The general strike campaign calls for nationwide actions on the first of each month.

The National Alliance Against Racist and Political Repression is calling for a national day of action on Saturday, June 13 calling for the transformational change of democratic community control of the police.

Offer Weak Reforms–Demand Systemic Changes: People exercising their First Amendment rights are calling for transformational changes such as abolishing the institution of police, ending the militarization of our communities, and investing in black and brown communities. Already, a few groups are working to shift the demands to a weaker platform such as spending less money on police and banning the knee-on-neck technique that officer Chauvin used to kill George Floyd. Banning techniques such as chokeholds have failed. Police still use them and they get away with it. While there must be justice for George Floyd and others killed by police, this is not only about convicting police who terrorize communities, but about stopping police terror and the entire racist system in the United States that is repressing people at home and abroad. Police serve as enforcers of the racism that pervades education, healthcare, housing, employment, the legal system, and foreign policy. The movement may celebrate minor victories along the way, but we must build power to win systemic changes that end the institutions and policies that perpetuate structural racism and inequality.

Diversion to Elections–Escalate Street Heat: There are already efforts to distract the movement to focus on President Trump and divert people’s attention to the upcoming presidential election. The Democratic mayor of Washington DC took performative action when she had “Black Lives Matter” painted on 16th Street in front of the White House, but DC residents weren’t having it and called her out for increasing the police budget while cutting social programs. In a recent essay, Obama urged reforms enacted through elections as have other black misleaders, as Margaret Kimberley describes. The always-opportunist Rev. Al Sharpton, a longtime Democratic operative, has called for a March on Washington on August 28. This will likely be a Democratic Party anti-Trump rally to kick off the final months of “get out the vote” for the presidential election. People know the record of Joe Biden–opposing integration of schools, escalating the war on drugs, being an architect of mass incarceration, and supporting the interests of his corporate donors over the necessities of the people. We will not elect our way out of these crises. We must continue to build our capacity to stay in the streets, even if it is once a week, and our pressure through tactics like strikes and other forms of non-cooperation to build enough power to overcome the ruling class.

Unleash the Counter-Revolution–Defy It: If the movement is not defeated by these tactics, but instead grows larger by unifying fronts of struggle and escalating our demands, there will be more efforts to suppress us. In Occupy, the Obama administration, through the FBI and Homeland Security working with local police, escalated their tactics, sending infiltrators into the movement to create divisions and throw the movement off course. It entrapped participants in crimes with serious consequences and used the media to create opposition. We know this is coming, so we can be prepared. Our goal must be solidarity, protecting each other, and remaining persistent with unwavering demands. When the power structure escalates their tactics, it is a sign we are winning. It is a show of weakness, not strength on their part and that means it’s time for protests to escalate.

These are all some of the common tactics used against popular movements. In our web-based free school “How Social Transformation Occurs”, we review these and other strategies used by the power structure and how movements can respond. People involved in the vibrant movements of our times need to be well informed so we are a movement of leaders who are prepared to win. 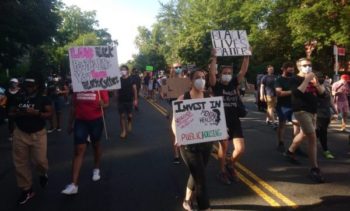 The Movement Is Already Defeating The Ruling Class’ Tactics

The media described the uprising as a “riot” involved in violence and property destruction but the movement responded by using videos to show black organizers trying to stop people, some of whom seemed to be undercover police or white supremacists. When mayors put in place curfews, people came out in larger numbers to ignore the curfew. When police assaulted people with batons, rubber bullets, and chemical weapons, they were caught on camera and shown to be the instigators of violence. In response to thousands of complaints about police actions, Seattle Mayor Jenny Durkan and Police Chief Carmen Best announced a 30-day ban on the use of tear gas and a review of police actions with an emphasis on de-escalation.

As the result of a class-action suit in Colorado, federal Judge R. Brooke Jackson ordered the police to stop using tear gas, rubber bullets, and other “less-than-lethal” forces like flash grenades and ordered body cameras to be used at all times. The judge noted videos of police injuring people, including journalists, without giving any warnings.

When President Trump threatened to use the military against people, there was a rapid response opposing him. Some GI’s and National Guard troops have refused to follow orders against the people. Courage to Resist has set up a fund to defend them. And, a lawsuit was filed against the police’s actions.

The movement for change in the United States has grown and matured in recent decades. We must continue to protest, be non-compliant with the power structure, defy the opposition’s tactics, support each other’s needs, and build alternative structures. This is how we will transform our society in a way that respects human rights and protects the planet. The time is now. Let’s keep doing the work.