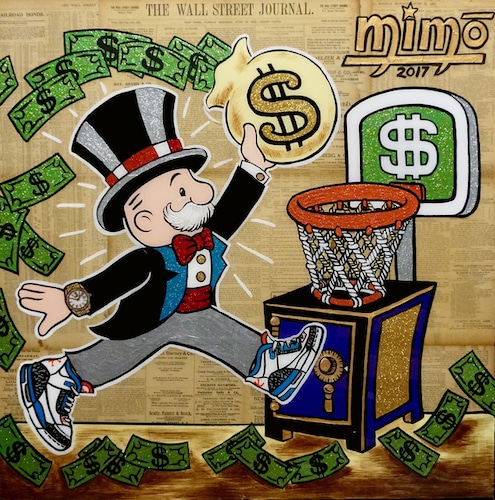 Being the biggest rich capitalist country, the U.S. also has the largest number of wealthy people. Quite how many will come as a bit of a surprise for those who have heard the ‘1% versus 99%’ slogan; it is not just Bill Gates and Jeff Bezos.

People might understand wealth as starting at different levels–a life changing fifty thousand for me might be just a nice holiday for you. However, a common statistical definition of wealth is of people with ‘net worth’–the value of their assets, including housing, minus their debts, including mortgages–in excess of $1 million.

On this definition, there are just over 18.6 million U.S. citizens who are wealthy.[1] That is nearly 6% of the U.S. population, and a higher proportion of the population if one considers wealthy families, including children.[2] Of course, a million dollars does not go far these days. But don’t worry, among this group are people with much more than that: there are three million with over $5m of wealth, and 1300 people with over $500m.

This accumulation of wealth does not only finance impressive lifestyles that can be the subject of TV shows and magazine features. The assets owned will generate an income in addition to any lucrative employment the wealth holders have, and these funds will form the basis of investment by financial asset managers, hedge funds and others.

In that way, the fortunes of many millions of U.S. citizens will be directly bound up with the prospects for capitalist financial markets, not only in the U.S. but also around the world. No need to wonder why there is so much political support for the U.S. military and measures taken against any threat to the capitalist order. A large, pro-imperialist section of the working class plays a key role in the political outlook too, as Trump will testify, but here is an important material base.

On the population percentage measure of wealth, the U.S. does not have the highest number in the world. Not every American is rich, it need hardly be said. A review of other countries suggests that Switzerland probably tops the table, with 9.5% of its citizens having net assets of more than $1m. The Netherlands and Denmark have figures between 4% and 5%, and other countries in Western Europe are generally above 2%, as is Japan. 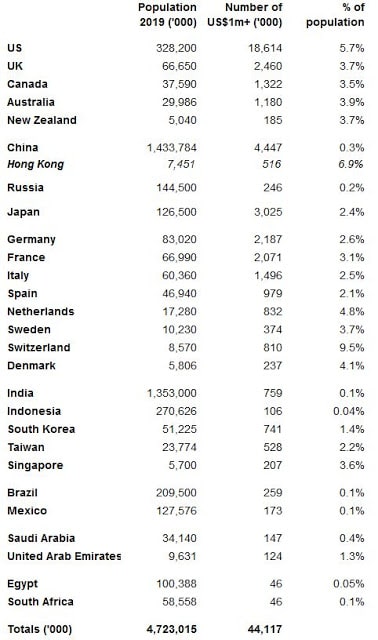 Notably, the ‘Five Eyes’ countries in the Anglosphere group–the U.S., UK, Canada, Australia and New Zealand–each has percentages above 3.5%. They have to have some unifying thing to talk about and be able to afford the correct attire to attend their nostalgic parties.

The poor countries of the world just can’t hack it compared to the rich guys. China, the supposedly great capitalist power, has a mere 4.4 million people with over $1m of wealth, just 0.3% of its huge population. They might be commies after all. Russia also has just 0.2% of its population with over a million dollars. So much for state capitalism. Presumably, the other Russian recipients of looted state assets are keeping a low profile in New York, London and Cyprus.

Hong Kong, counted separately in all statistical journals from China, despite belonging to China, better fits the bill. Its population of just 7.5m includes over 500,000 people with more than a million dollars and an impressive 153 with more than $500m. The respective percentages are 6.9% and 0.0021%. The latter number is very small, but five times that for the US. Taiwan also has 2.2% of its population who have more than $1m of wealth.

Other poor countries don’t often get above 0.1% in the millionaire-plus stakes. India, South Africa, Mexico and Brazil are at 0.1%; Indonesia and Egypt demand an extra decimal place, at 0.04% and 0.05% respectively, for the percentage of the population who have more than $1m of wealth.

Perhaps the United Arab Emirates and Saudi Arabia are the biggest surprises. Despite untold energy wealth, this has filtered through to an even smaller range of people than you might have thought. The percentage of millionaire-plus people is higher in the UAE at 1.3%; possibly because there are more royal families to share it with compared to the total population than is the case for Saudi Arabia, at just 0.4%.

The moral of this story is clear. If you want to improve your chances of being rich, make sure your parents come from a rich country.

[1] This wealth number and the related ones that follow are taken from the Credit Suisse Global Wealth Report 2019 and the associated databook. Percentages of population data are calculated using Internet sources for population numbers.

[2] For example, if a married couple each had more than $1m of wealth, it would make sense to include their non-adult children in the total of wealthy people.