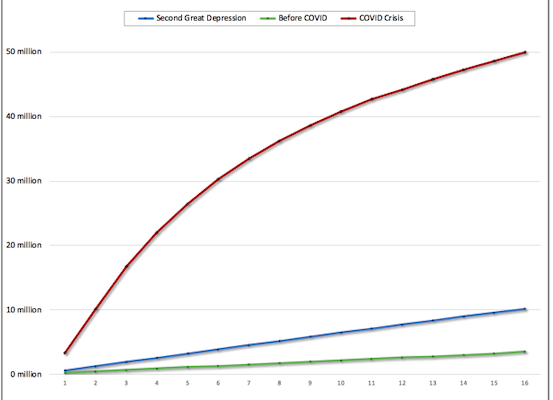 Since the first of June,
Lost my job and lost my room.
I pretend to try,
Even though I tried alone.

— Sufian Stevens, “Flint (For the Unemployed and Underpaid)”

Yesterday morning, the U.S. Department of Labor (pdf) reported that, during the week ending last Saturday, another 1.3 million American workers filed initial claims for unemployment compensation. That’s on top of the 48.7 million workers who were laid off during the preceding fifteen weeks.

All told, 50 million American workers have filed initial unemployment claims during the past sixteen weeks.

To put that into some kind of perspective, I produced a chart comparing the cumulative totals of the initial unemployment claims for the current pandemic compared to two other relevant periods: the worst point of the Second Great Depression (from the middle of January to early May 2009) and the weeks immediately preceding the current depression (from the end of November 2019 to mid-March 2020).

As readers can see in the chart above, the difference is stunning: 10.2 million workers filed initial claims during the worst 16-week period of 2009, 3.5 million from early December to mid-March of this year, and 50 million in the past sixteen weeks.

According to the most recent report from the Bureau of Labor Statistics, the number of unemployed workers actually fell by 3.2 million to 17.8 million in June, leading to an official unemployment rate of 11.1 percent—although, the surveys on which those data are based only capture those who were unemployed in mid-June, before the new wave of business shutdowns and layoffs.

Moreover, even as the protests ignited a national uprising against racism in the aftermath of the police killing of George Floyd and others, African Americans have experienced the slowest recovery of all racial groups. While the official black unemployment rate in June fell (to 15.4 percent), it is still much higher than the white rate (10.1 percent) and higher even than the Hispanic rate (14.5 percent).

On top of that, we should add in the workers who are involuntarily working part-time jobs—in other words, workers who would like to have full-time jobs but have been forced “for economic reasons” to accept fewer hours—and discouraged workers—Americans who are able to work but have given up looking for a job. The reserve army of unemployed and underemployed workers then rises to something on the order of 30 million Americans. 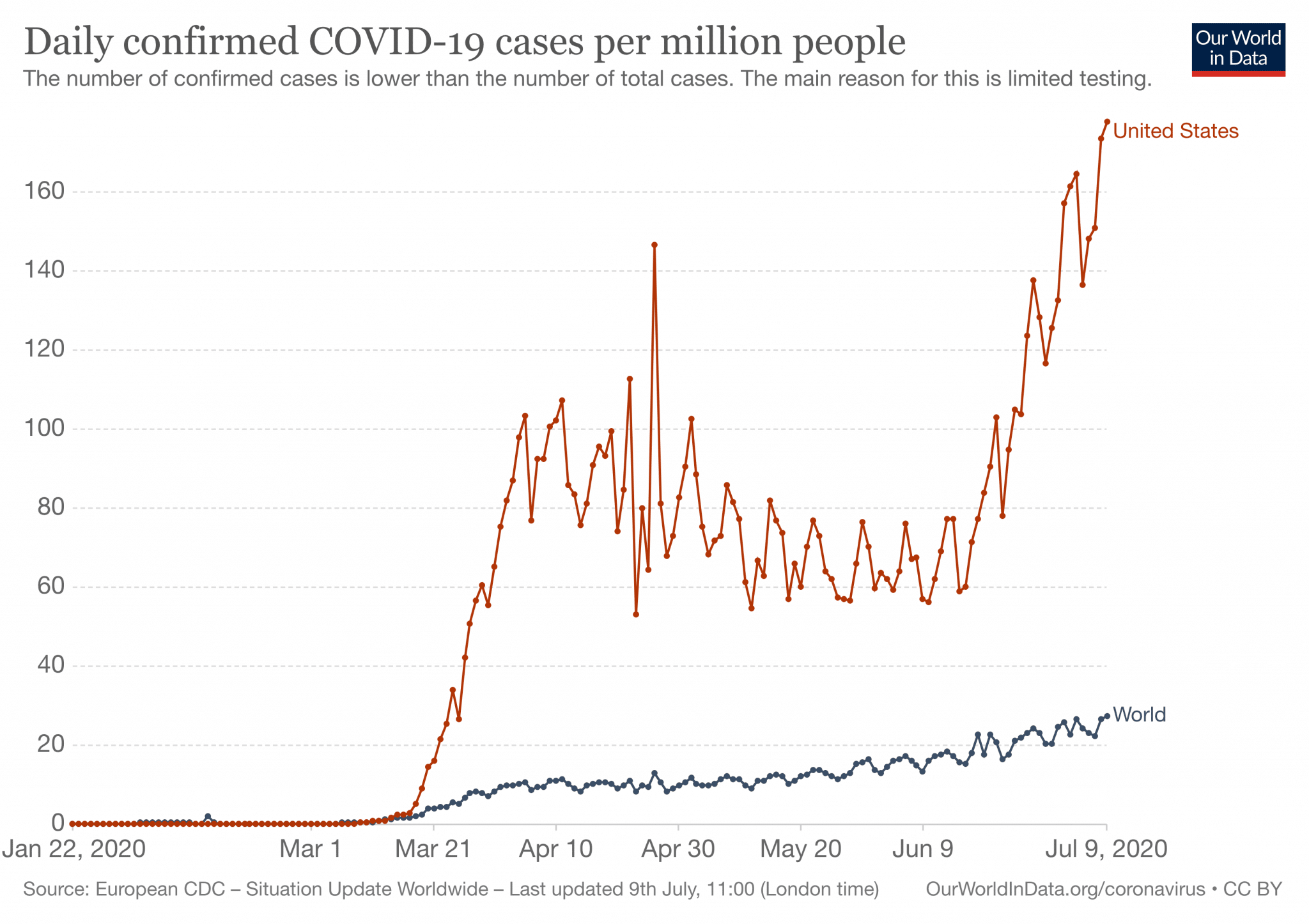 We can therefore expect to see new waves of business closures, which in turn will mean more American workers furloughed and laid off, and therefore a steady stream of initial unemployment claims.

The only possible conclusion to draw is that, unless there’s a radical change in the U.S. response, the existing economic and social disaster in the United States will continue to worsen in the weeks and months ahead.