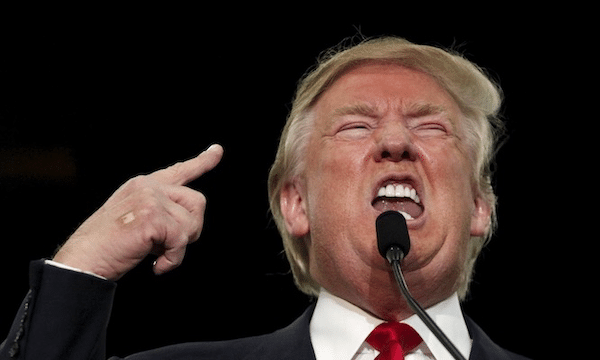 Most American leftists are incoherent on the term fascism, and Democrats have utterly destroyed the word’s meaning.

After seizing an initial beachhead around federal buildings in Portland, Oregon, Donald Trump is threatening to send his Homeland Security über alles storm troopers into cities around the country that he says are “run by very liberal Democrats…by the radical left.” Next on the list is Chicago, where 150 federal agents are set to be deployed in coming days. Homeland Security agents have already been sent to Seattle and Washington DC, and Trump has mentioned the need to “dominate” the terrain in Philadelphia, Detroit, Baltimore and Oakland. Meanwhile, the U.S. Justice Department plans to expand its “Operation Legend” urban intervention, currently targeting local crime in Kansas City, Missouri.

Just as other U.S. presidents have historically used the military as re-election props, staging attacks on U.S.-designated “rogue” nations and “terrorists” to solidify their voter base, so Donald Trump is campaigning as the sheriff that will bring law and order to the vast areas of the nation occupied by the “Black Lives Matter”-inspired hordes, last month. Although Trump’s armed intervention in local and state affairs seems politically at odds with his Confederate sympathies, his mass deployment of agents appears legal. Their behavior on the streets, however, is another question. “Unidentified federal agents in unmarked vehicles are snatching peaceful protesters off the streets, transporting them to unknown locations, without informing them of why they’re being arrested, and later releasing them with no record of their arrest,” said Marjorie Cohn, a former president of the National Lawyers Guild.

These actions are reminiscent of dictatorships’ secret police who kidnap and ‘disappear’ opponents of the regime. They are calculated to deter people from exercising their First Amendment right to protest against racism and white supremacy.

Yes, “reminiscent” of secret police in other times and countries, but the Homeland Security agents are actually behaving much like local cops anywhere in the United States. Chicago police for years ran a not-so-secret torture center into which Black men disappeared until they confessed to crimes they didn’t commit. Cities around the nation routinely deploy “jump-out-squads” of plainclothes officers that leap from unmarked vehicles to snatch people from neighborhood streets.  And most local cops assigned to suppress anti-police protests remove their badges and identifying markers. Both local and federal SWAT teams routinely wear masks to hide their identifies. This, too, is “reminiscent” of fascism, but it didn’t arrive with Trump in January, 2017.

Indeed, Trump is a relative amateur in the dark arts of domestic repression, his past experience limited to terrorizing tenants in his apartment buildings and “apprentices” on reality TV shows. The tools of state repression Trump deploys as The Mad White Avenger were already well-used by past presidents. Barack Obama’s FBI coordinated the national police crackdown on Occupy sites, nearly a decade ago–a huge roll-up of dissent involving the synchronized actions of a Black Democratic president and mostly Democratic mayors and their police chiefs. The Black woman mayor of Baltimore called the people that took part in the 2015 Freddie Gray rebellion “thugs”–dehumanizing her own constituents–as did Obama, whose U.S. attorneys demanded and got draconian sentences for defendants charged with property damage.

Obama made police state history when he got Congress to pass legislation allowing U.S. citizens to be indefinitely detained  without benefit of trial or charge–a leap into the abyss that even George W. Bush dared not make.

Civil libertarians are righteously upset that Trump’s Justice Department is coordinating with local police in using Facebook to charge George Floyd protesters with serious felonies—another harbinger of fascism. But local cops have for years used Facebook as a prime investigative tool. And federal-New York City police task forces under the heading of “Operation Crew Cut” largely depended on statements made in Facebook to indict over 100 young people at two Harlem public housing projects in 2014, and 120 more Black and brown Bronx youth in 2016–a raid billed as the largest “gang crackdown” in New York City history. Is it fascist to use Facebook against political dissidents, but OK when sucking the “usual suspects” (Black and brown youth) into the mass incarceration gulag? Or is it just fascist when Trump does it?

If most American leftists are incoherent on the term fascism, Democrats have utterly destroyed the word’s meaning. In their cartoon politics, fascist simply means “Trump.”

* Oppression of an internal “Other” as an organizing principle

* The political dominance of the most reactionary elements of the bourgeoisie

Donald Trump is an American fascist of the old, Jim Crow kind–but one who is also eager to utilize every modern tool of political and racial repression to preserve a capitalist system in fatal decline. Trump’s overtly racist politics, (as in “oppression of an internal ‘Other’ as an organizing principle”) makes him incompatible with the managerial “diversity” doctrine adopted of necessity by multinational corporations. He is, therefore, disruptive of capitalist rule in the 21st century–but extremely useful as a foil, which is why he was the corporate Democrats’ preferred opponent in 2016 and 2020. Having nothing to offer their base except endless austerity (“Race to the Bottom”) and war, the corporate Democrats have made Trump the sole issue of their campaigns.

Multinational capital and the national security state (CIA etc.) find Trump wholly undependable as manager of U.S. empire–which is why they cooked up Russiagate in collaboration with the Democrats.

The Republicans have for the past several generations been vassals of Big Energy, while the Democrats are the favored party of Finance Capital, which now dominates all the capitalist sectors, including the mass media and high technology. Within the electoral duopoly Blacks have no option but the Democrats, while about half of whites choose the Republicans, the overtly White Man’s Party even before the advent of Trump, the rash interloper. However, the corporate duopoly works best for all sectors of capital when the duopoly parties play “tag team,” periodically exchanging the reins of executive power with the least disruption to the capitalist order. {This is what they used to call the “genius” of the system.) Donald Trump’s humiliation of the Republican corporate establishment in 2016–with the decisive assistance of the Democrats and corporate media–destabilized duopoly politics, the institutional mechanism that, along with corporate media, mediates the differences between capitalist sectors and constructs a common political narrative (lies) for popular consumption. The result was a very public and destructive split in the ruling class, with the national security state (CIA etc.) openly collaborating with Democrats to render a sitting president politically illegitimate.

The good news is that the ruling class civil war has delegitimized, not just Trump, but the U.S. imperial order, itself. Once lost, political legitimacy can seldom be wholly reclaimed–and certainly not by a late stage capitalist order that is wracked with overlapping, accumulated, terminal contradictions, and whose imperial domain is steadily shrinking.

The bad news is, the U.S. Left is so weak, it has been unable to put forward a narrative that explains the multiple crises that have been so devastating to the American people, or to even minimally fulfill our obligations in solidarity with victims of U.S. imperialism around the world. Imagining fascism in cartoon terms personified by Trump, leftish Americans appear to believe that anti-Trump equals anti-fascist, when in fact Trump represents a Jim Crow atavism that the Lords of Capital have been trying to discard for half a century, in order to exercise power more effectively. They have, instead, been constructing a 21st century fascist order in which a tiny number of billionaires can rule without effective opposition, while much of the world is locked in a forced “Race to the Bottom” and all of humanity lives in terror of endless U.S. warfare.

President Obama was an operative of that  fascism–which is no cartoon, and kills millions. So are all the corporate Democrats. They are the most dangerous because so few people conceive of them as fascists, despite their abject subservience to corporate dictatorship, the carceral state, and endless warfare. We will beat Trump, for the simple reason that he does not represent the actual capitalist ruling class. The oligarchy wants him beaten–and they want us to thank them for pursuing their own interests, and getting rid of their own problem: the kind of service that oligarch Michael Bloomberg performs when he buys control of the Democratic Party’s infrastructure and purchases the loyalty of a substantial section of the Black political (misleadership) class.

Some American leftists who are unable to escape cartoon-thought fear Donald Trump will refuse to relinquish the White House if the votes go against him in November. They imagine that U.S. military generals will back up Trump’s coup, in a “Seven Days in May” scenario in reverse. How ridiculous! Any military coup would come from J-SOC, the Joint Special Operations Command, which oversees all the branches’ special operation troops, such as the (Army) Green Berets and (Navy) SEALS. Special operations units have always worked hand-in-glove with the CIA–indeed, the Green Berets are sometimes called “the CIA’s army.” Donald Trump, the “no more regime change” candidate in 2016, earned himself an implacable foe in the CIA.

If there is any coup-making in November, it will be on the Democrat’s behalf. And lots of folks that call themselves leftists will cheer, imagining the CIA as an ally in the fight against “fascism.”