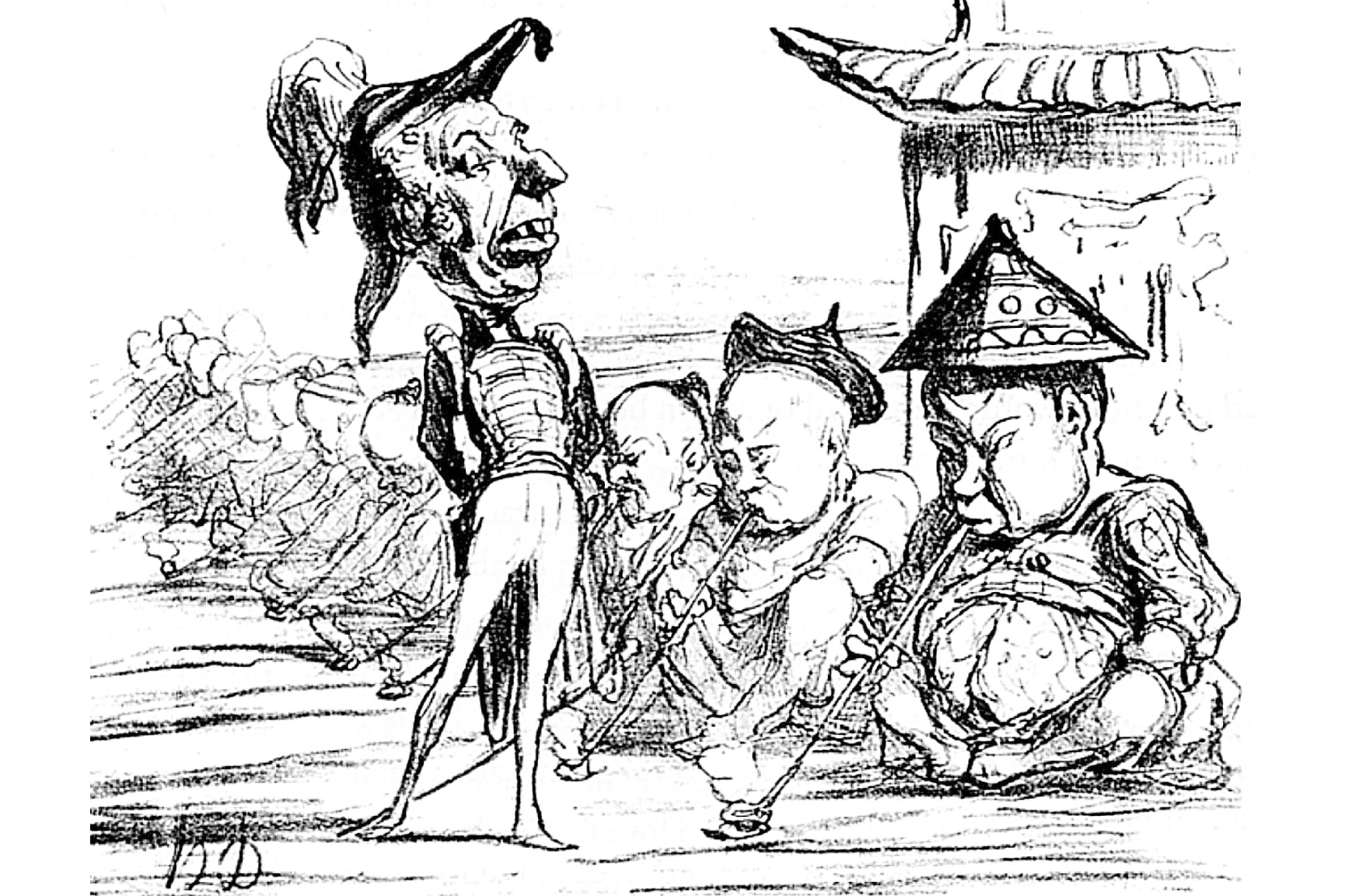 The circle is complete. “Global trade”, as we know it, began in Hong Kong in the 1840s and is coming to an end in Hong Kong in the 2020s. This tiny Chinese island has the misfortune to be the place where “global traders” conspire against global justice. It started with Britain’s Opium Wars and is ending with America’s Pivot to Asia. Under the cover of “global trade” imperialism has tried to conquer China. It may have started successfully in the 1840s but it is ending ingloriously in the 2020s.

In modern times, China has been the ultimate challenge for imperialists. The Americas, Africa, Arabia and India were all subjugated easily by the west. And after World War Two, even Japan became a western hostage. China however has been out of reach—it’s independence being an enigma to Europeans and Americans. From Marco Polo to Mike Pompeo, China has been a mystery to Christian crusaders.

But there’s nothing mysterious about China’s rejection of western subterfuge. In 1793 the Qing Emperor wrote the following to King George III: “Our celestial empire possesses all things in prolific abundance and lacks no product within its borders. There is, therefore, no need to import the manufactures of outside barbarians in exchange for our own produce.” 1

In short, if Britain wanted tea from China it had to pay with silver. Perfidious Albion, however, had another idea: flood China with “heroin” and, in the process, reverse the flow of silver. When China resisted this poisoning of its people, the British, in 1842, stole Hong Kong and imposed upon the Chinese the rule of the opium den (the Treaty of Nanjing). It was the beginning of a century of humiliation for China. And it was the last part of the jigsaw in the west’s version of “global trade”.

In fact, after the abolition of the African slave trade in the British Empire (1807), the opium trade in the South China Sea became the largest and most lucrative part of the jigsaw. Not only did Britain’s elite traders turn to narco-trafficking in China but so too did the elite traders of the USA. Britain’s East India Company and the British firm Jardine, Matheson & Company led the way. And Americans, like Samuel Russel, Thomas Perkins, Warren Delano and Robert Forbes, followed.2

They followed them to the “narco-state” par excellence: Hong Kong. Upon this stolen island the British created a dystopia that became a model for imperialism not just in Asia but everywhere. Enormous amounts of drug money—mixed with banking, racism and reaction—produced a global system full of contempt for justice. A system that was to be later found in cities like Shanghai (before Mao), Saigon (before Ho) and Havana (before Fidel). In more contemporary times, this toxic paradigm emerged in Panama City, Miami, Dubai and every other financial district in the world.

In his book History of the Opium Problem (2012) Hans Derks sums up the meaning of Britain’s Hong Kong:

[British officials]…reported already in 1844 that “…. almost every person possessed of capital who is not connected with government employment, is employed in the opium trade’ and later in the year said that opium was in general trade along the whole coast”…. Notwithstanding half-hearted missionary lobby work and other pressures, Hong Kong’s fate remained closely connected to this specific product and trade, …until long after 1900. 3

Derks quotes another observer of Hong Kong: “…the British exhibited disdain for the various lesser breeds who shared the colony with them, jumpers on the band-wagon of Empire…. But in particular they looked down upon the 98 per cent of the population who happened to be Chinese.”4 Derks adds:

In the most literal sense, the British colonial elite lived in Hong Kong high above the vulgus. The most senior British bureaucrats, military men and leading merchants, the taipans, lived together on the Peak, the cool heights, overlooking the homes of the Chinese masses. The latter had no rights whatsoever and were ruled in every sense by a British Governor…This [was an apartheid] dictatorship.5

As regards this model colony in the mid to late 20th century, Derks notes: “Mao [the leader of the 1949 Chinese communist revolution] liberated China from [war-lords]…. foreign domination, opium addiction and trafficking with its related corruption…. This example was not followed by the British in Hong Kong. On the contrary…. The main players in the opium gangs fled to this city, which had always participated somehow in the illicit business. Now, after World War II it again benefited from the drug trade as in the earlier days and once again Hong Kong became a world distribution center of opium, heroin and other narcotics.”6

China’s answer to Hong Kong is the Pearl River Delta Megacity. The communist revolution pitted labor power against the opium saturated / capitalist example of Hong Kong. If the latter was an imperialist experiment in narcotics, the Pearl River Delta Megacity is a Chinese experiment in human ingenuity. In other words, on Hong Kong’s doorstep China’s Communist Party constructed the world’s largest city—a city that is eclipsing and eradicating the racist stain that is Hong Kong.7

After the USA finally opened up to independent China in 1972 (Nixon’s meeting with Mao) trade between China and the rest of the world began to normalize. From the 1840s to the 1970s, imperialism had hijacked and sabotaged the development of China. Around 1980, those anti-Chinese policies ended and China could freely choose how and where it wanted to trade with the world. The ‘how and where’ was primarily a Special Economic Zone in Shenzhen—at the time, an agricultural town next to Hong Kong. It was an historical face-off.

And Hong Kong blinked. Shenzhen and it’s neighbors in the province of Guangdong (Guangzhou, Dongguan, Huizhou, Zhongshan Zhuhai, Zhaoqing, Jiangmen, Foshan and Shunde) linked up to form the Pearl River Delta Megacity. And Hong Kong retreated. In 1993 Hong Kong’s most important “opium” bank, HSBC, moved its headquarters to London. The writing was on the wall.

In that year, 1993, Hong Kong’s economy was worth 25% of China’s economy. Three years later (1997) Britain officially left Hong Kong, while China’s economy continued to grow exponentially. The Pearl River Delta Megacity was the engine of that growth and by 2018 Hong Kong was worth only 3% of China’s economy. The tables had been turned. The flow of history had been reversed. Global trade was now “Huawei led“ rather than “opium led”. The most famous product from the The Pearl River Delta Megacity, Huawei phones, symbolized the new direction of global trade.8

By 2013 China was officially the world’s greatest trader and much of its trade was bypassing the traditional centers of global economic power—the USA and UK. A new economic order was establishing itself internationally and its base was The Pearl River Delta Megacity. Once, the jewel in the trading world was Hong Kong, now it was Hong Kong’s neighbor—Shenzhen and the other giant suburbs of the Megacity. Once, “global trade” was a euphemism for western imperialism, now it really meant global trade. Thanks to China, the Global South was now trading directly with the Global South. And the Global North, the imperialists, were feeling peripheral.9

At this point, 2011, the USA declared that it was “pivoting towards Asia”. In the words of the then U.S. President, Barack Obama (while in Australia): “the United States is turning our attention to the vast potential of the Asia Pacific region…. I have directed my national security team to make our presence and mission in the Asia Pacific a top priority.” 10

Then in 2018, in case the message was unclear: “the United States adopted a National Security Strategy that featured great power competition as a primary ordering principle, following nearly two decades in which counter-terrorism was the dominant strategic lens. Chinese and Russian revisionism—their efforts to deconstruct the world the United States and its allies built—is indeed the primary danger to American national security today” 11

In other words, the USA had China in its crosshairs. After destroying Afghanistan, Iraq, Libya and Syria, in the first few years of the 21st century, the USA and its allies decided to turn their guns on China. It’s not surprising therefore that the prescient John Pilger released a documentary in 2016 called The Coming War With China.

When the USA decided to start a trade war with the Chinese in 2018 the signs were ominous. Like the British imperialists before, today’s American imperialists were angered by their own trade deficit and China’s trade surplus. And to emphasize the bad omens, Hong Kong reverted to type and became America’s beachhead in this titanic confrontation.12

Once again Hong Kong was weaponized. This time around, however, the soporific drug the island was offering to China, on behalf of imperialism, was “democracy”. In 2019 “pro-democratic” protests erupted in Hong Kong around the esoteric issue of extradition. And the Chinese government correctly sensed the deep involvement of America’s National Endowment for Democracy—an organization with roots in the “opium saturated” Central Intelligence Agency (CIA).13

The ex-colony, and now “semi-autonomous territory”, was repeating its past. Indeed, it looked like Hong Kong had never separated itself from its roots. In 2020, for example, the island’s most prestigious trader is the same one that kick started the Opium Wars in 1840: Jardine, Matheson & Company. A point which is noted in China. As Bloomberg explains:

And now that the drug dealing CIA is hyperactive on the island, Hong Kong’s 1840 DNA—western subterfuge—looks inescapable.15

And China’s 1840 DNA? Unlike Hong Kong, China has changed beyond recognition. The Pearl River Delta Megacity is proof of this. And so too is China’s 2020 National Security Law. Being abruptly denied the right to politically interfere in Hong Kong is a humiliation for London and Washington. China’s decision to checkmate western subterfuge is the culmination of a successful developmental model. One that’s global in scope rather than western-centric.16

China’s political sovereignty is based on a sovereign economic plan that includes western capital but is not determined by it. That’s the bitter pill the west must swallow. The west can only stand by, or make war, as China today redefines the world economically and politically. Global trade no longer needs the blessing of the west. It no longer needs opium (heroin) nor the imperialism that goes with it.

This ever expanding South South trade (the heart of global trade today) stems from the Pearl River Delta Megacity. Compared to the South North trade, which has been promoted by Hong Kong since 1842, the South South trade is a win-win for those involved. It is so because the overt and covert threat of war, drugs and racism is not embedded into the China led South South model. The same cannot be said about Hong Kong and its trading practices. It’s time is up. And imperialism can’t save it.