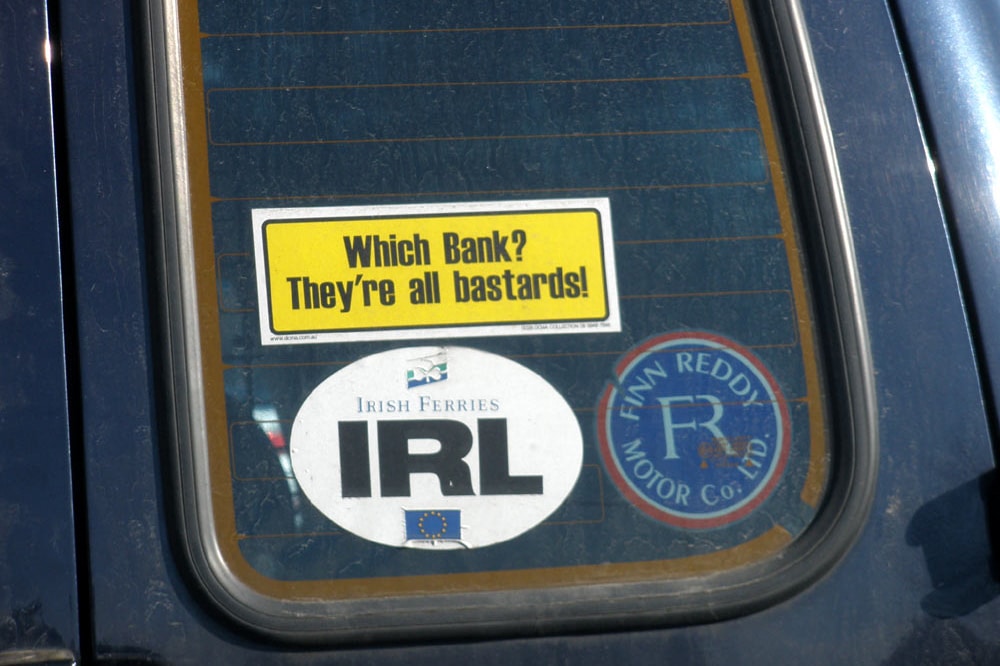 Do the Irish exist anymore? Brexit suggests that they don’t. It’s clear who now rules the country and decides its borders. And it isn’t the Irish. The future of Ireland is being decided right now in London and Brussels. And all the locals can do is look on. The Prime Minister, Leo Varadkar, follows instructions from afar. And the Parliament sounds like a trivial talking shop rather than a sovereign state. So what are the Irish good for then? What’s the point of the place and its people?

One thing the Irish can do well today is pay interest on a debt. Speaking in July, Connor O’Kelly, the fancifully titled “Chief Executive Officer of Ireland’s National Treasury Management Agency,” said:

So the primary purpose of the Irish state these days is to borrow money. And the lenders, O’Kelly noted, are all foreign capitalists. Why? Because there’s no domestic capital worth speaking about. In the capitalist world Ireland is a sitting duck.

For a state to be so dependent on foreign capital, O’Kelly remarked, is “unusual”. That’s true if you’re in Japan or America but its the norm in the Third World—a place were vultures have the final say—a place Ireland is structurally locked into.

Ireland basically is a rigged numbers game—the numbers being predictable and the loser too: Ireland. In August the Irish government revealed that the country’s “public debt” is €206 billion—that’s €5 billion more than last year. And the context? Before the 2008 banking crisis, Irish public debt was around €50 billion.

It was also revealed that—when today’s figure is broken down—the nation’s per capita debt equals €42,500. That’s up there alongside Japan and America. All of which means, in short, that Ireland’s tiny population (the number living in the Republic is 4.9 million) is carrying, on its shoulders, a considerable part of the global financial elite.

Foreign Capital is laughing. The Irish are not. To survive, the Irish have decided to let foreign investors do what they want in the country. And that’s another thing the Irish do well today—let capital do what it wants—in fact, this obsequiousness to foreign capital has been the backbone of the Irish economy for sixty years.

In the mid to late 1950s Irish governments began the economic policies which Ireland is infamous for today. Firstly, in 1956, low taxes (Export Profits Tax Relief) were offered to companies exporting from Ireland. Secondly, an official Irish report in 1958 (First Programme for Economic Expansion) launched the belief that Ireland ought to depend upon foreign capital. And thirdly, in 1959 the world’s first Tax Free Zone was created next to Shannon Airport in the remote west of Ireland. The end result of this logic is today’s foreign debt trap. And what feels like the death of the nation.

Comprador capitalism had become Ireland’s official ideology. In the 1950s foreign owned factories were the target. But when global capitalism changed its ways so did its Irish agents.

In the 1970s western finance capital pushed industrial capital aside. And in the 1980s, when Margret Thatcher unleashed the city of London and its financial shenanigans, Ireland’s “leaders” had an idea: why not turn Dublin into a branch of London’s corrupt capital markets?

Considering how reckless and idiotic this idea was for the Irish nation—it is appropriate that it was first suggested, around 1985, in a Dublin pub (Kitty O’Sheas). An ex-Citibank and ex-PricewaterhouseCoopers employee (Dermot Desmond) was the one “buying the drinks”. And a politician, tax advisor, banker, businessman and adman were the ones “getting drunk”. This was not a surreal Joycean moment but savage Irish realism. These were bourgeois compradors at work.

In 1987, on an 11 hectare site, not far from the aforementioned pub, an International Financial Services Centre (IFSC) was opened. It was a “special economic zone” modeled on the Cayman Islands. It was a tax haven that would distort not only the history of Ireland but also the history of economics.

New phrases had to be invented and new lows had to be reached to understand and embrace Dublin’s IFSC. “Leprechaun economics”, “Double Irish”, “Germany’s offshore tart”, “Lichtenstein on the Liffey”, “Iceland without the ‘c’” and the “Green Jersey Agenda” were added to the usual tax dodging and corrupt lexicon.

Nick Shaxson of the Tax Justice Network argues that Ireland is a “financially captured state.” That’s being kind, however. It suggests that the Irish state is partly or even wholly innocent. Whereas the truth is that the Irish state is completely complicit in the inhuman crimes of the financial industry. In global terms, Ireland hyperactively facilitates the capitalist parasitism that’s killing the planet.

For example, as Shaxson himself notes:

A U.S. Senate investigation in 2013 found that the U.S. technology firm Apple had used the Double Irish in what U.S. Senator Carl Levin called the ‘holy grail of tax avoidance…magically, it’s neither here nor there.’ These Irish-based entities were not taxable anywhere, enabling Apple to pay no tax on the lion’s share of its offshore profits. Citizens for Tax Justice in the U.S. estimated in 2015 that Apple would owe nearly $60 billion in U.S. taxes if it hadn’t stashed its profits offshore.

An Irish subsidiary at the heart of Facebook’s tax affairs funneled profits of €1.75 billion in 2012 to a pre-tax loss of €626,000 by paying mighty ‘expenses’ to another Irish Facebook subsidiary tax resident in Cayman. Similarly, Google escaped $2 billion a year in taxes using a ‘Double Irish’ scheme via the Netherlands and Bermuda.

So how does this official Irish penchant for foreign capital, and the latter’s need for high national debts and zero corporate taxes, trickle down to today’s Irish streets? It does so by attacking the very basic human need for shelter. What began six decades ago as a trick to attract a few factories into the country has ended up bringing homelessness closer to everyone living in Ireland.

When Ireland switched over to comprador capitalism in the 1950s—it abandoned serious attempts to stimulate domestic industry. So decades later, around the year 2000, when Ireland’s banks suddenly had easy access to foreign capital (the European Union’s big Euro experiment) there was no domestic industry to invest in. There was only property. Homes, therefore, became the spectacular Irish commodity.

Moreover, to take advantage of these new circumstances—the euro and the exposed property market—Ireland’s banks copied the unethical and irrational exuberance emanating from the state’s economic vision: Dublin’s International Financial Service’s Centre. By 2005, the New York Times noted that Ireland was indeed the “Wild West of European Finance.”

When this financial bubble exploded in 2008, not one Irish bank survived intact. And the residential property those banks gambled with lay on the floor of the Irish economy, like discarded poker chips.

To bailout the Irish banks and the foreign capital which backed them (the infamous bondholders), the Irish government, overnight, quadrupled the national debt.

And the poker chips—the property? After setting up bad banks and also becoming the leading shareholder in the banks that survived, the Irish government found itself, in the years after 2008, in direct control of a vast amount of houses, apartments, mortgages and land throughout Ireland.

However, instead of grasping the chance to reinvent democracy and home ownership in Ireland, the government, yet again, shamelessly prioritized foreign capital. Yet again, the Irish had to settle for second place in their own country.

Rather than manage the property justly, on behalf of the Irish people, the Dublin government quickly sold as much as possible to foreign capitalists, whose only concern was rent seeking. The buyers included, for example, hedge funds like Blackstone, “vulture” funds like Cerberus and affiliates of Goldman Sachs and Deutsche Bank.

As Financial Justice Ireland (FJI) points out: “Incredibly, in spite of Ireland’s small size, its two [bad banks] sold €36 billion of distressed real estate assets in 2013 and 2014, 37% of the total sold throughout Europe during the same period. 60% of all assets sold by [one bad bank] were bought by a single vulture fund, the Texas-based Lone Star Capital, whereas 90% of assets sold by [the other bad bank] went to U.S. firms.”

“Attracting international capital” was, as usual, official Irish policy. Ireland’s Department of Finance, for example, “met with vulture funds no less than 65 times in 2013 and 2014. In contrast, they met with groups advocating on behalf of mortgage holders just five times.”

Dublin has become one of the world’s 10 most expensive places to rent, ahead of cities like Tokyo, Sydney and Singapore…..The chief executive of [Canadian backed] Ires Reit, Ireland’s largest private landlord, said in late 2016, ‘We’ve never seen rental increases like this in any jurisdiction” and “I truly feel badly for the Irish people.’

It’s déjà vu. Foreign capitalists are making fools of the Irish. This time around, however, the foolishness is Irish strategy rather than British strategy.

Six decades of uncritically courting foreign capital has neutralized Irish independence. Or, more correctly, it has neutralized the Irish working class. Because the truth is that Ireland’s policy makers, since the 1950s, have only been a few elites. And their intention, all along, has been to return Ireland to the Empire. Evidence of this has been the transformation of Shannon Airport—the world’s first Tax Free Zone—into a de facto American Air Force base.