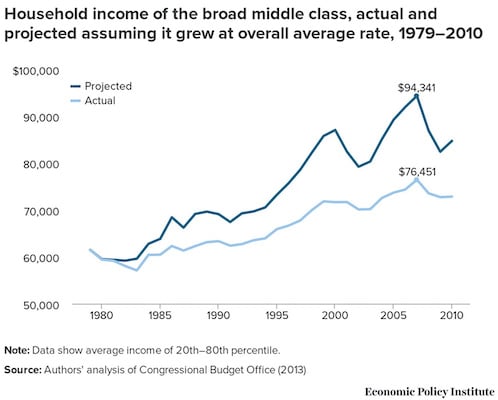 IN 2010 THE Commerce Department prepared data for the Obama administration’s Middle Class Task Force, headed by Vice President Joe Biden. Sidestepping knotty problems–see below–of just who was middle class, part of their study proposed a host of expectations that a middle class family would hold.

These expectations included “to own a home,” “to save for retirement,” “to provide a college education” to the children, “to protect their own and their children’s health, to “have a car for each adult” and to take a vacation annually.

The rarely acerbic Brookings think tank could not resist a dig. It observed that one huge constituency of those defined as middle class was the single parent with two kids and an income of about $25,000 per year. Surely it was impossible to imagine doing most, much less all, of those things with such paychecks.

We now regularly see articles on the “middle-class homeless” and the “middle-class hungry.” Greater wealth makes little dent in the problem. A recent Rand Corporation study shows that if the levels of inequality from fifty years ago had simply persisted that the median–the literal middle–income in the United States of $50,000 would today be about $97,000.

Instead the money went to make more things possible in the lives of the top 1% while lives in the middle became more impossible.

“Impossible” is a word used by many people typed and/or self-categorized as middle class to describe their own lives. Writers about the middle class prefer more precipitous words: precarious, sinking, and most often falling.

I chose from that menu in titling my recent book The Sinking Middle Class: A Political History. “Sinking” pays tribute to the best of George Orwell’s writing on the middle class and implies a gradual and grinding process–and also a miserable feeling–that characterizes middle class life even before a fall. Herman Melville’s Bartleby (“Bartleby the Scrivener: A Story of Wall Street”) sank.

The title’s “sinking” adjective works but it never fully dislodged indecision in my mind over an alternative title. The Impossible Middle Class remained a contender even as the book neared completion. Certainly the idea of “saving the middle class,” so dear to politicians across party lines and so associated with the impoverishment of U.S. political discourse since 1992, was impossible.

I remain fine with either choice of title, but do wonder if COVID 19 is about to lead us to the conclusion that middle class life, not just the posturing politics associated with its salvation, is what is impossible. Impossibility applies at the level of definition and of experience.

At the level of definition, the impossibility of pinning down the middle class is manifest. In the 2012 elections, both the Obama and Romney campaigns supposed that anyone making less than a quarter million dollars a year counted as middle class, the target constituency of both parties.

The pollsters commandeered even the poorest of poor (if only “aspirationally”) into the middle class, alongside those worth many millions. And yet roughly at the same time other experts in the financial institutions and even in political consulting reckoned only two in five in the United States actually belonged to the middle class.

The wild disparities involved as basic a question as whether “middle class” status hinged on variables measured by researchers or on self-identifications. If the former, the laundry list of measurements used varies tremendously but too often boils down to shorthand like “attended college” or “makes over $50,000 per year.” If the latter, how questions are phrased and what choices are given have complicated matters since the 1930s.

Unlike the working class, whose definition generally specifies a set of relationships with those who own their workplaces, hire their labor and manage their time, the middle class lacks any such firm set of others. Indeed as readers approach the end of the most celebrated U.S. book on the middle class, C. Wright Mills’ White Collar, they learn that its author doubts any such coherent class exists.

Mills drove home this point to argue that it was impossible for there to be a middle-class mobilization for progressive politics, the Holy Grail of much of U.S. politics for three decades now.

One time-honored left solution to such impossible analytical chaos has insisted that a firm line must be drawn between the working and the middle class; that research strategies to identify such a line are available, and that even at the level of self-identification well-designed questions can elicit responses that puncture the “everyone is middle class” myths so dear to Chambers of Commerce.

While sharpening such distinctions is desirable in many ways, we are left with at least 20% of the population who, over many decades now, identify as middle class while holding working class jobs.

New realities undermine the firm notion that the blue collar/white collar distinction defines a “class” line, but the gray areas rival the clear-cut distinctions: the skilled tradesman in a plant who takes a 60% pay cut when downsized into becoming a night manager at Home Depot, or the college lecturer impeccably credentialed and exercising significant autonomy in the classroom but without tenure, adequate pay or job security.

The broader, sadder impossibility comes at the level of everyday life. The good economic middle class citizen that the Chambers of Commerce extols is, as the twinned studies by the great economist Juliet Schor put it long ago, both the “overworked American” and the “overspent American.”

The indicators of good economic growth to which stocks historically respond suggest as much. A longer average workweek and rising “consumer confidence”–meaning taking on debt–are good market news.

We could imagine these paired problems as nevertheless besetting different groups of people. If so, the indebted might simply work more and the too busy could chill. But Schor suggests a different reality in which the same people–mostly the impossibly stressed-out middle class, though many of them holding working class jobs–suffer from both overwork and overspending.

Indeed she argues that they do so in a cycle in which lengthening bouts of alienated labor provoke desires for release through consumption, and thus debt and more need for work. In the decades before her books appeared, Schor argues, the average couple lost a month of time for leisure and social reproduction to paid labor. Since then, The Sinking Middle Class finds a further lost month, with distinctly gendered implications of time crunches in both instances.

Though reaching into other groups, both halves of the work-and-spend cycle particularly afflicted and even the defined the middle class. Credit buying for personal use, considered dissolute for much of human history, found a rationale in the 1920s by connecting credit with character, often as defined by middle class status.

When it was argued that, for example, auto workers had “become middle class” after World War II. their access to credit underpinned the argument as well as their high wages. The levels of debt of the middle class that Schor regarded as astronomical in the 1980s look positively manageable by contemporary standards, especially factoring in the rise of student debt.

Middle-class overwork had several defining characteristics. First was the absolute increase in the working hours of working wives, increasingly meaning middle class working wives, and the ways in which lack of overtime protections sometimes left middle managers vulnerable to laboring beyond the normal workweek.

But overwork also meant alienated labor, and here too the middle class had its peculiar problems. Monitoring of office labor and the necessity of being appealing in sales meant workers’ personalities were themselves marketed and judged. Spreading in the last eighty years beyond the office and counter–to the point where bosses often suspect that lack of performed happiness is subversive–such management of personalities remains focused in those jobs.

Alienated labor and compensatory consumption challenge the possibility of meaningful happiness. The Irish Marxist writer Terry Eagleton has described the system as needing a “prudently restrained [worker] in the office” but a “wildly anarchic” customer in the mall.

The middle class has long formed itself around a lack of collective response to the alienated labor and ill-fated individual attempts to fashion what Mills called “holiday selves.” Systemic structures lead us in both directions, but they do not say how we are to live in ways reconciling the two, and still less to teach young people how to inhabit such a world.

The Captain Morgan ads, with its endorsement of desperate attempts to create what Mills called a “holiday self” and its accompanying warning against alcoholic excess, stand as a fair symbol of the problem.

Our moment of danger–of COVID but also of fires devastating much of West and floods much of the Southeast–clarifies the impossibility of the middle class. The vaunted richest nation in the history of the world cannot afford even a short pause to save millions of lives. Individuals also lack ready resources to survive materially, and when the work-and-spend cycle pauses, psychically.

To realize the car-ownership goals noted in the first paragraph above would add to the 270 million vehicles already owned in the United States and do the planet no favors. Similarly, the urgent need for housing will lead to disasters of debt and environmental emergency if the houses continue to be the giant ones most successfully marketed in the United States.

COVID further lays bare the unsolved and deeply gendered middle class time crunch, with working women often expected now to suspend careers in order to provide caring labor when schools close and nursing homes become places of death. The pandemic likewise exposes the folly of making health the responsibility of the middle class family rather than a public one.

COVID and climate change have not so much caused as revealed the impossibility of sustainable and happy middle class life.