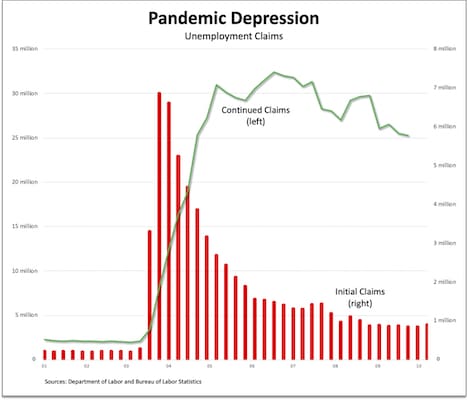 U.S. billionaires have recouped all of their wealth—and more—during the Pandemic Depression. Meanwhile, since May, the number of poor Americans has grown by about 8 million. And the number of American workers applying for and receiving unemployment benefits continues at record levels.

Pandemic be damned: America’s 400 richest are worth a record $3.2 trillion, up $240 billion from a year ago, aided by a stock market that has defied the virus.

When the Covid-19 pandemic began to sweep the world earlier this year, the wealth of U.S. billionaires plummeted in lockstep with the stock market. Yet, just six months after the market bottomed out—with hundreds of thousands Americans dead and the coronavirus still to be contained—the wealthiest Americans are doing better than ever. In other words, the pain, at least for the ultra-rich, was remarkably short lived.

Meanwhile, more and more American workers, who have lost their jobs or been furloughed, are attempting to survive on meager unemployment benefits. And many of them and their families—especially Black people and children—are now falling below the poverty line.

Part of the reason for this obscene growth in poverty is the expiration of the CARES Act’s $600 per week unemployment supplement. The other reason is that the number of American workers who are applying for unemployment benefits continues at elevated levels.

This morning, the U.S. Department of Labor (pdf) reported that, during the week ending last Saturday, another 898 thousand American workers filed initial claims for unemployment compensation. While initial unemployment claims remain well below the peak of about seven million in March, they are far higher than pre-pandemic levels of about 200 thousand claims a week.

The number of continued claims for unemployment compensation, while also below its peak, was still more than 25 million workers—a figure that includes workers receiving Pandemic Unemployment Assistance.*

In the meantime, at least 1,011 new coronavirus deaths and 59,751 new cases were reported in the United States yesterday. As of this afternoon, more than 7.9 million Americans have been infected with the coronavirus and at least 217.1 thousand have died—more than any other country in the world, grotesque outcomes that continue to receive barely a mention from Trump or anyone (aside from Dr. Anthony Fauci) in his administration.

The result will be new waves of business slowdowns and closures, which in turn will mean millions more U.S. workers furloughed and laid off. Unless there is a radical change in economic policies and institutions, Americans can expect to see steady streams of new COVID-19 infections and deaths, initial and continued unemployment claims, and growing poverty in the weeks and months ahead.

As for those at the top: during the first six months of the pandemic, the United States added more than 29 more billionaires, increasing from 614 to 643. The Pandemic Depression has been a boon to their fortunes.