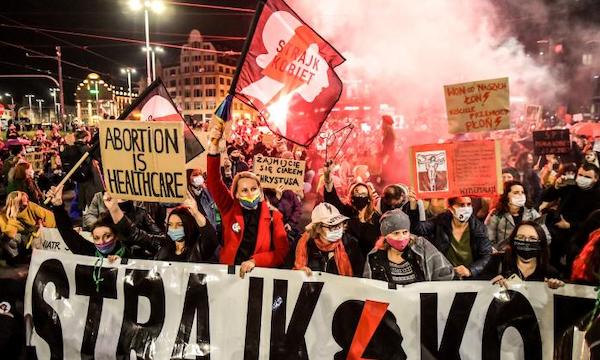 A mass movement in Poland has succeeded in delaying the implementation of a court decision that would ban nearly every abortion.

Abortions are already virtually impossible to access in Poland—the procedure is criminalised in all cases except when the pregnancy results from rape or incest, when the life or health of the woman is in grave danger, or when the foetus risks severe illness or death. On 22 October, the country’s new Constitutional Tribunal ruled that allowing abortions in cases where the foetus risks severe illness or death—which is the provision on which the vast majority of legal abortions in Poland depend—is unconstitutional.

The case was brought by a group of MPs from the ruling right-wing Law and Justice Party (PiS), which has been attempting to further restrict abortion rights since its election in 2015. In 2016, 160,000-strong protests forced the government to back away from an anti-abortion bill it hoped to push through parliament. Securing a ruling from the Constitutional Tribunal, which is dominated by PiS sympathisers appointed by the government, is a way to continue the attack while distancing the government from the likely hostility of the vast majority of Poles who oppose the further restriction of abortion rights. This manoeuvre has failed. The mass movement that has emerged in opposition to the tribunal’s ruling is far beyond the scale of that in 2016.

Mass rallies have flooded the streets since the ruling was announced. “The atmosphere of protests is amazing. For the first time after the Solidarnosc strikes in 1980, people from small towns and villages also take part in the protests on a massive scale”, Polish left-wing journalist Piotr Lewandowski tells me. “Today, protests are not, as at first, protests only in defence of women’s rights. They are already anti-government protests; against the fanatical, conservative right. The atmosphere for the first week of protests was revolutionary.”

Two of the most prominent slogans of the movement are “This is war!” and “Get the fuck out!” Electronic dance music has become a staple of the demonstrations. One video shows what looks like hundreds of thousands matching the beat of their chants with “Call on me” by Eric Prydz. In another, the song begins playing on a train and the entire carriage breaks out in a chant.

Central demonstrations in which hundreds of thousands fill the hearts of major cities like Warsaw have been complemented by protests organised on a more spontaneous basis by people who live in outer suburbs and smaller towns. There have been actions in more than 80 towns and cities across the country, according to historian Kinga Stánczuk. In one small town, farmers drove a column of tractors behind a protest to show support. Some schools and colleges shut down as part of one day of strikes, under pressure from teachers and students. Football fans, mostly middle-aged men, have also been actively involved.

“As with the Arab Spring”, says Piotr, “social media plays a very important role in these protests. People organise themselves through instant messaging and Facebook. The Women’s Strike Centre deals with the coordination, publicity and possible legal assistance for people who want to organise a protest in their place of residence. Field protests are organised and led by ordinary people who feel pissed at the government”.

Repression has been a big part of the government’s response. Michal Woś, a deputy justice minister, announced on radio that “all prosecutors in Poland are to treat the organisers of illegal gatherings as criminals … They will be threatened with up to eight years in prison due to the risk of loss of life or health, because the situation with the epidemic is serious”. A 14-year-old woman protester has already been taken to court.

The right has attempted to whip up a backlash against protesters by accusing them of attacking churches. “We must defend Polish churches, we must defend them at any cost”, Jaroslaw Kaczynski, chairman of the PiS, said in a video statement. “This attack is meant to destroy Poland.” Robert Bąkiewicz, one of the most prominent leaders of Poland’s far right, has formed what he terms a “National Guard” to “defend every church, every district, every town, every village”.

The Polish right are marked by extreme homophobia and sexism. In the lead-up to the presidential election in July this year, PiS candidate Andrzej Duda argued that “LGBT ideology” was a threat “worse than Soviet communism”, a sentiment echoed by the archbishop of Karakow, Marek Jędraszewski. Duda also proposed that the constitution be changed to prevent same-sex couples adopting children.

Poland’s main opposition party, Civic Platform, is not much better. Warsaw Mayor and Civic Platform presidential candidate Rafał Trzaskowski made it clear in the run-up to the presidential election that he, too, opposed the adoption of children by same sex couples. On the question of abortion rights, the party accepts the existing law, which bans terminations in almost all cases.

The trade unions have been mixed in their response. A statement released by the August 80 trade union, which is strongest among miners, announced that the union supported the movement and would offer free legal representation to protesters. One of the two largest union federations and the largest union, which covers workers in schools and colleges, have also expressed their support. But the leader of pro-government union federation Solidarity has argued for members to join the fascist National Guard. This “is completely at odds with rank and file Solidarity members, many of whom must today be taking part in the women’s protests as individuals”, according to Ellisiv Rognlien and Andy Zebrowski, writing in Socialist Worker.

As elsewhere, official mishandling of the pandemic is further exacerbating anti-government anger. Piotr speculated that the ban “was caused by the government in the middle of the pandemic to hide its incompetence” in the context of a high infection and death rate. Now the government has turned to scapegoating protesters: “The authorities are shifting the responsibility for the increase in infections onto the protesters”, says Piotr.

While the war is far from over, the movement has already struck a serious blow for reproductive rights. Wherever it develops now, it is teaching a new generation how to resist.