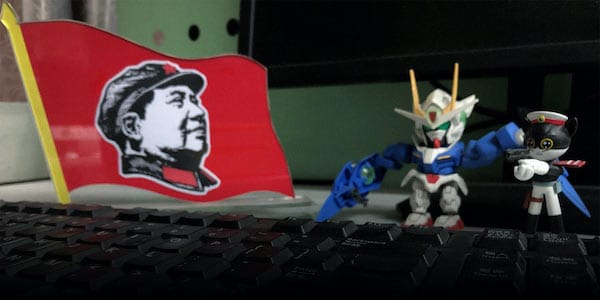 This article is the first in a three-part series on the ways online historians and writers are shaping the worldviews and mindsets of young Chinese.

Who is the greatest figure in modern Chinese history?

On the popular question-and-answer site Zhihu, however, there’s seemingly only one correct choice: Chairman Mao. In response to one prominent open-ended poll— “In China, who was the greatest individual to emerge since the end of the early modern period?”–over 95% of respondents picked the Great Helmsman.

All things considered, it might seem a reasonable answer coming from citizens of the country Mao helped found. But such a degree of consensus would have been unthinkable even just a few years ago, when Zhihu was a relative bastion of big-L Liberalism on the Chinese internet and arguments in favor of philosopher-writer Hu Shih or even Mao’s rival Chiang were far more prominent.

The new consensus is reflective of a broader ideological shift among young Chinese, especially those born in the economic boom times of the 1990s and 2000s. Simultaneously confident in China’s rise and nostalgic for the relative egalitarianism, equality, and revolutionary enthusiasm of the Mao era, they’re willing to look past the turmoil of his rule in favor of the work he did laying the foundations of China’s resurgence.

Underlying this change in attitudes is the emergence of the internet as a source and market for works of history. Historical knowledge is no longer passed on solely through academic books, journals, and periodicals, or even the hobbyist-dominated message boards, forums, and blogs of the internet’s early days. Instead, the growing demand for a new generation of history content relatable to young Chinese is increasingly being met by social media, video-sharing sites, and question-and-answer platforms like Zhihu, which give tech-savvy historians, both academic and popular alike, a much larger platform than ever before.

On the messaging app and social media network WeChat, for example, history-focused public accounts such as Jinglue (Consilium), Science and Industry Power, and New Wave Meditations have won large audiences of young readers by publishing engaging articles on historical subjects. Forgoing the lyrical prose and petit bourgeois emphasis on humanism in many post-’70s histories, they stress “scientific” ways of thinking and adopt a detached tone. Heavy on data and material analysis, they tell an overarching macroeconomic narrative with a focus on the rise and fall of political regimes, economies, and the “great men” who shape history.

Many of these articles are not even about China–at least not directly. A number of authors and accounts focus on a subject frequently overlooked in domestically produced histories from the 1980s on: what Mao called the “Third World.” In the 19th century, countries and regions from Africa to South America and even China itself faced a common enemy in imperialism and the threat of colonization by the West. But because few of these regions followed the same revolutionary path as China, authors of these new-style histories explain, they remain oppressed and impoverished even as China has grown strong. It’s comparative history as moral lesson: Chinese must remain vigilant, or they, too, will once again be subjugated by imperialists.

Thematically, if not stylistically, their work bears strong resemblances to the work of the late Qing dynasty (1644-1912) and early Republican era scholar Liang Qichao. In essays on subjects as diverse as the history of the ancient city-state Sparta to the colonization of Korea, Liang sought to provide Chinese readers with an accessible intro to global trends and history, awaken them to the dangers posed by Western imperialism, and inculcate in them a sense of patriotism.

Many contemporary histories take themselves and their arguments very seriously. Elsewhere, animated history videos and lectures on major historical works have become popular on streaming platforms such as Bilibili, while on Zhihu, netizens–some with backgrounds in history, some without–engage in lively debates on historical topics.

Together, these articles, videos, and posts embody and shape the basic understandings and positions of today’s Chinese youth on the history of China and other countries, and they are contributing to the formation of new views of history entirely different from those held by children of the 1950s, ’60s, and ’70s.

Among the most prominent of these new views is the increased recognition of and appreciation for China’s “socialist period” (1949-1979). Beginning not long after Mao’s death in 1976 and stretching through the 1980s and ’90s, many Chinese intellectuals and historians openly embraced the West, liberalism, and humanism as China’s future, while rejecting China’s own traditions and the revolution Mao wrought. Their work naturally reflects this tendency, and is frequently filled with nods to the “beacon” of the United States and dismissive attitudes toward China.

For young Chinese, who’ve grown up in a very different international, political, and economic milieu, it’s increasingly hard to relate to this outlook. Rather than viewing the Mao era as a failed utopian project, they increasingly credit these three decades–and the men and women who lived through them–as having produced the major advances in basic industry, society building, life expectancy, health care, cultural production, and national security on which their lives and prosperity are founded.

The “Industrial Party” approach to history is an example of how this looks in practice. A loose confederation of like-minded thinkers–some with academic backgrounds but many without–the Industrial Party school centers its narratives on the construction work and material achievements of China’s socialist era, particularly emphasizing the effect of early infrastructure, including both the development of industry and transportation networks, on China’s later economic growth. Dismissing the soft-hearted humanism of what they call the “Sentimental Party,” they stress how industrialization has been a boon to societies around the world, and as such, more than justifies the costs. 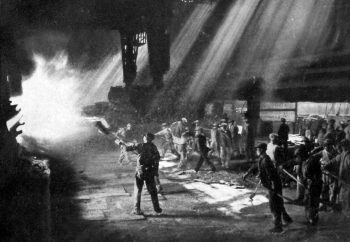 Workers at a factory in Anshan, Liaoning province, 1958. Sui Piyong via Wikimedia Commons

The rise of the Industrial Party has been accompanied by a reappraisal of what constitutes an intellectual. Adherents believe the term should not be restricted to the humanist thinkers that have long dominated China’s public sphere. Instead, it should be expanded to include talented individuals from the fields of science and engineering who made contributions to the advancement of science and technology in the New China. Particular favorites include Deng Jiaxian and Guo Yonghuai, two scientists who played key roles in the development of China’s nuclear weapon and space programs. Many young Chinese now argue that these figures contributed far more to national development, possessed far greater political virtue, and better embodied the spirit of “devoting oneself to the ordinary people” than any mushy scholar.

Of course, no reappraisal of China’s socialist period can avoid the question of Mao, and Industrial Party and other, similar articles are often flooded by comments from readers describing how their attitudes toward the former Chairman have shifted.

They talk about how they used to buy into the liberal and right-wing narratives that painted his time in charge as a disaster. When they got older, however, and began to consider not just China’s problems, but global issues from a truly independent viewpoint, they say they realized just how important he was to building the foundations of a strong China and keeping the country free from imperialism.

To borrow a term, what’s happening here is the political maturation of young Chinese. “Political maturity” refers to the ability of citizens to critically analyze and reflect on problems and issues within their own historical and cultural context. Instead of blindly romanticizing the West, liberalism, and capitalism while rejecting the legacy of the Chinese revolution–as the previous generation did–young Chinese are reconsidering their history, civilization, and politics on the basis that the revolution was a major, if incomplete success.

Of course, reconsidering isn’t enough on its own. It’s up to the next generation–of netizens, but also academics, media, and content creators–to keep pushing their understanding of China’s past forward in a rational, logical way. Only then can we develop a discourse about China that is both conscientious and worthy of the name.

Wang Rui is an associate professor of history at East China Normal University.