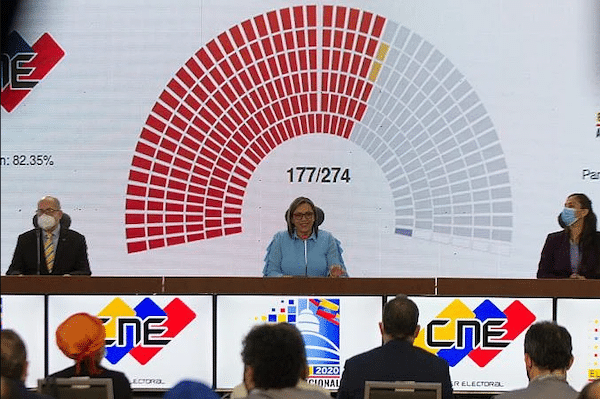 The ruling United Socialist Party (PSUV) and its allies have swept Venezuela’s parliamentary elections and regained control of the National Assembly (AN).

According to the National Electoral Council (CNE)’s results, government-backed candidates are projected to win at least 189 of the 277-seat assembly after netting 68 percent of the vote with 98.63 percent counted.

Combined opposition parties, which have controlled the parliament for the last five years, won only 28 percent of the vote, losing control of the legislative body. The traditional Democratic Action (AD) and Copei parties led the opposition’s efforts.

For its part, the newly formed Popular Revolutionary Alternative (APR) leftwing grouping, which was running on the Communist Party ticket and had previously decried state-led censorship during the campaign, won around 3 percent and returned one deputy.

One of the most striking headlines of the day, however, was a high abstention rate. According to the CNE, only 30.5 percent of the electoral roll participated in the vote, well below the 74 percent in the 2015 AN elections. Both the PSUV and opposition blocks saw their total votes drop considerably on Sunday, by 20 and 77 percent, respectively.

Turnout has fluctuated considerably in Venezuelan legislative elections, with a 66 percent turnout in 2010 more than doubling the 25 percent total in 2005, when the entire opposition block boycotted the vote.

According to CNE President Indira Alfonzo, Sunday’s organisation of the election was “exemplary” and “impeccable.” Several of the individual races and elections from party lists have already been called, with full results expected in the coming days.

“Venezuela awakes with a new dawn for peace, joy, coming together and a strengthening of our democratic institutions,” he said in a televised address. “A new stage in the reconstruction of the parliament and the recuperation of our county has begun.” Maduro, who had threatened to resign if his party was defeated, also congratulated CNE officials for their hard work in organising the event during the COVID-19 pandemic.

Opposition groups and the Popular Revolutionary Alternative are yet to comment on the results.

Sunday’s election has been recognised by the vast majority of the global community, with Russia’s Foreign Office spokesperson Maria Zakharova telling press that

The Venezuelan electoral process was organised in a much more responsible and transparent way in many aspects than in some countries which claim to be ‘flag-bearers of democracy’.

Over 200 independent, on-the-ground international observers also green-lighted Sunday’s vote, highlighting the fluidity and soundness of the process. Detailed international reports are expected to be released later this week.

Venezuela’s Attorney General Tarek William Saab and Defence Minister Vladimir Padrino Lopez likewise reinforced the transparent nature of Sunday’s vote, with the former stating that no reports of incidents had been received and that the vote was held in a “civil and peaceful manner.”

Despite Saab’s comments, an irregularity was made public by the Communist Party of Venezuela (PCV) on Sunday after the party’s offices in Valmore Rodriguez municipality of Zulia State were allegedly raided by security forces, with a number of party members arrested. During campaigning, the APR and PCV also denounced persecution against some of their candidates.

For its part, the Trump administration, which is currently embroiled in unsubstantiated fraud claims over the U.S. electoral result and had already claimed that Venezuela’s Sunday vote was fraudulent back in August, was quick to reiterate its rejection of the elections.

Taking to Twitter on Monday, U.S. Secretary of State Mike Pompeo claimed that the vote was “an attempt [by Maduro] to steal Venezuela’s democratic future,” a position which was echoed by the United Kingdom and the European Union. European authorities turned down an invitation to send an observer mission in September.

In a statement released Monday, the UK government justified its rejection of the election on the grounds that it “did not meet the requirements of Venezuelan law,” even though it was a constitutional requirement that the elections be held this year. London also took the opportunity to double down on its support for opposition leader Juan Guaido’s self-proclaimed position as “interim president.”

Guaido, who called on his supporters to boycott Sunday’s vote, similarly announced that he will not recognise the new assembly and plans to continue his “functions” and “constitutional mandate” beyond January 5, when the current AN’s mandate expires.

Sunday’s vote saw 14,400 candidates from 107 political parties compete for seats, of which nine parties backed the government candidates and the rest ran independent candidates. 14,000 voting centres were used with an average of around 1500 voters enrolled per centre.

Venezuela is expected to hold local and regional elections to choose mayors and governors in 2021.