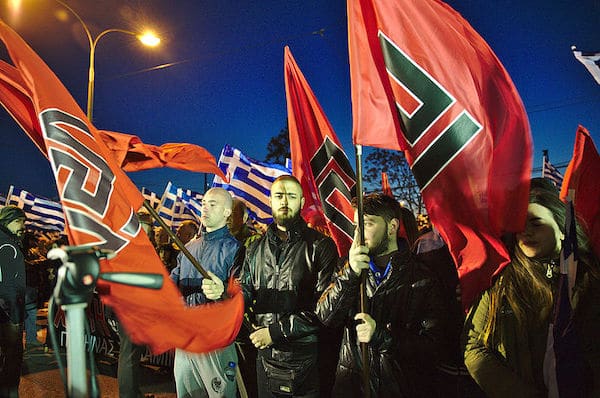 a very big victory, both for the victims and for the anti-fascist movement.

Our colleague Ezgi Cakir, from Progressive Lawyers Association of Turkey is an asylum seeker who lives in Athens. She conducted an interview with Thanasis Kampagiannis on behalf of the IADL. Attorney Kampagiannis is also a lawyer in Athens. He represented the Egyptian fishermen in the Golden Dawn trial. The Golden Dawn trial is one of the most significant incidents of 2020 and obviously the lawyers in this trial made an incredible contribution to our common struggle.

Cakir: Dear Thanasis, first of all thank you very much for agreeing to answer our questions. I know that you have been overworked in the last weeks. The outcome of your collective efforts made all of us very happy. Could you tell us about the background of this trial and the legal background of the prosecution?

Thanasis Karpagiannis: I am the lawyer for the Egyptian fishermen who were attacked by the Golden Dawn battalion squads in 2012. This attack, plus the murderous attack against Communist trades unionists and the murder of Pavlos Fyssas, were the three major attacks by the members of the Golden Dawn who were tried in this case. The penal prosecution against the Golden Dawn was done through the Article 187 of the Greek Penal Codes, the article for forming a criminal organisation. The Golden Dawn leadership was accused of directing a criminal organisation. So apart from the three cases, the accused were indicted for being members or directors of a criminal organisation. The prosecution started in September 2013 after the murder of Pavlos Fyssas, the result of an anti-fascist uprising and large anti-fascist demonstrations not only in Keratsini where Pavlos lived and where he was killed, but also all over Greece. Then the rightwing government of Greece, the New Democracy, which until then covered up for the criminal actions of the Golden Dawn, was obliged to act and press charges not only against its members but also against its leaders. The trial started in April 2015 and it finished in October 2020, lasting five and a half years.

Cakir: Could you give us more details about the trial and the judiciary process?

In this case we had not only the examination of the three cases that I already referred to for which the court needed to issue a separate court decision each for the murder of Pavlos Fyssas and the attempted murders of the Egyptian fishermen and the Communist trade unionists but the court also examined dozens of other cases where Golden Dawn members and battalion squads attacked either migrants or ideological-political opponents of the organisation. It was revealed during the court cases that the organization had national socialist character.

Golden Dawn leaders have always said that they are Greek nationalists and that they have nothing to do with national socialism, which is very heavily attached to the German occupation in the minds of the Greek society. Found inside the files and the personal computers of the leaders and members of Golden Dawn were several national socialist insignia, swastikas and ceremonies where Golden Dawn members were making an oath to the German flag, the German Reich flag, the Wehrmacht flag and the swastika. This is not a penal crime in itself as in the Greek penal system, no ideology is penalised, but it was crucial in the terms of this court, because it provided the motivation for the criminal acts of Golden Dawn. What the indictment was and what was revealed during the court was that the Golden Dawn, under the disguise of a political party, was making murderous attacks against its opponents, refugees, migrants, ideological and political opponents, under the direction of the leaders of the organisation. Of course, it was revealed that these attacks were against the weakest in our society and never against the powerful or the state. In reality the state either turned a blind eye to or collaborated in this criminal activity.

Cakir: What about the public opinion? Do you think social opposition had an effect on this decision?

Cakir: How do you evaluate the decision in terms of law and politics for Golden Dawn case?

The decision was very important because until now there were no decisions or convictions for the murderous attacks and murders that Golden Dawn members and cadre had perpetrated against migrants or against political opponents. A single member of the organisation was convicted and there was no investigation into the penal responsibility of the leadership of Golden Dawn. This is why the decision was so important and is the reason why the decision is so important in international terms. Because while there have been several trials of Nazi criminals and racist crimes, it is the first time in many decades that we had the conviction of the whole leadership of an organisation. It is also an important case for the Greek judicial system because there has been a state of impunity for far-right criminality for many decades. In Greece for historical reasons after the Second World War, the collaborators of the Nazis were never criminalised and never paid restitution for the crimes they committed during the years of the German occupation. The far right always had the advantage of being able to act as criminals with impunity. This is why for national and international reasons I evaluate this decision as a very important one.

Cakir: Once again thank you Thanasis and congratulations! Do you want to add anything more?

In that sense, our experience is very similar to the activity of the Progressive Lawyers Association in Turkey. As progressive lawyers, we need to do both, be active in both worlds. On one hand, represent our clients in court, people who in most cases would find it very difficult to find justice as they are the weakest in our society, working class, poor, migrants and refugees. On the other hand, fight outside the court as part of the antifascist movement and make our clients’ cause part of the wider fight of the progressive movements.

This is why we need to continue building solidarity, especially the people of Greece and Turkey, and we need to emphasize our common struggles, not just as lawyers but further as popular movements fighting against injustice, fascism, racism and the system that breeds them.

In 2017, she and other colleagues were unlawfully detained and arrested. She was not imprisoned, because her daughter was three and a half years old. However, after the judicial process, she was sentenced to eight years of imprisonment. She is currently living in Athens and awaiting the outcome of her asylum process. Her daughter is still in Turkey and her daughter’s father, also a lawyer, is in jail due to the legal process she endured.

Thanasis Karpagiannis was born in Trikala in 1978. He studied at Thessaloniki law school and has a Masters in Political Science and History from Pantion University in Athens, where he now works as a lawyer. He is an activist in the anti-capitalist left and the antiracist and antifascist movements. He is currently a member of the Board of the Athens Bar Association and with “Alternative Intervention” an organization of the radical left.