Discussions of China’s growing global presence normally refer to its large investments overseas and lending by the state-owned China Development Bank and China-sponsored multilateral institutions like the Asian Infrastructure Investment Bank and New Development Bank. But there has been a less highlighted instrument that has contributed to China’s growing global influence in developing countries worldwide–bilateral currency swaps between China’s central bank, the People’s Bank of China (PBoC), and the central banks in these countries.

These bilateral swap arrangements (BSAs), denominated in RMB and the currency of the relevant partner central bank, allow the latter to access RMB liquidity for short periods at relatively low rates of interest, in return for its own currency as implicit collateral. 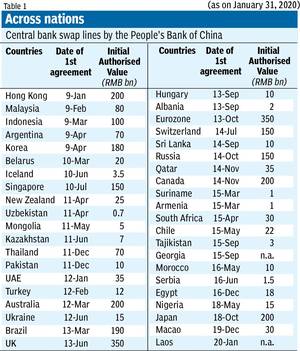 Between January 2009 and January 2020, the PBoC entered into such arrangements with 41 countries (Table 1). Most of these were put in place between 2009 and 2016 (Chart 1). Normally valid for a three-year period, many such arrangements have been repeatedly renewed, with the number of active agreements peaking at 33 in 2016 and standing at 27 by the end of 2019 (Chart 2).

Despite the slight decline in the number of active arrangements between end-2016 and end-2019, the total authorised value of such arrangements (or the maximum liquidity that can be availed through them) has been relatively stable, averaging RMB 3,333 billion between 2015 and 2019.

In a swap transaction, a central bank looking to access liquidity in foreign currency (in this case RMB) sells to the source bank a specified volume of its own domestic currency in return for foreign currency at the prevailing market (spot) exchange rate. The transaction also includes a commitment by the applicant to buy back its domestic currency with the foreign currency, on a pre-specified date in the future at the same exchange rate. When the second transaction is completed, the borrowing central bank also pays interest at a market-related rate, depending on the duration for which it has drawn on the swap line. 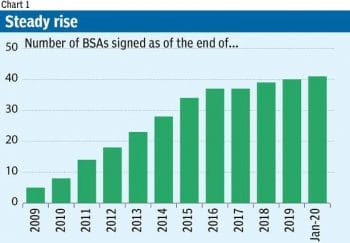 While it has access to the foreign currency liquidity line, the borrowing central bank can lend it to institutions and agents in its own jurisdiction that face shortages of foreign currency. In principle, access to swap-mediated liquidity in RMB allows the recipient country to temporarily finance any deficit in current account transactions with China or meet any commitments arising out of financial or capital account transactions with that country.

Given the importance of China as a provider of goods and a source of investments and credit to developing countries worldwide, and its effort to internationalise the RMB by designating an increasing share of those transactions in RMB instead of dollars, these swaps suit both China and its partners. 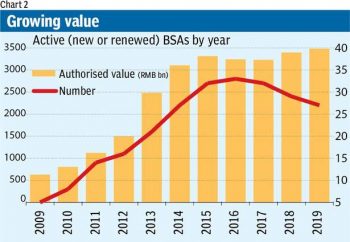 For partner countries, the higher is the share of RMB denoted transactions, and the greater the availability of RMB credit and swap lines, the larger their leeway in using available dollar earnings and reserves to settle transactions with other countries. They can also, as Argentina did, use or showcase their ability to use the RMB accessed through the swap line, to acquire dollars and shore up their dollar reserves to meet commitments to third parties.

For China, on the other hand, the swap line is an instrument that encourages partners to increase reliance on Chinese goods and RMB loans to buy them, enhancing thereby its economic influence, as well as furthering the goal of internationalising the RMB and establishing it as an alternative reserve currency.

Such developments played a role in creating conditions that prodded the IMF to recognise the RMB as a freely usable currency in 2016 and include it as the fifth currency along with the dollar, the euro, the yen, and the pound, in the Special Drawing Right (SDR) basket. It was also a source of support for developing countries, including strategically-placed, foreign exchange-starved neighbours like Sri Lanka and Pakistan.

But this has imposed a burden on China. The normal perception is that a swap arrangement is relatively riskless for the lender central bank. Since the exchange rate is the same in both the spot and forward transactions through which currencies are exchanged, if the transaction goes through, there is no exchange rate risk borne by the source central bank.

But if for some reason the borrowing central bank is unable to mobilise the currency of the source central bank to complete the forward transaction, the lender bank is left with collateral in the form of the currency of the borrowing country. In the circumstances, that currency is likely to have lost value relative to the exchange rate at which the swap was executed, resulting in losses for the lending partner.

This residual risk has influenced the swaps that other central banks have been willing to enter into. Though a large number of such bilateral arrangements are now in place globally, involving a wide range of central banks, till recently the U.S. Federal Reserve was the principal source of liquidity delivered through bilateral swap arrangements, given the dominance of dollar denominated transactions in trading and financial settlements. However, the Fed has been very selective about the central banks with which it has signed swap agreements, clearly influenced by its perceptions of where the activation of such arrangements will be relatively riskless.

Even at the height of the 2008 crisis, for example, besides the Bank of Canada, Bank of England, the European Central Bank, the Bank of Japan, and the Swiss National Bank, which are safe bets and with which the Fed had swap arrangements in the past, it chose to extend the net only to cover a set of developed country central banks in Sweden, Denmark, Norway, Australia, New Zealand, South Korea and Singapore, and only two developing country central banks in Brazil and Mexico.

Moreover, indirectly providing foreign commercial banks access to dollar liquidity ensured that investors in dollar assets from these countries, unable to replenish capital borrowed to make those investments, did not withdraw and disrupt U.S. financial markets.

As the listing of countries in Table 1 makes clear, this is not the principle that the PBoC has adopted. It has entered into swap arrangements with countries that have a record of balance of payments stress. And often the arrangements were put in place when the country concerned was actually stressed.

It is, of course, true that this was not purely the result of Chinese altruism. Rather, being a rising power jostling for space in the international order, China is willing to take the risk of loss to increase its economic presence and strengthen the role of its currency. That helps developing countries, which have largely been left out of the group covered by the Fed’s dollar-liquidity swap system.