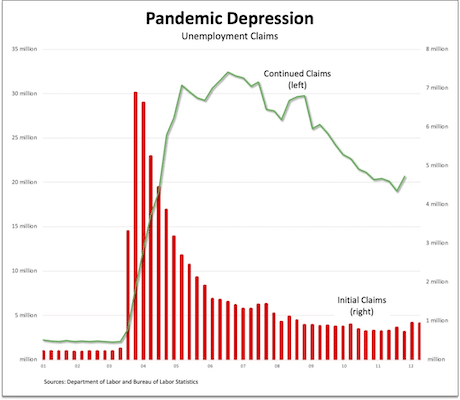 This morning, the U.S. Department of Labor (pdf) reported that, during the week ending last Saturday, another 935 thousand American workers filed initial claims for unemployment compensation. While initial unemployment claims remain well below the peak of about seven million in March, they are far higher than pre-pandemic levels of about 200 thousand claims a week.

The number of continued claims for unemployment compensation, while also below its peak, rose from the previous week and was more than 20.6 million American workers—a figure that includes workers receiving Pandemic Unemployment Assistance.* This means that, since the end of April, the number of continued claims has fallen below 20 million only once (and that to 19 million, toward the end of November).

To put this number into further perspective, consider the fact that the highest number of continued claims for unemployment compensation during the Second Great Depression was 6.6 million (at the end of May 2009), and in the week before the Pandemic Depression began there were only 1.6 million continued claims by American workers.

According to Gregory Daco, chief U.S. economist at Oxford Economics,

We are not moving in the right direction. With the looming expiration of benefits, it’s even more worrisome.

In the meantime, at least 3,611 new coronavirus deaths and 245,033 new cases were reported in the United States yesterday—two morbid new records. As of this morning, more than 17 million Americans have been infected with the coronavirus and at least 307,642 have died. That’s more than any other country in the world, a crisis continues to receive barely a mention from anyone in the Trump administration.**

The result will be new waves of business slowdowns and closures, which in turn will mean millions more U.S. workers furloughed and laid off. Widespread inoculations of the U.S. and world populations are still many months off. Therefore, in the absence of a radical change in economic policies and institutions, Americans can expect to see steady streams of both initial unemployment claims and continued claims in the weeks and months ahead.

**The last time I posted a chart of unemployment claims, in early September, some 6.1 million Americans had been infected with the coronavirus and 185.6 thousand had died.