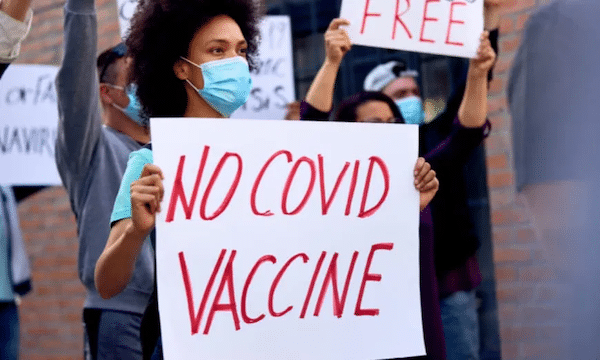 COVID-19 is a new disease, but many of us from immigrant families know all too well the trauma of having our livelihood threatened and our lives put in imminent danger of death. The pandemic situation is not too dissimilar to our life experiences. It is natural, especially for those who have been politicized, to look at it with a skeptical eye.

From the way governments have responded to the rolling out of the vaccinations, we know that the ruling class will not only mishandle the situation but actively take advantage of it to further their interests. However, we have to be careful in the information we consume as much of the skepticism gaining ground is based on conspiracy theories developed by opportunists who seek to gain profits from fear-mongering.

It is important to mention that there is a history, especially in the United States, of using science against working-class non-white people. Many Puerto Rican women, for example, were sterilized from the 1930s all the way up until the 1970s. The United States Public Health Service also deliberately infected Black people with syphilis between that same period in what is known as the Tuskegee Syphilis Study. A similar program was conducted in Guatemala in the 1940s by the same people.

There are many other historical instances in which Western institutions and governments have actively sought to use working-class non-white people as guinea pigs for their science, or more recently where they fail to provide adequate healthcare to non-white patients, especially Black people. Again, this historical experience means that our community has a justified distrust for Western science and means that we are more susceptible to being duped by conspiracy theories that play on those fears, consequently influencing our attitude towards the pandemic.

There is no evidence that the COVID-19 vaccines have been developed using non-white people as guinea pigs to be concrete. There is no evidence that the vaccines have been developed to work for certain races of people and not others. Although side effects have been reported, especially for people with serious allergies, there have been no deaths or serious illness resulting from taking the COVID-19 vaccines. The widespread argument in our community that we should wait to see what happens does not make sense. It only helps to delay a much-needed intervention as our community has been particularly affected.

Working-class Latin Americans in the diaspora have a justified distrust of the establishment. Many of us have been forced to flee our home countries due to extreme poverty and rife violence. These are conditions created by a global economic system that divides the world into those who benefit from capitalism and those who are victims. We may not always have the ability to perceive the intrinsic ways modern capitalism victimizes us. Still, we, as a community, understand deep down that there’s a system in place that was not built with us in mind.

However, this rational perception is sometimes misplaced, and we end up becoming allies with conspiracy theory organizations and their profit-seeking cult leaders. These are organizations whose goal is not to overturn the economic and political injustices we face but rather attract followers by playing on their real experiences and fears. Of course, this mass following can be as profitable as religious organizations, collecting donations from their supporters and followers.

Conspiracy theory cult leaders make insane amounts of money from social media posts widely shared throughout the world. For example, David Icke and his organization, one of the most widely shared conspiracy theorists who has led the misinformation campaign against COVID-19 and the vaccinations, has reportedly earned millions from Facebook and Youtube alone. They are not spreading their anti-establishment theories to help people understand the world, as they claim, but to use their fears to encourage them to put more money in their pockets.

As much as we are anti-establishment, we recognize that the vaccine trials have taken place for months and have involved tens of thousands of people. Although vaccines are usually developed throughout several years, they have never had the urgency and resources that these vaccinations have had. The swiftness in the development of these vaccines is a testament to the urgent need of global capital to resolve the pandemic; after all, they are the least interested in a further halting of the global economy. If there’s a fight to be had, it is with immediate access for our communities who are the worst hit as we are more likely to be exposed to the virus in our frontline jobs.

The Global South and access to the COVID vaccine

Internationally and domestically there is also a clear imperialist agenda to fastrack access and distribution to the vaccine to the rich first. Before mass distributions of the vaccine can even take place, imperialist nations have purchased most of the supply of the vaccines. According to Johns Hopkins Bloomberg School of Public Health, 51% of the vaccine doses have been purchased by nations only representing 15% of the world population. The primary nations in purchasing more vaccine doses than they actually need are the U.S. and UK. Nations that have the money to do so are pushing themselves and their populations to the front of the vaccine queue while the millions of those in the Third World are kicked to the back. Experts are now predicting that many “low-income” nations will not be able to effectively vaccinate their general population until 2024.

While creating an artificial scarcity of vaccine doses, imperialists in the United States continue their economic wars against sovereign nations. President Rouhani of Iran has repeatedly denounced the U.S. sanctions which are preventing Iran from purchasing the necessary medical equipment. For Venezuela sanctions have also been tightened and U.S. naval ships have been deployed off the coast of Venezuela in the midst of the pandemic. So at the same time that the imperialist North is hoarding vital medicine to treat a global pandemic, they are also restricting and complicating certain countries’ ability to acquire the vaccine through prolonged economic war.

The World Trade Organization has also weighed in on the vaccine debate, defending pharmaceutical countries by refusing to waive intellectual property rights around vaccine development. By waiving intellectual property rights, developing countries would have the ability to access information on how to develop vaccines, leading to more global cooperation, and a better ability for nations to create a vaccine locally and distribute it to their people. Not doing so, ensures that the pharmaceutical corporations that created the vaccines make billions in profit off of selling the vaccine and information related to it to other organizations, corporations, and governments.

What the recent series of events tells us is that vaccine access is distorted by global class divisions. The same will prove true for distribution of the vaccine in nations where distribution has begun. We were told for months that the first ones who will get the vaccine are essential workers, poor communities, and black and brown neighborhoods. As the time came for the vaccine to begin rolling out we saw what should have been expected, but was hardly discussed.

The morality of the rich and elite was proven to be a farce, the vaccine went and is currently going to people who can afford it due to their capital and wealth. At Stanford Hospital, nurses, frontline doctors, and medical students protested over the administration’s decision to distribute the vaccine first to senior faculty and administration before those on the frontline. U.S. Congresswoman Ilhan Omar came out in disapproval of the fact that Congress members are considered high priority and getting access to the vaccine before essential workers. Despite her criticism, many politicians have already received the vaccine and preferential treatment. This priority treatment for the rich capitalists should also come as no surprise as they have had this special treatment since the beginning of the outbreak.

When President Trump and later Rudy Giulani got coronavirus they were treated with experimental medicines which would have cost the average person an extreme amount of money. Giulani even admitted that being a “celebrity” gets one access to better medical treatment and procedures. The capitalists and their rich celebrity lackeys will continue to get preferential treatment for the vaccine despite all their high moral rhetoric around giving the vaccine to the poor first.

As socialists, organizers, and activists we all have an obligation to fight for the masses and expose the ills of society created by the exploitative elite. Going with whatever the popular trend is not what we are supposed to do. Our job is to disprove the propaganda and misinformation which is intentionally spread among our populations at their expense and for the benefit of the bourgeois class.

If socialists just went along with whatever is popular, Mao along with the Chinese Communists would have never ended the patriarchal conditions of the countryside, the Black Panthers would have never began armed patrols and resigned to only peaceful protests, and revolutionaries would have never engaged in revolution since the masses did not initially support them. Right now, we are facing a dire situation in our communities and in the homeland. The pandemic has caused an economic crisis the likes many have not witnessed in decades.

As we discuss the legitimacy of the vaccine, the groundwork is being laid for the rich across the globe to have priority access in the hopes that they can save themselves while the rest of us are left to die. Looking at imperialism, this issue is even more pressing as billions of people in entire nations are desperate for some alleviation from the chaos of the pandemic yet are being denied by the Western imperialists.

In desperate times like these, it is important to remind ourselves of the anti-imperialist and socialist history. I think back to the Young Lords party in New York City, and their takeover of Lincoln Hospital and later an X-ray unit. Lincoln Hospital is a hospital in the South Bronx, a largely Black and Latino neighborhood, that was underfunded and understaffed.

The Young Lords took over the hospital in the hopes of creating a community run program for drug addicts. After the police broke through their barricades and arrested about a dozen people, the Lords seized an X-ray unit a few days later and brought it to East Harlem and began to provide free door-to-door tuberculosis tests. When the people were left to die from preventable and curable diseases, it created an outrage so strong that the community took matters into their hands. If the rich and elite plan to do the same now and fail to care for our people, they should be reminded of what community power can achieve when pushed to the brink.